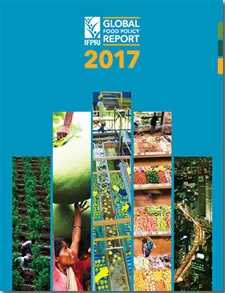 This year’s report looks at the impact of rapid urban growth on food security and nutrition, and considers how food systems can be reshaped to benefit both urban and rural populations.

The International Food Policy Research Institute (IFPRI) published its annual flagship report in March 2017. The Global Food Policy Report 2017 report reviews the major food policy issues, developments and decisions of 2016, and highlights challenges and opportunities for 2017 at the global and regional levels.

In addition to illustrative figures, tables and a timeline of food policy events in 2016, the report includes the results of a global opinion poll on urbanisation and the current state of food policy.

As rapid urbanisation continues around the world, poverty, food insecurity and malnutrition are increasingly becoming urban problems. This rapid shift is changing diets and reshaping food chains - from small farms to modern supermarkets. Going forward, policies and investments to end hunger and malnutrition must take account of the needs of poor urban populations and develop strong links between rural food producers and urban markets to support both rural and urban populations.

Linking rural agricultural producers to urban markets - including through physical, economic, social, and political connections - is crucial for ending malnutrition sustainably and for meeting other SDGs, according to the report.

Strong linkages between agricultural producers, particularly smallholders, and urban consumers can propel economic development and improve food security and nutrition for both rural and urban areas. Cities create opportunities for well-linked rural producers who can supply urban areas with nutritious foods while benefiting from larger, urban markets. These producers, in turn, invest in creating rural agricultural and non-agricultural economic opportunities.