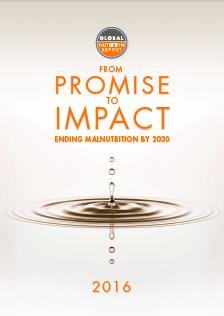 Malnutrition and diet are by far the biggest risk factors for the global burden of disease: every country is facing a serious public health challenge from malnutrition, notes the Global Nutrition Report 2016.

Over the past decade, momentum around nutrition has been steadily building, with governments and stakeholders around the world acknowledging nutrition as a key component of development. In 2015, the Sustainable Development Goals enshrined the objective of "ending all forms of malnutrition", challenging the world to think and act differently on malnutrition to focus on all its faces and work to end it, for all people, by 2030.

However according to the 2016 Global Nutrition Report released in June 2016 by IFPRI; despite some progress in recent years the world is off track to reach those targets. This third stocktaking of the state of the world’s nutrition points to ways to reverse this trend and end all forms of malnutrition by 2030.
The Global Nutrition Report presents new data on the cost of malnutrition to both societies and individuals. All of these figures mean that the burden of malnutrition falls heavily on all of us, whether directly suffering or not.

But these costs also represent large opportunities for human and economic betterment, and this report provides many examples of countries that have seized these opportunities to improve the lives of their people and the health of their societies by addressing malnutrition.

The Global Nutrition Report is the only comprehensive, annual review of the state of the world’s nutrition. It holds a mirror up to progress on meeting intergovernmental nutrition targets. It documents progress on commitments made on the global stage, and it makes recommendations for actions to accelerate progress. This year’s report focuses on the theme of making and measuring - SMART commitments to nutrition and identifying what it will take to end malnutrition in all its forms by 2030.