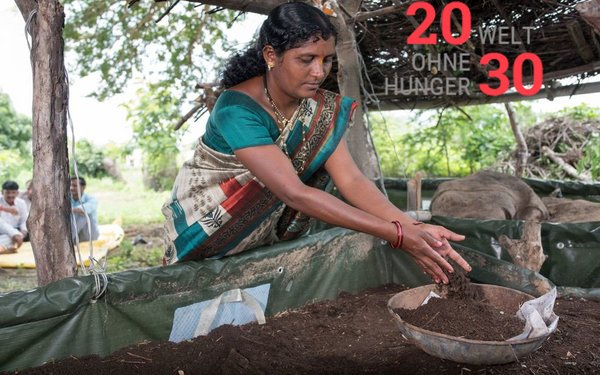 In India, the Green Revolution lifted millions of people out of poverty, yet the large-scale use of chemical fertilisers left the country’s soils severely depleted. ProSoil shows how Indian farmers join traditional and innovative practices to not only restore their soils but also mitigate climate change.

In India, agriculture’s Green Revolution ended hunger for millions of people. Yet in doing so, the large-scale use of chemical fertilisers to boost productivity has taken a severe toll on the sub-continent’s soil. Almost 40 per cent of the Indian landmass – 147 million hectares –is affected by land degradation, with 3.7 million hectares suffering from severe depletion of soil organic matter and nutrients. Land degradation is mainly driven by poor soil management and agricultural practices, improper irrigation, as well as the overuse of agro-chemicals and fertilisers.

Fortunately, the vital role of soil organic carbon is recognised by Indian farmers and policy makers and there is growing momentum around land management focused on soil health. India has ambitious plans to halt and reverse soil degradation in the agriculture sector in order to address associated challenges such as low farmer incomes, high agricultural input costs, and environmental degradation.

Implementing soc-rehabilitation on the ground

In India, the programme and its national partners promote the use of innovative soil inputs such as urban compost produced from organic municipal waste, and biochar. Together with further organic waste products such as cattle manure or compost, this plant-based coal is added as Terra Preta (‘black soil’) to the soil in order to increase its organic carbon, thus enhancing the ground’s carbon sequestration processes. At the same time, knowledge on indigenous and traditional regenerative farming practices like vermi-composting, farm-yard manure and green manuring is disseminated to farmers.

Evidence from two ProSoil project states in Maharashtra and Madhya Pradesh shows that efforts to improve soil health through sustainable nutrient and soil carbon management have resulted in more stable crops during dry spells and better yields compared to conventional production systems. In India, many states such as Andhra Pradesh, Himachal Pradesh, and Sikkim are already actively implementing large scale NF programmes. The Ministry of Agriculture and Farmers Welfare estimates that around 2.5 million farmers are already practicing NF. Initiated in 2020, the national programme on Natural Farming could become the largest carbon sequestration and soil health programme worldwide.

India and Germany also partner to promote holistic solutions for resilient agriculture and food systems such as agroecology. The upcoming Indo-German Lighthouse on ‘Agroecology and Natural Resource Management’ represents an opportunity to address issues that cause soil degradation from various angles – by promoting alternative paths of agricultural intensification that preserve diversity and existing traditional knowledge while unlocking the potential of modern technologies.

This article first appeared at weltohnehunger.org and is part of a media cooperation between Rural 21 and One World - No Hunger.