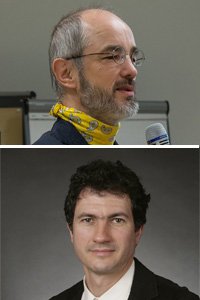 More commitment in the water sector!

Establishing a water goal in its own right in the SDGs is an important step in the right direction. However, global efforts need to be stepped up if the human right to water and sanitation is to become a reality and a global water crisis is to be averted, our authors Ingo Gentes (r.) and Michael Bender maintain.

The global community has failed to achieve the Millennium Development Goals (MDG) set by the United Nations for 2015 in the water supply and sanitation sector by 700 million people; in concrete terms, this means that one in three people – a total of 2.4 billion people world-wide – has no access to improved sanitation; every eighth individual – around 946 million people – practices open defecation; every tenth world inhabitant – about 663 million people – drinks water that is not potable water; 8 out of 10 people without access to safe drinking water live in rural areas.

According to World Health Organization (WHO) and UNICEF statistics, around 1.8 billion people take in water contaminated with faeces every day. Scenarios already compiled in 2012 for 2050 by the Organisation for Economic Co-operation and Development (OECD) forecast an increase in the inflow of nitrogen into wastewater on a global scale of more than 150 per cent, while phosphorous inflow is set to rise by 180 per cent; the report does not even refer to statements on various contaminants such as hormones or heavy metals. In addition, the OECD projects a global increase in freshwater demand of 55 per cent by 2050, and by then, more than 2 billion people will have joined the 1.7 billion already living in areas under water stress today.

The establishment of a water goal in its own right and the recognition of the human right to water and sanitation in the Sustainable Development Goals (SDG) of the 2030 Agenda for Sustainable Development can be regarded as a clear success by the international civil society water community. The sub-goals of the water SDG 6 comprise not only access to drinking water and sanitation but also the protection of water resources and ecosystems as well as efficient water use. Thus in terms of the subject addressed and the contents, the SDGs reach beyond the MDGs. The thematic fields of development and environment and the North-South Agenda are respectively linked to one another again.

Over the next 15 years, the implementation of the 17 SDGs is going to be monitored by a High-level Political Forum on Sustainable Development (HLPF) comprising a current 12 Member States. It will become the central UN platform for the support and monitoring of the 2030 Agenda. The HLPF is to spur the countries into pursuing a coherent policy, both internally and mutually, to implement the goals. However, whereas the effectiveness of many SDGs can be monitored via the various relevant UN organisations, such as the WHO (health) or the Food and Agriculture Organization (food), there is no such institution for the water sector.

With the expiry of the MDGs in late 2015, the mandate for some institutions linked with them, such as the UN Secretary General’s Board on Water and Sanitation (UNSGAB), also came to an end. Although UN-Water supports the various UN institutions via a water secretariat connected with the Department of Social and Economic Affairs, even after the Water Decade (2005-2015), it still has no mandate to directly negotiate with the Member States. In addition to strengthening this secretariat so that it can perform continuous monitoring of the SDG water indicators, the setting up of a UN Intergovernmental Committee on Water and Sanitation (UNCWS) as a permanent commission of the Economic and Social Council would be recommendable. Based on the binding mandate of a UN Resolution, such a platform would have more legal clout. In this manner, the High Level Political Forum (HLPF), and hence SDG 6, would thus become logistically embedded, and regular monitoring could be maintained. Progress towards the development goals relating to the water sector could then be commented more regularly than has been the case so far.

It is no coincidence that the water crisis should assume a prominent position in the ranking compiled by the World Economic Forum (WEF) 2015 on long-term global crises. More than 40 per cent of the world population are already living in areas calling for cross-border water basin management, and the tendency is growing. Improved governance is needed to strengthen local capacities in areas like data gathering and to achieve more effective monitoring and the implementation of legal framework conditions, including control and sanctioning mechanisms. Also, the international community has to take more determined steps to check corruption and collusion in sanitation. The impact of climate change can already be observed today with regard to the water balance. If we fail to recognise the relationship between water and climate, we will be risking our future. Water is a binding element, and not an isolated sector. Solutions in the systemic water cycle can only be brought about by institutions that are linked and that have a binding status themselves. The NGO community is going to support the development of the necessary prerequisites to achieve this.

Ingo Gentes is an international consultant for the water sector. Michael Bender heads the Federal Contact Office of the GRÜNE LIGA, reg. Ass., in Berlin/Germany.