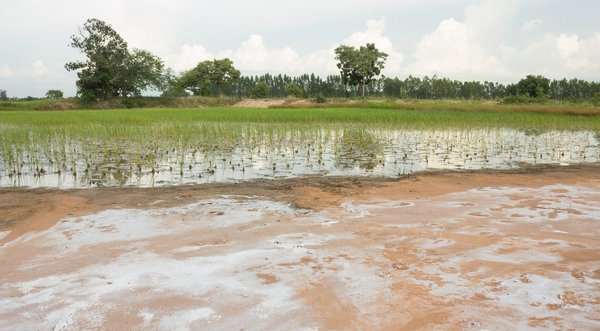 The goal of sustainable agriculture to feed the world requires more efficient, resilient and sustainable food systems, said FAO Secretary General Qu Dongyu at the Global Symposium on Salt-Affected Soils in mid-October 2021. Salt-affected soils, which account for around eight per cent of farmland world-wide, are threatening the achievement of the goal to get rid of hunger by 2030.

Many maps have been compiled in the past showing the extent of salt-affected soil. However, these have differed owing to fundamental differences in definitions. Furthermore, countries provided different data, so that not all regions were really always covered. Therefore, the basic activities required for the new map presented by Christian Omuto of FAO at the symposium mainly consisted of the different degrees of salinization and a harmonisation of the country data for an effective view of the global situation. According to the new map, around 833 million hectares of farmland, mainly in the arid and semiarid regions, have a salt content which is too high. This represents 8.4 per cent of productive land world-wide, and more than 1.5 billion people are thus threatened by soil degradation and the loss of or restrictions in food production.

Asad Sarwar Quereshi of the International Center for Biosaline Agriculture (ICBA), headquartered in the United Arab Emirates , explained the numerous reasons for high salt content. In addition to erosion of the parent rock, high salt content is caused by poorly managed irrigation and bad water as well as insufficient management of fields with wrongly graded slopes.

With his research results, Sharhabil Musa Yahaya of Ahmadu Bello University/Nigeria demonstrated how the degree of salinization can be reduced and rice yield can be enhanced with mulch consisting of rice husks and rice straw. This was achieved with around two tonnes of husks and straw in a one-hectare rice paddy. Ingredients are sufficiently available in the region and are currently not used as waste in other contexts. Measurements down to a soil depth of 20 centimetres showed that significantly more soil moisture was retained for the rice plants. Furthermore, by emitting calcium and potassium, husks and straw displaced sodium as a salt component in the soil.

Quereshi believes that, in addition to the above practices, politicians have to be held accountable. Irrigation always has something to do with drainage, which ensures that the salt deposits in the root area are washed out again. The countries affected should therefore introduce a pricing policy for water and energy to maintain efficient irrigation. Promoting gypsum as a soil fertiliser which binds salt and intensive consulting for farmers are further options. This would, for example, enable soils which start showing signs of salinization to be brought back to better soil fertility.

In lightly salinized soils, it is recommended to grow food crops bearing a certain degree of salt tolerance. In severely salinized soils, Quereshi maintains, cultivating halophytes could be a solution. Salicornia or Atriplex grow in mudflats and salty inland areas. With such biosaline plants, farmers can produce biomass which can be used as feed or to generate biogas. They provide farmers an additional income, improve soil health in the long term and prevent additional erosion.

Solutions have to be locationally adapted. This is what the new FAO salinization map is there for.