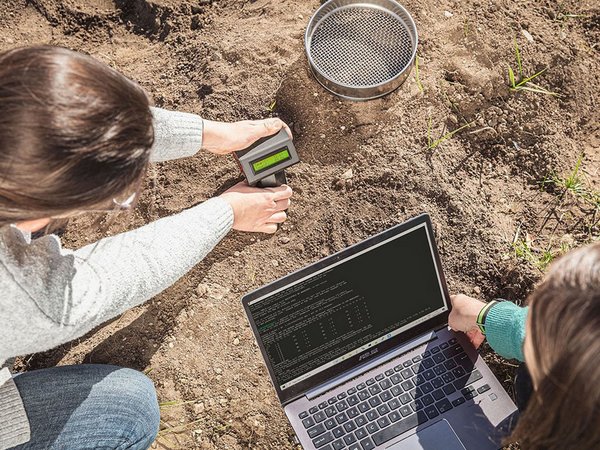 The measuring device Digit Soil is plugged directly into the earth. The first values can be read on the computer.
Photo: Kilian J. Kessler

Digit Soil – a check-up for the ground

Intense agricultural use of soil is causing its degradation in many areas. Now researchers at ETH Zurich in Switzerland have developed a rapid test for measuring soil quality on site. This should allow farmers to monitor the health of their land themselves in the future.

Improved and more continuous soil monitoring is sorely needed. According to the Food and Agriculture Organization of the United Nations (FAO), a quarter of all agricultural land was already degraded as of 2011. This means that such soil contains hardly any organic matter, which is where life-giving transformation processes take place. As insects and microorganisms decompose this dead plant and animal matter, using enzymes to break it down into its chemical components, they produce raw materials and nutrients for new plant growth. With advancing degradation, however, soil loses this ecological function and becomes barren.

To date inefficient and expensive tests

To determine how healthy agricultural soils are today, scientists test them regularly. However, the measurements are time-consuming and expensive, so testing is widely scattered and occurs at lengthy time intervals. Moreover, the soil samples aren’t evaluated on site, but rather in specialised laboratories. “This changes the conditions in the samples and can distort the results,” explains soil scientist Sonia Meller. In addition, various methods are applied in preparing and measuring the samples, so it becomes nearly impossible to compare results from different times and locations.
Against this background a team of ETH Zurich researchers around Meller and agriculture scientist Hélène Iven have developed Digit Soil, the first sensor to measure soil quality on site – quickly and cheaply.

Their new portable sensor is a small box roughly the size of a paperback novel which measures the activity of a host of enzymes responsible for organic material decomposition in the soil. These include phosphates, which break down chemicals containing phosphorous, glucosidases, which split sugar molecules, and proteases, which break down proteins.

The core of the sensor is a square-shaped membrane containing separate fields to which different molecules are applied as substrates for the soil enzymes. One unique feature of this approach is that the substrates contain a chemical component which fluoresces as soon as the enzymes begin acting on it. The sensor’s electronics measure the brightness of this fluorescence, and with it, the level of enzyme activity. All the tester has to do is press the sensor with its membrane into the earth and the results are saved to a USB stick in just a few minutes.

The measurements of enzyme activity provide a basis for conclusions about the soil quality and the effect of agricultural actions, such as tillage or the use of pesticides. Intensive ploughing, for example, eventually leads to lower enzyme activity due to a loss in organic matter. “This is a sign that degradation is beginning,” Iven says.

Nonetheless, processes in the soil are highly complex, and it is still difficult to derive direct recommendations for agriculture from the measurements. “We first have to examine more closely how enzyme activity, which we can now measure rapidly and in a standardised way, relates to soil quality,” Meller says, “and to do that, we need a huge amount of data.”

The team’s data collection efforts will soon get a boost from their first customers. Several researchers, including some at the Swiss Research Institute of Organic Agriculture (FiBL), are to begin testing the first version of the Digit Soil sensor this year. This data will then help Meller and Iven to validate their measurement methods and link the findings with processes in the soil.

Ultimately, the two scientists aim to use their rapid test to map how different actions affect the soil. They eventually want to offer the authorities a tool that will help provide sustainable support for soil health. In the future, farmers should be able to use the sensor themselves to monitor the quality of their land and the effects of their actions – such as what fertilisers and pesticides they should spray on their fields and which ones they would do better to avoid.