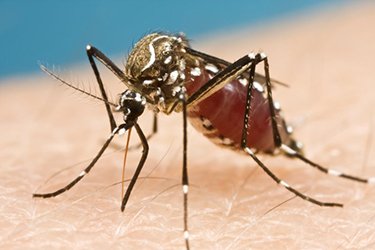 Zika-virus could not only be transmitted by mosquitos but also by humans via sexual transmission.
Photo: © Day Donaldson (flickr)

The Public Health Emergency of International Concern because of the Zika-virus was confirmed by WHO in March 2016. There is strong evidence that the Zika-virus not only causes several birth abnormalities, but there is also a link between Zika virus infection and GBS. Moreover, the virus could not only be transmitted by mosquitos but also by humans via sexual transmission.

The Zika virus may be responsible for more diseases that previously assumed. The World Health Organisation (WHO) has highlighted this aspect, confirming that there are still grounds for a Public Health Emergency of International Concern (PHEIC).

Microcephaly is now only one of several documented birth abnormalities associated with Zika infection during pregnancy. Grave outcomes include foetal death, placental insufficiency, foetal growth retardation and injury to the central nervous system.

Moreover, the growing evidence of a link with GBS (Guillain-Barré syndrome) expands the group at risk of complications well beyond women of child-bearing age. GBS has been detected in children and adolescents but is more common in older adults and slightly more common in men. GBS is a rare condition in which a person’s immune system attacks their peripheral nerves.

And there is more bad news on Zika-virus: Reports and investigations from several countries strongly suggest that sexual transmission of the virus is more common than previously assumed.

WHO prioritises the fight against Zika

WHO and experts prioritise vaccines, diagnostics and innovative vector control tools for Zika R&D, as they reported in March 2016. The following tools were prioritised as the most viable options to help fight the spread of Zika virus in the immediate future:

• Multiplex tests for ‘flaviviruses’ (viruses related to Zika, such as dengue, chikungunya), in addition to more traditional tests;

• protective vaccines based on killed virus (or other non-live) preparations for women of childbearing age; and

In early March 2016, 67 companies and research institutions were already working on a number of products (31 on diagnostics, 18 on vaccines, 8 on therapeutics, 10 on vector control), which are at various stages of early development. No vaccine or therapeutic has yet been tested on humans.