This year’s WorldRiskReport focuses on urbanisation, taking a look at the city as a risk area. It examines cities’ exposure to natural hazards and societal vulnerability to assess the disaster risks they face. 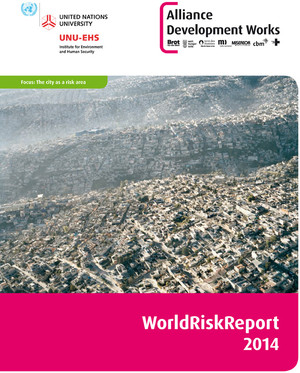 Rapidly growing cities in developing countries are particularly vulnerable to natural hazards. On the other hand, urbanisation concentrates many people in a relatively small area, making them more accessible so that their vulnerability can potentially be reduced. Issues like these are discussed in this year’s WorldRiskReport, which focuses on the city as a risk area. The report is published annually by Bündnis Entwicklung Hilft (BEH), representing seven relief organisations, and the Institute for Environment and Human Security of the United Nations University (EHS-UNU).

“World population growth is happening in the cities,” says project head and BEH Managing Director Peter Mucke. “More than half of the rapid urbanisation that we are witnessing is taking place in just seven countries, including India and Pakistan, which have just been hit by disasters.” Mucke stresses the report’s finding that people in cities often live more safely than those in rural areas. However, he adds that the increase in extreme weather events is putting more and more pressure on cities, especially in coastal areas.

Rapidly growing cities are particularly vulnerable to natural hazards, the report shows. The enormous increase in inhabitants leads to the formation of informal settlements and slums, often in areas strongly exposed to natural hazards, such as slopes and river banks. Twenty-two of the 34 cities growing at a rate of more than four per cent area are in Africa, with Burkina Faso’s Ouagadougou topping the world list at 6.13 per cent. Megacities like Dhaka, in Bangladesh, where an average 8,200 people live in one square kilometre, also play an important role for rural communities. Dhaka’s 5,000 factories employ around five million workers, with about 20 million relatives depending on their income in the surrounding regions.

The WorldRiskReport also contains the WorldRiskIndex, which assesses the disaster risk for individual countries through a combined analysis of natural hazards and social conditions. Vanuatu, the Philippines and Tonga head the list of the 171 countries examined. “Extreme natural events need not turn into disasters,” explains EHS-UNU’s Jörn Birkmann, head of the scientific survey. “The World Risk Report 2014 is based on the fact that disaster risk always consists of two factors: exposure to natural hazards and societal vulnerability.” Birkmann stresses that urbanisation and climate change are bringing about considerable changes in risks for numerous countries, with rapid urban growth raising the disaster risk related to natural hazards in some countries and lowering it in others.