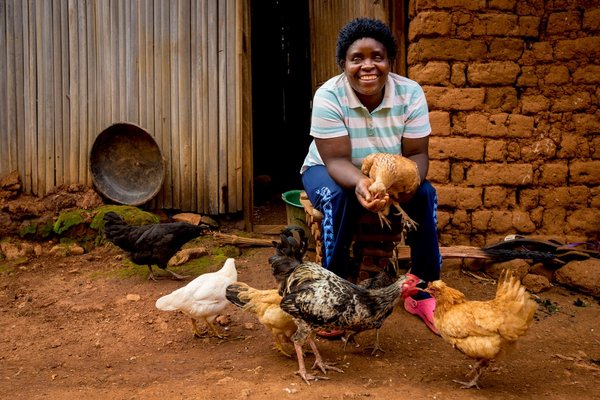 Today, Mourine Yilamonyuy is a farmer. She attended workshops to qualify for her new profession, and now, as a disabled woman, she can lead an independent life.
Photo: © CBM

Women and girls in developing countries continue to be victims of severe human rights violations. This has been pointed out by several relief organisations to draw attention to World Women’s Day, on the 8th March. But there is also encouraging news.

Women and girls in developing countries continue to suffer under severe human rights violations. Physical and sexual violence is widespread, and many girls are victims of genital mutilation, are infected by HIV or are forced to enter child marriage. For example, in the poorest countries, every eighth girl is married before reaching the age of 15 years. Not only does this worsen her educational prospects and aggravate poverty, as the German Foundation for World Population (Deutsche Stiftung Weltbevölkerung, DSW) notes on the occasion of World Women’s Day. Many girls die because they become pregnant far too early or are harmed physically and mentally for the rest of their lives.

Far away from decent jobs

The child relief organisation terre des hommes points to another phenomenon that affects girls in particular. According to the International Labour Organization (ILO), around ten million children are working in other people’s households – and more than 70 per cent of them are girls. Large numbers of them work in conditions comparable to slave-labour. Often, they live far away from their homes, in the house of their employer, where they are under constant control, have to perform chores that do not correspond to their age, have hardly any contact with the outside world and have to be available at any time. There is a high risk of these children becoming victims of discrimination, sexual abuse and exploitation.

The situation is especially difficult for disabled women and girls. In addition to the fact that, owing to their disablement, they have hardly any prospect of appropriate healthcare, education or regular income, exclusion and stigmatisation is often an additional severe problem. Particularly in rural regions, in which superstition is still widespread, disabilities are often regarded as judgement from above – with the corresponding social consequences for the victims. However, there are also encouraging examples.

Agriculture as an opportunity

Mourine Yilamonyoy, from Cameroon’s Northwest, had been successfully running a barber’s shop and maintained financial independence – until 2005, when, at the age of 33 years, a disease suddenly caused her to go blind. She had to return to her family, where she was confronted with considerable prejudice. Evil powers were blamed for her disease, and her father and older brother’s deaths were put down to her bad influence. Via a local association of people with disabilities supported by “Christoffel-Blindenmission” (CBM), Yilamonyou discovered workshops enabling her to lead a new life. Today, Mourine is a farmer who breeds pigs and chickens and has started a business trading palm oil with the money she has earned.

It was education that also saved Yetnebersh Nigussie’s future. Having grown up in one of Ethiopia’s rural regions and gone blind at the age of five years, Nigussi, today a lawyer and human rights activist, feels fortunate that she escaped the fate of child marriage thanks to going to school. In 2005, she co-founded the Ethiopian Center for Disability and Development (EDCC); in addition, she has been working as a consultant for the Light for the World organisation for several years. Not only was the thirty-six-year-old conferred the Right Livelihood Award in 2017, on the 2nd May 2018, she is also to receive the Spirit of Helen Keller Award. Founded in 2015, the welfare organisation Helen Keller International is committed to improving the lives of blind people and combating hunger and malnutrition. On this World Women’s Day, Nigussie will be announcing the inauguration of an international award for disabled women, the “Her Abilities Award”. This distinction will be awarded for the first time on the International Day of Disabled Persons, the 3rd December 2018.