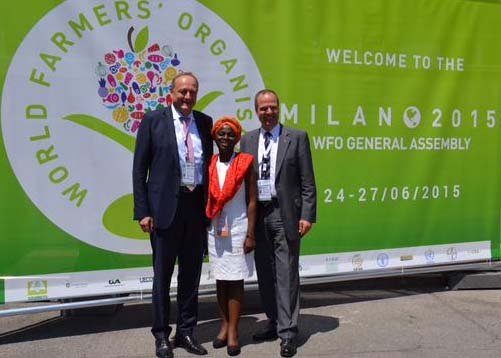 At the General Assembly of the World Farmers Organisation, its newly re-elected President Evelyn Nguleka called on farmers from all over the world to take up the challenge of also feeding the growing population in 2030.

The General Assembly of the World Farmers Organisation (WFO) was held in the framework of EXPO Milano in Milano, Italy, from the 24th – 27th June. Italy’s EXPO is being held in the Milano exhibition premises under the motto: Feeding the World – Energy for Life. The country pavilions and various theme clusters address the topic in impressive and highly diversified ways.
The annual WFO conference took up this topic and invited experts from politics, science and the international farming community to a panel discussion.
In his opening speech, Italian Minister of Agriculture Maurizio Martina stressed the efforts made by the Italian World Exhibition to centre on the topic of food and food security in the 21st century. Who but the farmers throughout the world were the chief actors regarding this topic? He was therefore particularly pleased that the WFO was holding its General Assembly in Milano.

WFO President Evelyn Nguleka, from Zambia, responded to Minister Martina by calling on the 66 farmers’ organisations represented at the meeting that the world’s farmers had to accept this challenge “to make sure that by 2030 nobody in this world goes hungry”. Nguleka stressed two important aspects in this context: food security and adapting to climate change. Sustainable agriculture was the only answer, and this was what the conference in Milano ought to consider in terms of solutions. In her speech, Nguleka added that this challenge could only be met in a joint effort by the public and the private sector, and with the support of science and experts. Politics, the private sector and science were also represented on the specialist panels reported on briefly below.

This session centred on the demand raised by all participants that the role of agriculture had to gain more esteem and that it ought to be regarded as an economic sector generating a profit. Only then would the younger generation remain in this sector instead of seeking a livelihood elsewhere. Only when farmers could reckon with a profit would they also invest and raise productivity, i.e. make their contribution to food security in the 21st century, the participants in this first session unanimously stressed.

Aggrey Mahanjana, Secretary General of AFASA (African Farmers Organisation of South Africa), demanded that “if we want to feed nine billion people, we must embark on new policies particularly to support small scale farmers. Farmers are not charity people, they need to make profit, otherwise they leave.” Mahanjana stressed that it was precisely for this interface between small-scale and profitable farming that new technologies were required.

In her presentation, Marcella Villareal of the Food and Agriculture Organization of the UN (FAO) explained what small-scale farming means: farming on an area of 0.5 to one hectare. And this included 72 per cent of these small-scale farmers. According to Villareal, it was these farmers who were at the centre of the UN Year of Family Farming, which was a great success. Numerous political and technological solutions were found and elaborated, for example appropriate machinery and equipment for small-scale agriculture in Brazil or Argentina or new small-scale credits offered by the Dutch Rabobank. However, these private approaches had to be supported by politics in order to develop the corresponding structures in the rural regions and eliminate financial bottlenecks, the FAO representative explained.
All participants also called for new political approaches and improved technologies to reduce the considerable food losses in all countries, in the North and in the South, which was also one of the chief concerns of President Nguleka. “Why do we waste so much food, and why are so many people obese, and at the same time, why must so many people go hungry?” she asked and demanded new nutrition patterns.

Italian nutrition expert Sergio Calabrese came up with inspiring answers from the angle of Italy, drawing the attention of the participants to the Mediterranean diet, which was regarded as sustainably healthy because of its content of just 30 per cent protein and 70 per cent vegetables, fruits and carbohydrates. He demanded that plant proteins be given a much greater focus in the debate over a balanced diet.
The competitiveness of family farms was a further important discussion item in Milano. The topic was addressed by the President of the Italian Farmers’ Federation Coldiretti, Robert Moncavo. “Farmers produce a lot of food but are challenged by cheaper food on the markets,” Moncavo complained. This applied for example to the Italian rice sector, which was suffering from cheap imported rice. His proposal for a solution regarding sustainable agriculture was a consumer-centred, local agricultural production and a focus on regional specialities that were suitable for export. The Farmers’ President said that Italy was fortunate in this respect, and using the country as an example, he showed how the Italian food industry had tapped new markets with these specialities. Its partners had to be the many family farms that were able to sell their products at competitive prices.

Not only is agriculture a key actor in food security in the 21st century, but it is also the biggest CO2 emitter, which caused all participants of the WFO conference in Milano to conclude that farmers had to produce more in future but had to do so using fewer inputs and with climate-friendly production methods. This demand was also enshrined in the Declaration of Milan that the farmers’ federations organised in the WFO had adopted at their General Assembly on the 25th July.
According to Joachim Rukwied, President of the German Bauernverband (farmers’ federation), the end of the fossil era, heralded by the energy transition in Germany, was the right point in time for the application of new, environmentally friendly technologies, such as no-tillage agriculture, precision agriculture with the aid of GPS, a more targeted use of fertiliser and pesticides, and incorporating bioenergy in the operation of farming machinery.

Carlo Lambro, Brand President of New Holland Agriculture, presented New Holland’s Clean Energy Leader® strategy launched in 2006, and made specific note of the Energy Independent Farm concept, designed by New Holland, the first example of a virtuous energy cycle. It is formed upon the idea that farmers can free themselves from the constraints of fossil fuels by ‘growing’ their own energy sources, like solar, wind or biomass, to generate energy for operating the farm and its agricultural equipment.

Agriculture would always remain a emitter, the representative of the International Fertilizer Association (IFA), Charlotte Hebebrand noted; mineral fertiliser was also contributing to CO2 emissions. However, targets had to remain realistic, and adaptation to climate change was the premise to set out from. There could be no secure agricultural production without fertiliser, Hebebrand stressed and explained that the fertiliser industry was opting for more efficiency in applying fertiliser with the aim of halving CO2 emissions.

In addition to climate change issues and water management, the retention of soil fertility is of major concern to farmers. Matteo Bartolini, a farmer from Southern Italy Chairman of the European Council of Young Farmers, presented an interesting approach to efficient water use. With the aid of daily soil samples, he was precisely determining the true water requirements of cropland, achieving growing yields with a minimum of water consumption.
Water and lower carbon emission levels were at the centre of the presentation given by Sok Sotha, managing director of the Cambodian Farmers Association. He described soil conservation and efficient water use measures. Cropland on small farms in particular was often covered with plastic to protect the soils; furthermore, the family farmers were trained in options to maintain soil fertility. Making use of the annual floods along the Mekong, Cambodia’s lifeline, for irrigation and fertilising of soils was an additional measure.

In the subsequent open plenary discussion, the conference participants once again stressed the considerable need for new technologies and better methods, with a focus on the carbon cycle, the energy cycle and more efficient water management and, last but not least, a better quality and more efficient use of fertiliser.
Towards the end of the session, a farmers’ federation president from Southern Africa called on the farmers attending the meeting to regard the demands imposed on agriculture by a growing population and by climate change as a great opportunity to create a new image for agriculture and reposition of the agricultural sector as an important branch of the economy.