International trading in farm output has only been practised on a large scale since roughly 1800.
Photo: FAO/Giuseppe Bizzarri

Will the world be able to feed itself adequately in 2030? Yes, our author maintains – provided that countries opt for lifting trade restrictions and thus ensuring an optimum and sustainable use of the world’s scarce resources. A brief history of international agricultural trade and some suggestions.

Long-distance agricultural trade has contributed to global economic growth and poverty reduction for millennia, but only in recent centuries via international trade in major foods. Its predominant contribution in earlier periods was through trade in crop seeds or cuttings, breeding animals, and farm production technologies. Since 1800, the ever-lowering cost of international commerce gradually allowed trade in farm outputs in raw or processed form. That has led to the prices of farm and other products converging within and across countries and indeed continents. Hence prices of labour and capital are also converging.

However, trade restrictions at national borders have limited international trade between relatively lightly populated economies that are well-endowed with agricultural land and those that are densely populated – as have sectoral and exchange rate policies. Price convergence across space and the efficiency of global resource use in agriculture are therefore less than they could be. This is worrying. If global food availability is to keep up with the growth in food demand, the productivity of resources employed in agriculture needs to increase. That can certainly happen by investing more in agricultural research, but it is expensive and involves decades to yield results. A far more-immediate and lower-cost way to enhance global food availability and thus security is by reforming policies that are distorting food prices and trade.

Openness of each national economy to international trade and investment optimises the use of resources devoted to producing the world’s food, it maximises real incomes globally, and it minimises fluctuations in international prices and quantities traded. It should therefore be considered among the food policy options of national governments seeking to reduce poverty and hunger, to boost diet diversity and food safety, and to raise food quality. All these dimensions contribute to national and global food security.

The evolution of food trade patterns since 1960

Developments in global agricultural trade, ‘revealed’ comparative advantage and net trade specialisation in farm products over the past five decades are broadly consistent with expectations from trade theory, even though trade patterns have been distorted (as well as having been shrunk) by anti-trade policies, particularly in sub-Saharan Africa but also in countries such as Argentina. Some people worry that this has led to national concentration in both the commodity and country shares of global exports of farm products: as of 2014, just eight items made up half of all international trade in agricultural products (oilseeds 12 %, meats 10 %, grains 9 %, dairy products 6 %, tree-crop beverages 5 %, grapes and wine 3 %, sugar 3 % and cotton 2 %), and two-thirds of the world’s exports of farm products are accounted for by just a dozen agricultural trading economies (treating the EU28 as a single economy). However, it is a consequence of little food production being traded internationally that just a few countries dominate each product’s international trade (see Table). 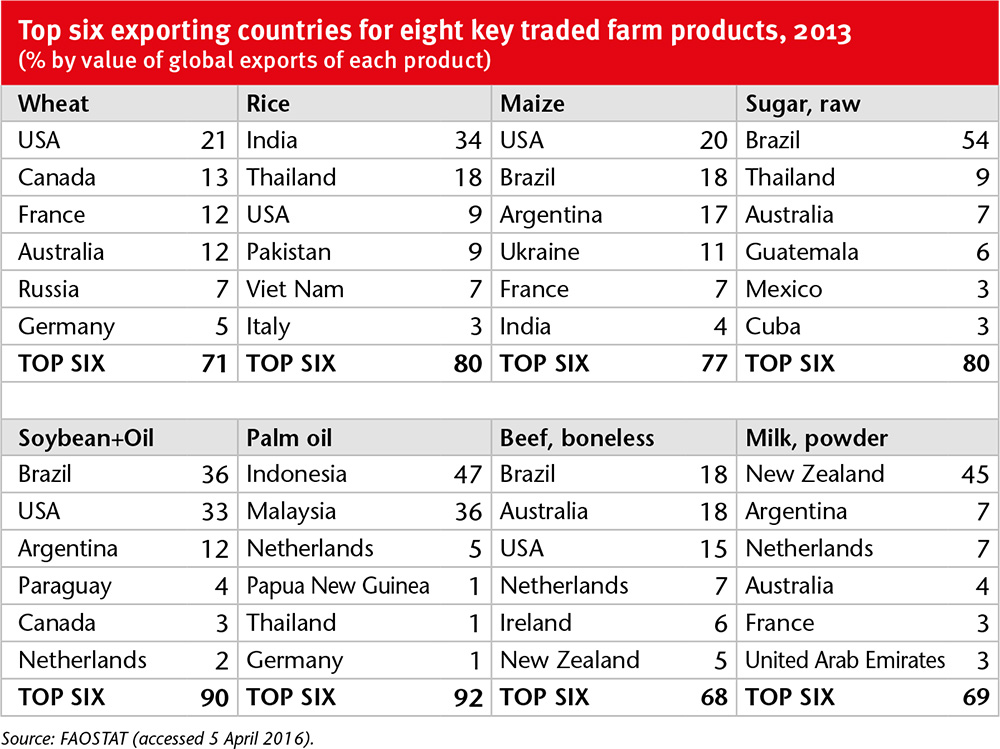 Gradual reform to market-distorting policies since the 1980s

Agricultural protection and subsidies in high-income countries have been depressing international prices of farm products for many decades, while governments of many newly independent developing countries maintained policies that depressed the incentive to invest in farming (directly, as with export taxes, and also indirectly, as with tariffs on imports of manufactures). Since those policies had an anti-trade bias, the quantity of farm products traded internationally was less, which made international food prices ‘thinner’ and thus more volatile.

From the mid-1980s, however, many countries have been reforming their trade-related policies. Specifically, countries have reduced their distortions to domestic prices: high-income countries have cut import tariffs and removed export subsidies, and developing countries have phased out almost all export taxes, for example. When placed in historical perspective, the reforms since the mid-1980s have been as dramatic as the policy changes in the preceding three decades.

Those developments are made clear by estimates over the past half-century of the so-called nominal rate of assistance by governments to agriculture, which is the percentage by which gross incomes of farmers have been altered by national farm policies. Weighted averages of these are shown for high-income and developing countries in the Figure.

Despite those policy reform trends over the past three decades, most countries continue to insulate their domestic food markets from the full force of short-term fluctuations in international prices. This means that, since plenty of diversity in price distortions remains across countries, and across commodities within each country, the world’s resources are still far from optimally allocated towards agriculture.

Global economy-wide modelling results suggest that reforms over the two decades to 2004 brought the world a remarkable two-thirds of the way towards free trade when measured in terms of global economic welfare, benefiting developing countries proportionately more than high-income countries.

Had the remaining policies as of 2004 (the final year of implementing the World Trade Organization’s Uruguay Round agreements) also been liberalised, developing countries would have gained nearly twice as much as high-income countries, further closing the income gap between high-income and developing countries. Of those prospective welfare gains from completing the global trade liberalisation process, two-thirds would be generated by agricultural policy changes, even though agriculture accounts for less than one-tenth of global GDP and trade. Such is the degree of distortions still remaining in agricultural markets compared with those in other sectors – and the policies of developing countries are as responsible as those of high-income countries for those foregone gains.

Model results suggest the world probably would see less people fall into poverty when international food prices spike if all countries agreed to abstain from altering trade restrictions in the hope of insulating their domestic markets from such spikes. For example, developing country governments prevented an estimated 82 million people from temporarily falling below the 1.25 US dollar a day poverty line in 2008 had those government responses had no impact on international food prices. However, because those actions exacerbated the international price spike, the number of people saved from falling into poverty by that insulating behaviour is estimated to be less than the number of those pushed into poverty, by 7.5 million.

Prospective effects of (or requiem for?) the WTO’s Doha Development Agenda

Empirical modelling of trade reform options make clear that there is a great deal to be gained from liberalising merchandise – and especially agricultural – trade. If it were done multilaterally under the WTO’s Doha round, a disproportionately high share of that potential gain could go to developing countries (relative to their share of the global economy). Moreover, the poorest people in developing countries are most likely to gain from global trade liberalisation, namely farmers and unskilled labourers in developing countries – provided developing countries did not demand Special and Differential Treatment (which gives the government of each developing country the freedom to shoot their own economy in the foot). To realise that potential gain, it is in agriculture that the greatest cuts in bound tariffs and subsidies are required. However, the political sensitivity of farm support programmes have made a Doha agreement elusive, and, unfortunately, regional and bilateral trade agreements have not been any more able to free up food trade than has the WTO.

The world has the potential to feed everyone in 2030

The world will be able to feed itself adequately in 2030, and at international food prices that in real terms are not greatly different from those just before the global financial crisis and food price spike period of 2008–12. Asia (most notably China) will continue to become more important in the global economy, and especially in markets for primary products. That opens opportunities for natural resource-rich economies in sub-Saharan Africa, South America and elsewhere to raise their own incomes by expanding their trade with Asia, and more so the faster Asia grows. But agricultural trade would grow less, as would global food security, the more agricultural protection rises in emerging economies in Asia and elsewhere. The drift in high-income countries towards protectionism in some manufacturing areas in recent years, in response to anti-globalisation lobbying, sets a bad example for developing countries to follow for their import-competing farmers.

Open markets maximise the benefit that international trade can offer to boost global food security and ensure the world’s agricultural resources are used sustainably. The decline in costs of trading internationally reinforces that benefit from reforming price-distorting policies, as does climate change. If global warming and extreme weather events are to become more damaging to food production, then all the more reason to be open to international food markets and allow trade to buffer seasonal fluctuations in domestic production. The more countries that do so, the less volatile international food prices will be. Developing countries concerned that poor households would be too vulnerable if food markets were unrestricted can now invoke generic social safety net measures such as conditional targeted income supplements, focusing them on the most vulnerable households.

Where trade and technology policies interact: what role for GMOs?
Concerns that products containing genetically modified organisms (GMOs) may be unsafe as food or animal feed, or may harm the environment, have led numerous European countries to procrastinate on approving their production or use despite no evidence of their harm. This policy stance, which has discouraged many developing countries from adopting too, is unfortunate: modelling results show that GM crops offer welfare gains that could alleviate poverty and food insecurity directly, substantially, and relatively rapidly in countries willing to allow adoption of this new biotechnology. The stakes in this issue are very high, because the prospective gains from this new technology will increase as climate change proceeds, forcing farmers to adapt to warming and to increased weather volatility and higher costs of irrigation water.