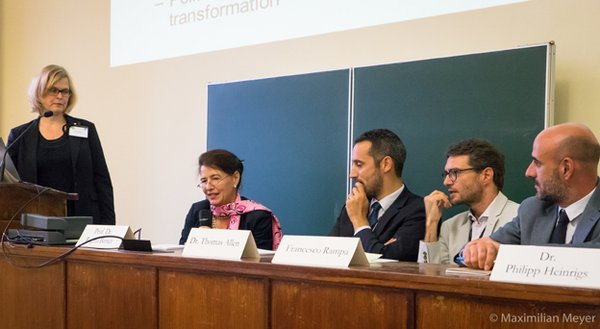 Why is Africa not feeding itself?

One of the priority goals that the African Union had set itself was to eliminate hunger on the continent by 2025. In order to reach this goal, regional trade has to be made more efficient, as a workshop held in Bonn/Germany revealed.

“Africa has all options to feed itself! – The continent can feed itself! This is not a phrase but a political target.” With these words, via video message, Commissioner for Rural Economy and Agriculture at the African Union Commission (AUC) Tumusiime Rhoda Peace greeted the participants of a workshop in Bonn, Germany, that was organised by Deutsche Gesellschaft für Internationale Zusammenarbeit in late September 2016. The Commissioner stressed that one of the priority goals that the African Union had set itself was to eliminate hunger on the continent by 2025. In concrete terms, this meant that the agricultural sector and agribusiness were focal issues in the AU’s future strategies. Peace added that a modern agricultural sector held the greatest potential to offer the growing number of young people employment. She maintained that one of the keys to the development of the agricultural sector was regional integration. The AU was seeking closer co-operation with the private sector in order to make the value chains competitive and put a transformation of the agricultural sector into practice. “Africa needs knowledge support to transform its agriculture,” she told the participants of the meeting.

Africa’s rapidly growing population and the massive expansion of cities is probably the biggest challenge it is currently facing. In addition, the eating habits of the city dwellers are different from those of their sisters and brothers in the rural areas. Philipp Heinrigs of the Sahel and West Africa Club (SWAC), Paris, France maintains that this is both a challenge and an opportunity for regional and local markets. Heinrigs estimates that the demand for processed food und higher value food in the cities is at around 39 per cent of overall food demand, making an adaptation of value chains absolutely essential. He maintains that technologies along the food chain such as further processing and packaging methods need to be modernised as quickly as possible in order to meet the demand from the conurbations. Moreover, he says, quality standards have to be raised. This, he believes, is not only up to the agricultural politicians in the developing countries of Africa. Rather, they have to make a concerted effort with industrial and trade politicians.

Henrigs regards pricing policy as the second big challenge. At the moment, he maintains, urban dwellers in the countries of the Sahel are spending around 50 per cent of their income on food. Henrigs calls for regional food-trade flows and a political focus on a growing food economy that can also provide more and better-paid jobs.

Francesco Rampa of the European Centre for Development Policy Management – ECDPM, Maastricht, Netherlands was critical of the development of food markets in Africa, maintaining that they were too fragmented due to a lack of infrastructure, tariff barriers and overlapping economic agreements. Rampa fears that because of this, economies in Africa are losing billions of dollars. He maintains that, among others, those responsible for the stagnation in regional trade are national elites who are more keen to finance infrastructure for commodity export than to invest this money in the integration of regional trade links.

Food trade can be extremely risky, particularly for trade women, Rampa warns. For poor and unguarded routes to the market frequently lead to acts of violence and sexual harassment along the numerous borders. “They are happening every day,” Rampa stressed.

Ways out of the dilemma – corridors

Rampa and the discussion round following the presentations emphasised that the biggest bottlenecks in regional trade in Africa were the large number of national borders, poor infrastructure for cross-country traffic and too many economic and other agreements and non-tariff barriers. They called for a strengthening of all stakeholders. This had to start with the introduction of improved technologies on farms, go on with the introduction of so-called corridors for trade routes along which food transports could be brought from the producer to the end-consumer as quickly as possible and without obstacles and ultimately include public private partnership initiatives to promote investment in regional trade.

One example the panel members referred to was TradeMark East Africa (TMEA), a multi-donor funded trade facilitation agency that has created a corridor from the landlocked Central African states to the port of Dar Es Salaam by setting up a Transport Observatory Platform following negotiations with Kenya’s neighbours. The Observatory continuously monitors the performance along the Central Corridor by identifying total time delays from all possible causes as a means towards establishing an evidence-based regional platform that can be used by the stakeholders as an operational tool as well as by the region’s policy-makers.

Creating corridors also facilitated a formalisation of the market prices, the panel members stressed. Nowadays, market information systems via smartphone were well-established in Africa. All that still had to be done was to “regionalise” them. Digital information dissemination could also contribute to disclosing widespread bribes at borders, Rampa maintained in the discussion.

Rampa referred to a joint initiative by CAADP (the Comprehensive Africa Agriculture Development Programme) and COMESA (the West African Economic Union) to set up a Regional Investment Programme in Agriculture with the main objective to remove barriers to agricultural trade and better link farmers to markets and regional value chains as a further example of how regional trade could be made more efficient.