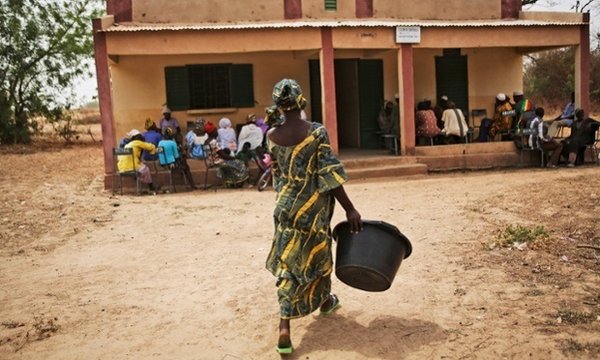 A nurse carries a tub that is used to bring clean water to the community health centre for women in labour, in a Malian village.
Photo: © Tara Todras-Whitehill/WaterAid

Findings in a multi-country review on water, sanitation and hygiene (WASH) services in health care facilities are sobering. Drawing on data from 54 low- and middle-income countries, a news report by the UN World Health Organisation (WHO) and UNICEF concludes that 38 per cent of the global population lack access to even rudimentary levels of water.

According to an article by “The Guardian”, alarming figures on a lack of clean water in health centres have been highlighted in a joint report published on 17 March by the World Health Organisation (WHO) and the United Nations Children’s Fund (UNICEF). As Bruce Gordon, co-ordinator of water, sanitation, hygiene and health for the WHO, noted, access to water in health centres and even in delivery rooms has fallen between the gaps in the Millennium Development Goals. “It’s an embarrassment for the health sector that this issue is so ignored. It’s a fixable crisis,” he added.

Dirty water and the lack of safe toilets are among the top five killers of women worldwide notes the report. Without these basic facilities, health centres cannot adequately prevent and control infections, placing mothers and children at risk during delivery. Where latrines are not provided, mothers in labour may have to go outside to relieve themselves, and tend to leave health facilities within hours of giving birth, leaving little time for them to receive advice and support.

Drawing on data from 54 countries, the report covers more than 66,000 centres. But the data is likely to overstate actual access significantly, since most surveys merely note the presence of water within 500 metres of the health centre rather than indicating whether supplies are piped, safe to drink or year-round.

The report is a first step towards a baseline study as NGOs and health organisations encourage governments, donors and stakeholders to make water, sanitation and hygiene (WASH) in health contexts both a higher political priority and measurable as part of the new Sustainable Development Goals. Better data is crucial for Wash access to be included in indicators on health, education and gender goals.