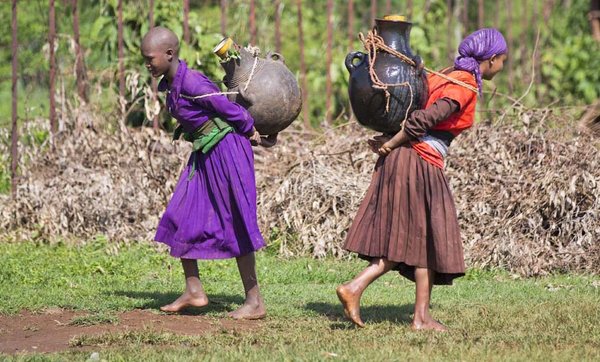 Eight out of ten people in rural Africa have no access to safe water.
Photo: © UNICEF/ETHA20130084/Ose

Five years after recognising water and basic sanitation as a human right, this right still remains beyond the reach of millions of people the world over. According to the latest UNICEF and WHO estimates, 663 million people are still without safe drinking water and for 2.4 billion people neither toilettes nor latrines are available.

According to the report, access to improved drinking water sources has been a major achievement for countries and the international community. With some 2.6 billion people having gained access since 1990, 91 per cent of the global population now have improved drinking water – and the number is still growing. In sub-Saharan Africa, for example, 427 million people have gained access – an average of 47,000 people per day every day for 25 years.

The child survival gains have been substantial, says the report. Today, fewer than 1 000 children under five years die each day from diarrhoea caused by inadequate water, sanitation and hygiene, compared to over 2 000 15 years ago.

On the other hand the progress on sanitation has been hampered by inadequate investments in behaviour change campaigns, lack of affordable products for the poor, and social norms which accept or even encourage open defecation, the UNICEF/WHO report warns. Although some 2.1 billion people have gained access to improved sanitation since 1990, the world has missed the MDG target by nearly 700 million people, complains the report. Today, only 68 per cent of the world’s population uses an improved sanitation facility – 9 per cent points below the MDG target of 77 per cent.

Plans for the new Sustainable Development Goals (SDGs) to be set by the United Nations General Assembly in September 2015 include a target to eliminate open defecation by 2030. This would require a doubling of current rates of reduction, especially in South Asia and sub-Saharan Africa, WHO and UNICEF say. The two organisations note that it is vitally important to learn from the uneven progress of the 1990-2015 period to ensure that the SDGs close the inequality gaps and achieve universal access to water and sanitation. To do so, the world needs:

Progress on sanitation and drinking water 2015 update and MDG assessment