The concept of nutrition-sensitive agriculture addresses the relationships between agricultural production, human nutrition and health by focusing on the nutritional outcomes of farming and food systems. This article discusses ways in which seed issues are related to the concept, and suggestions are made for addressing such relations when designing seed-related policies.

Nutrition-sensitive agriculture (NSA) strongly relates to the definition of food and nutrition security, which is based on the three pillars of availability, access to and utilisation of food, with stability being an inherent feature of all three. Hence, when looking at how the issue of seed is linked to NSA, it could be a first step to explore how it is linked to these pillars (see Figure).

Seeds and the availability of food

Seeds are the basis of all agricultural production. Unlike other agricultural ‘inputs’, such as fertilisers or pesticides, they are indispensable. So in order to produce food, farmers need seed at the time of sowing. Therefore, a functioning seed system which makes seeds available in sufficient quantity and quality and at the time needed is an important prerequisite for ensuring food availability in a country. This task alone is not trivial to perform: in many developing countries, it is a challenge to ensure that seeds from the formal breeding and seed sector reach distribution points in rural areas when they are needed. Farmers are keen to retain seeds from their own harvest because, apart from avoiding costs, this makes them independent from external supply. Decentralised seed production and distribution systems can thus be important elements of food and nutrition security, particularly where extreme weather conditions such as floods or landslides occur frequently and make it difficult to supply farmers in remote areas with seeds produced elsewhere.

Not all varieties realise their full yield potential under less favourable growing conditions. Adaptation of varieties to soil and climate is therefore an important factor in helping to ensure availability of adequate quantities of food. Such inherent traits may be found in seeds of certain varieties, either as a result of farmers’ own selection, or of science-based plant breeding. In areas where climate and soil conditions are highly variable, farmers tend to adjust the land area allocated to certain crops and varieties every year, based on their latest observations and past experiences. Hence, seeds of a range of varieties have to be at their disposal at the time of sowing in order to mitigate effects of variable production and climate conditions, and to make farming and food systems more resilient. 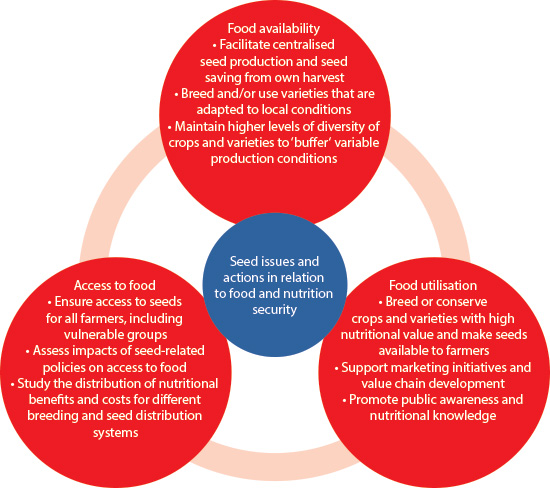 Not only the physical availability of seeds but also the individual’s entitlements to access them are important for food and nutrition security. The price of farmer-produced seeds is usually much lower compared to certified seeds from the formal sector. Farm-saved seeds are of outstanding importance in developing countries; for many crops of ‘minor’ economic importance, they are even the sole source of seed. Hence, the possibility for farmers to use their own seeds or to locally borrow, exchange or purchase them from family members or neighbours ensures their access to seeds, also in emergency situations.
Variety protection and seed laws can affect farmer-managed seed systems, with different impacts on various groups of people, depending e.g. on gender, ethnic affiliation or wealth group. Such laws have a potentially large impact on food and nutrition security, since not only rural families, but also urban populations depend on the farmers’ ability to access seed of a range of crops in a variety of situations. Whether the increase in production costs that is associated with the use of ‘modern varieties’ and ‘improved seed’ is outweighed by potential nutritional benefits, e.g. improved quantity and quality of food consumed, should be carefully assessed for the specific conditions found in each country and for different groups of farmers and consumers.

The utilisation aspect of food and nutrition security entails issues such as quality losses during storage and processing, and nutritional quality of the food items used, as well as the preparation and composition of meals according to dietary needs of individuals. Post-harvest quality and nutrient content are determined by genetic traits of crop varieties used, besides other factors. These traits can be enhanced or maintained through breeding and targeted selection. Many traditional crops and varieties contain high levels of micronutrients, and screening of germplasm collections for nutritionally relevant traits shows that there is considerable genetic variability in important food crops. Nutritional quality has, however, not played an important role in most breeding programmes in the past, so that the potential of plant breeding to contribute to nutritional improvements has remained largely untapped. Some plant breeding programmes, such as the AgroSalud and Biofort programmes in Latin America, or breeding initiatives under the A4NH of CGIAR and HarvestPlus (see page 9), have focused especially on increasing the micronutrient contents of crops such as sweet potatoes, cassava, maize, rice, wheat, pearl millet and beans, to address widespread deficiencies (‘hidden hunger’). Whether farmers can use such nutritionally valuable crops, either new or traditional ones, depends on whether they can access seeds of these varieties, and whether their cultivation is rewarded by their market partners. Hence, supportive measures may be required in order to raise public awareness and create marketing opportunities. Where traditional seed production and distribution networks become weak, alternative pathways may gain importance, e.g. seed fairs, seed producer networks or community seed banks.

Furthermore, dietary needs of individuals differ, e.g. depending on sex, age and health status. Preparing food according to individual dietary needs requires nutritional knowledge, diversity of foods to choose from, and possibilities of access. Hence, to support the utilisation dimension of food and nutrition security, farmers need seeds of a range of nutritionally valuable crops to provide their own families and communities as well as urban consumers with nutritious foods the whole year round, from which individuals can make the ‘right’ choices.

In many developing countries, farming, food and seed systems are presently undergoing a process of transformation. In the course of this process, seed and variety protection laws are being introduced or revised. In order to direct the transformation process towards improved nutritional outcomes, particularly for vulnerable groups, the human right to food needs strong consideration by governments and donors. Different actors in seed systems have at the same time shared and diverging interests. For example, farmers and consumers are interested in having a range of diverse crops and varieties at their disposal, whereas private seed companies strive for increasing the market share of the relatively few crops and varieties they focus on. Hybrid varieties can increase agricultural production but may impede access to seed for vulnerable groups who cannot afford to purchase new seeds year after year. ‘Better-off’ farmers, however, may be interested in using these varieties. It is a responsibility of governments to balance such diverging interests. Policies and incentives have to be targeted and evaluated more clearly towards nutritional outcomes; various actors’ contributions and approaches may be needed to establish seed systems that are supportive to NSA. Lastly, the concept of NSA entails more than improving the various aspects of food and nutrition security. Feedback loops between farming, environmental and human health are often insufficiently addressed by agricultural and food policies. Therefore, research and institutions are needed that address such interrelated policy fields and develop adequate programmes and activities. In this regard, the recently launched SDGs and relevant human rights could provide guidance for governments, civil society and the private sector alike.