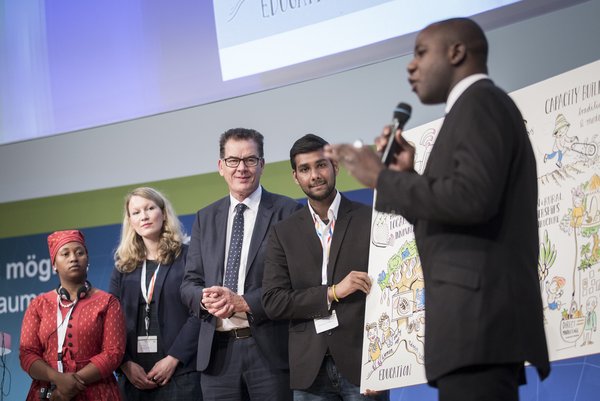 Since December 2016, Germany has presided over the G20 – the 20 most important industrialised countries and emerging economies. In the course of this meeting, concrete agreements are to be reached on promoting youth employment in the rural areas of the partner countries. Measures and initiatives addressing this were discussed at the conference “One World – No Hunger. The future of the rural world”.

How can economic prospects be created for millions of young people in rural areas. How can dynamic rural regions be developed and food security be achieved, especially in Africa? These issues were at the centre of the G20 Conference hosted by the German Federal Ministry for Economic Cooperation and Development (BMZ) in Berlin, Germany, in late April 2017.

The explosive nature of this topic is obvious. Today, 1.2 billion people are between 15 and 24 years old. By 2030, around 600 million young people will be surging onto the job market, including roughly 440 million in Africa. Often, however, jobs in rural regions are unattractive, which is why more and more youth are going to the cities. “We have to improve the links between the rural regions and the booming cities,” Peter Altmaier, Chief of Staff of the German Chancellery and Federal Minister for Special Tasks, maintained. To him, this also means seeing to it that young people can find everything enabling them to lead a culturally fulfilling life in the rural areas themselves.

The private sector is called on

The event focused on the issue of how jobs can be created for the young people. “The only people I can think of who can achieve this are in the private sector,” said BayWa AG Chief Executive Klaus Josef Lutz. This company has established a joint venture for the agricultural engineering services sector in South Africa. But according to Lutz, such collaborative schemes only work if the framework conditions in the partner countries are satisfactory – if there is political reliability, if corruption can be kept at a calculable level and, above all, if local people are well educated and trained. Here, the entrepreneur would like to see a system corresponding to Germany’s dual system of vocational training – in which young people can work and earn money but simultaneously learn and are therefore familiar with state-of-the-art technology.

Seeking a diversification of the economy

“Our educational system was developed in the colonial era in order to create clans and clubs,” maintained Mo Ibrahim, entrepreneur and founder of the Mo Ibrahim Foundation, criticising the African education landscape. The continent’s continuing reliance on commodities was a further dilemma. For example, Nigeria had reduced food production in favour of oil production. However, Mo Ibrahim states: “Mining, oil and gas do not create jobs!” The diversification of the economy was essential if young people were to have a perspective. Ibrahim denounced tax evasion, corruption and mismanagement in his home continent. However, addressing the BayWa representative, he stated: “We cannot discuss governance in governments without taking a look at good governance in the private sector.”

Benefiting from creativeness and promoting entrepreneurship

“In Africa, I would not look at job creation, but at entrepreneurship among young people”, said Muhammand Yunus, founder of the Grameen Bank in Bangladesh and Nobel Peace Laureate. All human beings were packed with unlimited creativeness – regardless of whether they had just graduated from the university or were illiterate rural women who had never left their village. Digging up this treasure required money on the table. However, those at the beginning of their career or without any securities they were able to provide could not receive money from the bank. Yunus advocated creating new financial institutions that would award venture capital to young people. He called on the private sector to promote social businesses, i.e. businesses that solve social problems in the context of their activities. Joint ventures in the field of marketing and processing, e.g. in coffee or cocoa growing, were a good opportunity to retain adding value at local level and ensuring that people were reasonably paid for their work.

Of course reference had to be made to the opportunities offered by the new technologies and the ‘digital revolution’. Here, Mo Ibrahim stresses one principle in particular: “Let us avoid white elephants”. E-commerce, e-learning, e-health programmes, e-weather forecasts for fishermen – all very nice. But useless without the corresponding infrastructure. Access to electricity continued to be one of the continent’s biggest challenges, as was stressed again and again at the conference. However, creating a power grid was unrealistic, especially in rural regions. Rather, simple adaptations of existing technologies should be considered.

As a practical example, the mobile phone entrepreneur showed the conference a small solar lamp he had brought along that had been developed by a Danish artist and was available at a price of two US dollars in Africa. Children going to school can put the “Little Sun”, which is shaped like a sunflower, on their desks to do their homework, and women can wear it like a necklace and will then be safe from hazards on the way to where they fetch water or gather firewood. The “Little Sun” is supplied with a solar charger that can be used for all sorts of devices. It is produced by a company with the help of which local jobs are created and local profits are generated through a network of young African entrepreneurs. So this is a social business along the lines of what Nobel Peace Prize Winner Yunus suggests.

Berlin Charter: Creating Opportunities with the Young Generation in the Rural World