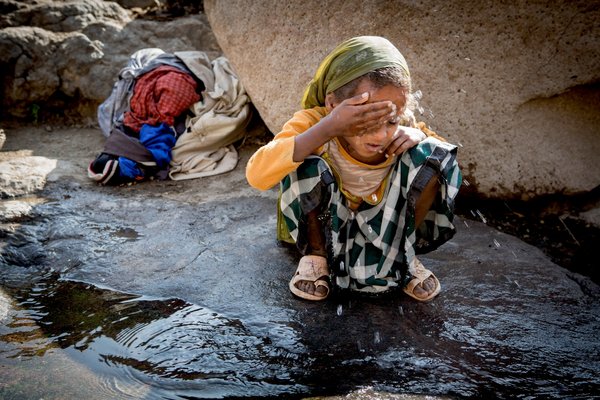 To mark World Water Day on the 22nd March, a wide range of organisations called for a fundamental shift in handling the natural resource of water.

To mark World Water Day on the 22nd March, a wide range of organisations called for a fundamental shift in handling the natural resource of water. Not without reason, for already, 40 per cent of the world’s people are affected by water scarcity, while a further 700 million people are at risk of being displaced by intense water scarcity by 2030. More than two billion people are compelled to drink unsafe water and over 4.5 billion people don’t have safely managed sanitation services. Women and girls suffer disproportionately when water and sanitation are lacking, affecting health and often restricting work and education opportunities.

Wherever water is scarce and has to be transported over long distances, people above all use this precious good for drinking and cooking purposes. Washing regularly is often neglected. However, such a lack of hygiene encourages the transmittance of diseases. One example is the highly infectious bacterial eye inflammation trachoma. World-wide 19 million people have already had their sight impaired or even gone blind through trachoma infection, reports “Christoffel-Blindenmission” (CBM). Washing one’s face regularly can be a protection against infection and hence also blindness. But particularly in the world’s poor regions, there is a lack of access to clean water – and of appropriate sanitation and knowledge of correct hygienic behaviour.

The protestant relief organisation “Brot für die Welt” drew attention to what water scarcity meant for smallholders in particular, pointing out that the countries in the northern hemisphere were contributing considerably to wasting and exhausting valuable freshwater resources through their agricultural imports. At the International Water Forum in Brasilia, Brazil, in mid-March, held under the motto “Water for all”, the organisation called for making access to water fairer internationally in order to ensure that local populations were supplied with drinking water, and hence to ensure food security.

“The ecosystems on which life itself is based – our food security, energy sustainability, public health, jobs, cities – are all at risk because of how water is managed today,” said World Bank Group President Jim Yong Kim. In April 2016, the President and the then United Nations Secretary-General Ban Ki-moon convened a High Level Panel on Water (HLPW). The core focus of the Panel was the commitment to ensure availability and sustainable management of water and sanitation for all, Sustainable Development Goal (SDG) 6, as well as to contribute to the achievement of the other SDGs that rely on the development and management of water resources. With their now published report “Making Every Drop Count: An Agenda for Water Action”, the panel members not only demonstrate the many dimensions of the water crisis but also call for policies that will allow for at least a doubling of water infrastructure investment in the next five years.