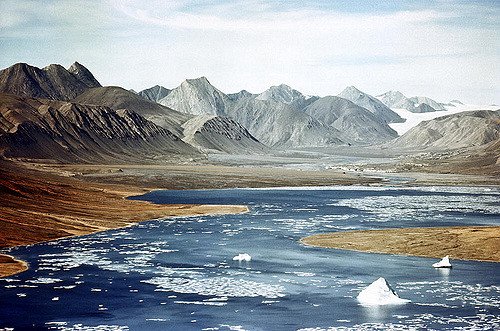 As the new US administration gets to work, fears are mounting among scientists that the country’s environmental research could be in for a severe bashing.(Canon Fjord, N.W.T. Canada)
Photo: © UN Photo/G Hunter

The USA’s new administration under Donald Trump is causing anxiety among environmental researchers, with massive cuts ahead for government-funded programmes. But in many areas, Trump’s onslaught on scientists seems almost like a carbon copy of measures that were already launched in Canada over ten years ago.

As the new US administration gets to work under Republican President Donald Trump, fears are mounting among scientists that the country’s environmental research could be in for a severe bashing. The Environmental Protection Agency (EPA), launched by President Richard Nixon in 1970 to protect human health and the environment by writing and enforcing legislation based on laws passed by US Congress, also conducts its own research and is a key source of funding for higher education and other research institution projects. Now it appears that EPA, which already saw its budget slashed by nine per cent by the Republican-dominated House of Representatives Committee on Appropriation last year, will be facing further huge cuts. Former Oklahoma Attorney General Scott Pruitt has been nominated to head the EPA. While not sharing Trump’s assessment that “global warming is a hoax invented by China”, Pruitt does believe that the role of anthropogenic factors in climate change should be reviewed.

Another source of concern is that the new administration could be making moves to disrupt information flows from government institutions to the public, especially regarding environmental issues. During the transition to the Trump administration, EPA scientists will “undergo an unspecified internal vetting process before sharing their work outside the agency”, according to an EPA official.

Not surprisingly, the Trump administration’s funding cuts are causing frustration among university researchers and students. David Bart of the University of Wisconsin-Madison works with his students in an EPA-funded project assessing the impact of groundwater withdrawal projects on fens. “We’re concerned that we won’t be able to continue work for what many of us believe is very important to solve society’s issues,” Bart says.

Students working on Alaska salmon fisheries at the University of Washington are worried that their EPA fellowships could be terminated. The university’s Professor Eric Steig, who drills ice cores in Greenland and Antarctica to reconstruct past climate and help project future impacts from greenhouse gases, speaks of an atmosphere of “total uncertainty and fear”.

Cuts could also threaten junior researchers at the University of Texas in Austin whose work on carbon capture and storage is funded by the government’s Department of Energy. This technology, which is controversial among environmentalists because it ultimately supports dependence on fossil fuels, grew under the Barack Obama’s administration, the argument in favour being its potential to remove already emitted carbon dioxide from the atmosphere. But the technology also holds a potential for the oil and gas industry. Compressed carbon dioxide can be used to enhance oil recovery, an aspect that could save research in the area.

Trump’s radical stance on climate is not really new in North America. Neither is his anathema towards environmental science. Way back in 2004, US President George W. Bush was told by his advisors that “global warming is a myth to hamper American competitiveness”. And in 2006, the Canadian government, under the Conservative Party’s Prime Minister Stephen Harper, embarked on what the Ontario Confederation of University Faculty Associations (OCUFA) refers to as “bold moves to control or prevent the free flow of scientific information across Canada, particularly when that information highlights the undesirable consequences of industrial development”.

OCUFA describes two methods to control information: the muzzling of scientists and the elimination of research programmes providing information or evidence. Harper particularly targeted the research activities of Environment Canada (EC), the Government’s Department of the Environment, but also those of the Department of Fisheries and Oceans, now called Fisheries and Oceans Canada. In 2007, the Harper government established new rules that controlled EC scientists’ communication with the media, requiring them to obtain permission from the government before speaking with reporters. EC communication with the media on climate change was reduced by 80 per cent, according to a leaked internal document.

From 2008 on, ministerial directives were issued to further regulate communication between government department scientists and the press. These directives affected research in a wide range of subject areas. For example, a Federal Department of Fisheries and Oceans scientist was prevented from reporting on findings regarding declining salmon stocks. And in 2011, EC scientists were restricted from talking to the media about findings that snowfall near Alberta’s oil sands was contaminated with petroleum-based pollutants. The Province of Alberta holds the world’s second-largest oil deposits in an expanse the size of Florida. The scientists were told to either pass on media inquiries to a government spokesperson or refer to official statements claiming that a 2010 government survey had found no toxins in the Athabasca River, which flows through the region. This survey also stated that no link had been made between oil sands contaminants and mutated and cancerous fish in the vicinity of the mines. The findings of the EC scientists suggested the opposite.

Scores of independent surveys and reports have since revealed that oil sand operations in the region have ruined fishing in the area. The incidence of cancer among First Nation inhabitants has risen markedly, and there are accounts that many locals can no longer use tap water to wash because it causes skin sores. The concentration of toxic substances in tailing ponds is so high that the Government of Alberta had to install deterrents to prevent an extinction of water fowl. In all, an area the size of France has since been devastated.

Under the Harper government, funding was discontinued for a string of environmental research projects, among them the Environmental Lakes Area (ELA), a unique scheme investigating the impact of various stresses on lakes and their catchment areas that is now run by the International Institute for Sustainable Development. In 2012, scientists took to the streets of Canada’s capital of Ottawa, decrying the “Death of evidence”.

Canada had already withdrawn from the Kyoto Protocol in December 2011, the only signatory to have done so. In 2015 however, the Liberal Party’s Justin Trudeau was elected Prime Minister, and in December that year, Canada signed the Paris Agreement on combating climate change. Trudeau took a different stance from Harper on the environment and the economy, declaring that “they go together like paddles and canoes. Unless you have both, you won’t get to where you are going, because you can’t have a strong economy without a healthy environment”. While maintaining that Canada’s resources have to get to market, Trudeau insists that this needs to be done in a responsible and sustainable way, also including science and indigenous peoples in the process. The oil sands industry, he claims, has to be phased out.