Investments are key to economic development. However, Africa has the lowest investment rates of all developing countries. In its latest Economic Development in Africa Report, UNCTAD shows what African countries have to do if Africa is not to remain a mere “continent of opportunities”. 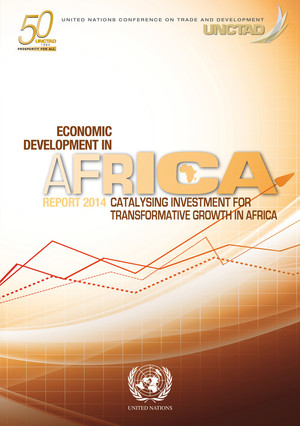 Africa is generally touted as the “continent of opportunities”. Economic development has seen progress. The growth rate of the economy increased by 1.8 per cent, to 2.6 per cent, within a decade since the 1980s and currently has an average of 5.3 per cent. Individual countries have even become leaders at 6.1 per cent. The continent is set to achieve Millennium Development Goals 2 (school education), 3 (strengthening women’s rights) and 6 (combating HIV/AIDS and other diseases). However, the number of those living in absolute poverty has increased, too. Over the last few years, growing industrialisation has set in, and the countries of Africa have the lowest investment rates of all developing countries. Even though services and the development of natural resources are booming, these branches of the economy are not enough to offer the annual 15 million new entrants to the labour market job prospects. Low investment rates are undermining national development plans and goals.

In its report ‘Economic Development in Africa 2014’, UNCTAD, the United Nations Conference on Trade and Development, highlights the weaknesses in the continent’s economic environment. The report shows why investments often come to nothing and how they could be made more effective to trigger general growth between the Sahel and the Cape of Good Hope, and the Atlantic and the Indian Ocean.

There are a wide range of reasons for low investment rates. Since the 1980s, the share of public investments has declined, and between 1990/99 and 2000/10, the effectiveness of capital investment saw a greater drop than in Asia and South America. The brain drain is also contributing to low investment rates, even though skilled workers are now sending much more money back to their own countries. Private cash inflow rose from nine to 62 billion US dollars from 1990 to 2012, accounting for 17 per cent of capital flow in developing countries world-wide.

However, people have only poor access to loan capital. Moreover, the cost of capital is very high. The Democratic Republic of Congo (DRC) heads the list, with banks demanding 44 per cent interest. At just 17.7 per cent, the saving rate has only reached a low level, and last but not least, economic uncertainty and political instability are preventing much-needed investments.

A new view of investments

UNCTAD maintains that policy changes are required to improve the investment climate. In the 1980s, public investments were still suffering from a poor image because they were encouraging bureaucracy. Today, however, investments have to be regarded as costs that have been avoided. Without public investments, there will be no strong private-sector investment. Businesses are not competitive without the government simultaneously developing infrastructure. If companies have to see to this on their own, their production will become more expensive.

However, in order to promote public investments again, money has to be financed via a broad-based tax system. Often enough, countries lack credit institutions of their own. Most of the institutions they have to rely on are overseas branches of banks operating world-wide that usually grant loans to international corporations. The local sector of small and medium-sized entrepreneurs is neglected in this context. However, it is this sector in particular that maintains the lion’s share of production and employment. In 2012, with the support of Denmark and Spain, the African Development Bank (AfDB) set up a special fund for small entrepreneurs.

Agriculture is not the sector of the economy offering the most worthwhile opportunities for investment. The figures in the UNCTAD report speak for themselves. Skilled crafts and trades, services and commerce promise the greatest degree of capital effectiveness. However, the example of Rwanda demonstrates that agriculture must not be neglected. Rwanda is one of the ten countries in Africa with the highest growth rates. Between 2000 and 2010, its economy was growing by an average 8.1 per cent a year. In addition to balanced incentives for public and private investment as well as support for small-scale enterprises, the country can also score points with its efficient agriculture. Its agricultural sector is highly productive, processes natural resources with a view to market demand and has created networks with other sectors of the economy.