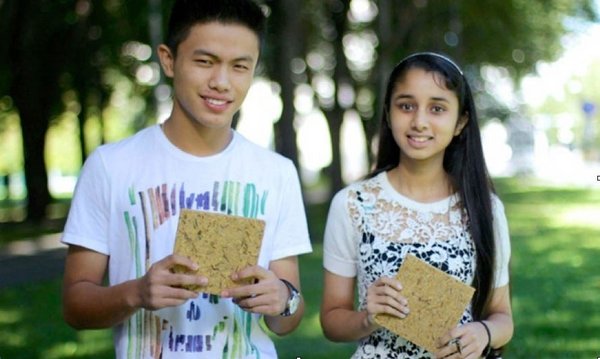 Bisman Deu and a friend holding ‘green wood’, made from rice waste. It can serve as a building material for low-cost housing.
Photo: © Bisman Deu

An Indian student with a farming background finds a green alternative to burning tons of rice husks and straw by using the waste as housebuilding material.

More than half of the world’s people eat rice as a staple food, and every five tons rice harvested produce one ton of waste husk. When the 16-year-old student Bisman Deu saw her family burning mounds of rice waste at their farm in southern India, she was convinced the material could be put to better use. “The harvesting months are the worst and the black smoke gets quite harmful, causing people to have problems breathing, as well as polluting the environment,” Deu said in an interview with the UK newspaper The Guardian.

The young student came up with the idea of recycling the unwanted rice husks and straw into an alternative building material. So far the cereal residue has little commercial value for farmers. Deu hopes to change that. “I want to provide cheap and affordable housing material to people, because many live in homes made of mud, which can’t always withstand the weather. This would create a new source of income for farmers,” she said.

After asking farmers how they would like to use the recycled product, Deu took to her mother’s kitchen to create a prototype, with support from the Social Innovation Relay initiative. Mixing the waste with a resin and pressing the mixture into particleboards, she came up with what she calls “green wood”. She says the product is fungi- and mould-proof, making it a viable option for building houses. Deu also plans to use the material to build low-cost school furniture. “It could be a local, sustainable solution to some of the problems we see here,” she told The Guardian.

Deu is still perfecting her prototype but has received interest from Indian businesses. She has made a few designs and is still improving them.
Deu’s innovation was featured in Unicef’s 2015 State of the World’s Children report alongside offerings by other young inventors, including four Nigerian students who created a urine-powered generator and a Colombian student who invented a vibrating device to help people with impaired hearing negotiate traffic.
Deu, who plans to study economics at university, said to The Guardian that she was inspired after having met other young innovators. “It was the best experience, and I discovered that there are many young people like me trying to find solutions to our problems. It showed that we, the youth, can think outside of the box.”