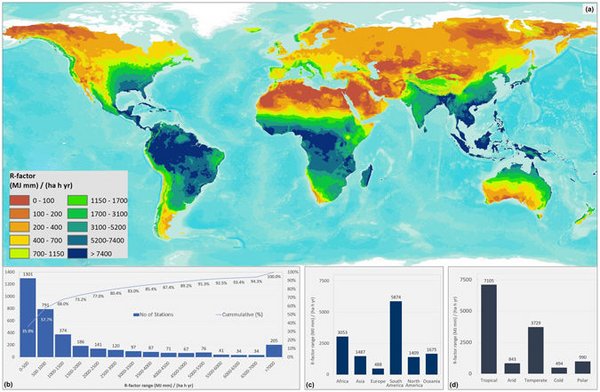 Tropics most prone to soil erosion

While water erosion is identified as the most serious cause of soil degradation globally, global patterns of rainfall erosivity remain poorly quantified, and estimates have large uncertainties. This hampers the implementation of effective soil degradation mitigation and restoration strategies. Quantifying rainfall erosivity is challenging as it requires high temporal resolution (<30 min) and high-fidelity rainfall recordings.

A team of international scientists at the Joint Research Centre of the EU Commission, in Ispra, Italy, recently presented the results of an extensive global data collection effort whereby they estimated rainfall erosivity for 3,625 stations covering 63 countries. This first ever Global Rainfall Erosivity Database was used to develop a global erosivity map.
The study was published in Scientific Reports, in July 2017.

For experts, model predictions of global erosivity are very important because they help assess risks as well as plan and implement effective soil mitigation and restoration strategies.

According to the study, erosion by rainfall remains poorly quantified despite its significance. This is because it is a complex event influenced by various factors including rainfall intensity, duration, amount and frequency — factors which are not captured in current erosivity estimates.

To model annual rainfall erosivity for different regions, the international team relied on rainfall data gathered from 3,625 stations scattered across 63 countries. Their analysis shows that annual mean rainfall erosivities for countries in the tropics are more than double the global average of about 2,190 megajoule millimetres per hectare per hour per year.

South America (particularly Brazil, Columbia and Peru), South-Eastern Asia (Cambodia, Indonesia, Malaysia, the Philippines and Bangladesh), the Caribbean, and Western and Central Africa have annual mean rainfall erosivities that are greater than 5,000 megajoule millimetres per hectare per hour per year.

“The tropical forests and the monsoon zones, covering the Amazonia part of Brazil, Central Africa and Southeast Asia, have intense rainfall but also excess monthly precipitation that is greater than 1,000 millimetres for two consecutive months,” says Panos Panagos, study leader and scientific officer at the Joint Research Centre, European Commission. “The Mediterranean zone, a typical temperate climate zone, has seasonal rainfalls which are less intense than the ones in the tropical zones.”

With extreme rainfall events becoming more common as a result of climate change, soil erosion is expected to increase — leading to further impacts on agricultural production and a greater contribution to disaster-related risks such as flooding and landslides. Panagos says the emerging risks can be managed through good agricultural practices like reduced tillage, cover crops, grass margins and contour farming.