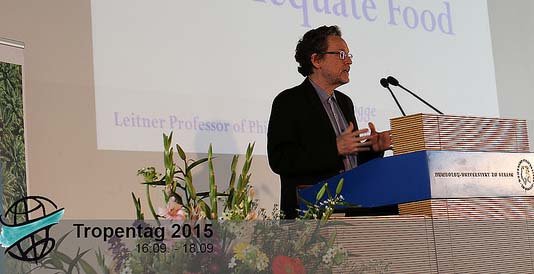 “Tropentag” in between MDGs and SDGs

This year’s Conference on Tropical and Subtropical Agricultural and Natural Resource Management (Tropentag), held in Berlin, Germany, was attended by more than 1,000 participants. The event, focusing on the search for a global, stable system to ensure food for the world’s population, started off with harsh criticism of the global community’s statistics.

Shortly before the United Nations tables the Sustainable Development Goals (SDGs), which are to replace the Millennium Development Goals (MDGs) for signing, around 1,300 scientists from more than 80 countries got together at Humboldt University Berlin in order to address the issue of future world nutrition from a scientific angle. More than 730 participants came from Europe, while the 230 guests from Africa constituted the second largest group at the meeting. For three days, agricultural and environmental scientists, biologists, sociologists and economists contributed experience gathered in their research on finding a stable system for food security for ten billion people.

Shenggen Fan, Secretary-General of the International Food Policy Institute (IFPRI), pointed to the increasing number of crises that the global community was witnessing, ranging from natural disasters through a growing scarcity of natural resources to political instability causing millions of people to flee. Each year, malnutrition is costing the world around five per cent of the gross national product, which corresponds to USD 3.5 billion. Reductions in labour performance owing to deficits in the provision of micronutrients reduce the gross national product by two to three per cent each year, corresponding to the staggering sum of USD 1.2 to 2.1 trillion a year. At least a glance at the SDGs can give rise to some hope. Twelve of the 17 goals set the course for a global and secure food system. IFPRI itself has initiated the new “Compact 2025” programme, which is to be officially launched on the 18th November. Research results are to trigger innovations that will then provide the foundations for partnerships to end hunger by 2025.

The key role of women

Women play an important role in this context. According to Brave Ndisale of the United Nations Food and Agriculture Organization (FAO), 43 per cent of farming worldwide is done by women. However, the lack of access to resources and technology and of land ownership is making their work inefficient. Not only do women provide food at the household level. As soon as they actually get money, the amount of food in a household starts to rise, the children go to school, and there are real prospects for the future, Ndisale maintains. In order to strengthen the role of women, countries need strong social systems with health insurances as well as insurance against failed harvests, subsidies for farm inputs, money transfer and employment programmes. Here, the factor of land represents a bottleneck, although Ndisale stresses that the issue of land management is more problematic than that of land itself. To address this area, the FAO has issued the “Voluntary Guidelines on responsible governance of tenure of land, fisheries and forests”. While neither the tasks to be dealt with nor the solutions presented are new, the problems remain unsolved.

Here, the danger arises of numbers being fiddled with to come up with good results. Philosopher Thomas Pogge of Yale University in the USA says that the FAO is no exception in this respect. The Millennium Declaration of 2000 announced a halving of the number of people suffering from hunger by 2015. This would have required an annual reduction rate of 3.39 per cent. But the interim balance of 2010 showed an increase of 17 per cent in the number of people suffering from hunger. The Millennium Development Goals formulated shortly afterwards were more conservative and referred to the percentage of people suffering hunger of the world population. In addition, they set the reference year back to 1990, which meant that they were able to include China’s successful efforts in their calculations. The global community ultimately spoke of halving the share of people going hungry in the developing countries, so that, owing to rapid population growth there, the rates then led to the desired results on a purely arithmetical basis. Pogge suggests that in future, these important figures be calculated by independent organisations to provide a basis for political programmes.

In addition, the FAO introduced a new measuring method in 2009 that Pogge is also critical of. According to the FAO definition, hunger is a concept based solely on the calorie deficit. Micronutrient deficits, which can also be detrimental to health, are not referred to in this approach. Moreover, the FAO sets out from the minimum requirements of a human being with a sedentary lifestyle, whereas in the developing countries, longer distances having to be covered to get water and fuel wood as well as physical labour mean that people have a significantly higher calorific requirement. And finally, the FAO only defines hunger as such if it lasts for a period of one year, although short-term scarcity can also strongly influence an individual’s health status. Since the indicators for the SDGs yet have to be determined, Pogge still has hopes that more realistic ones will then be used.