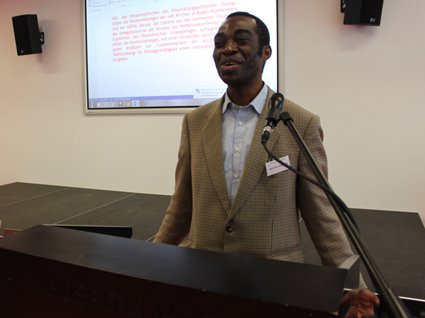 Boniface Mabanza of the Ecumenical Service on Southern Africa warned of the “catastrophic impacts” that the Economic Partnership Agreements were having.
Photo: Ralf Häußler

Trade and business must serve the people

Free trade and the European Union’s Economic Partnership Agreements were criticised at the 5th Ecumenical Strategy Congress of the Churches in Baden-Württemberg in southern Germany. The participants addressed the issue of whether and how trade really could promote development and called for binding regulations on compliance with human rights in the economic sector.

“The economy must not be an end in itself. It has to serve life,” said Boniface Mabanza of the Ecumenical Service on Southern Africa (KASA) at the 5th Ecumenical Strategy Congress of the Churches in Stuttgart, Germany, in late January. His presentation centred on a critique of the current forms of trade. Free trade, he stressed, had never worked but was merely destructive. This had also been revealed during the past 30 years of structural adaptation programmes and 20 years of the World Trade Organization (WTO). “These programmes fall far short of what is needed, and they ignore the reality of the local markets. Many producers in Africa are having difficulty producing what people consume,” Mobanza maintained. Priority should be given to agriculture and protecting local producers’ access to the local markets, he said, adding that “trade must not be allowed to determine everything”.

Mabanza also sharply criticised the EU’s Economic Partnership Agreements(EPAs) on free trade with African, Caribbean and Pacific countries. The assumption that free trade was promoting economic growth and development only held in the case of trade partners that were more or less on a par. In this context, he cited a study by the EU Directorate-General Trade which revealed that the EPAs with West Africa were only bringing the region a growth level of 0.5 per cent by 2035 and emphasised: “Premature and unlimited freedom between structurally unequal partners aggravates inequality and lowers the development prospects for the weaker side, ultimately to the extent of destroying its livelihoods.” The conclusion he therefore drew was that the impacts of the EPAs were “catastrophic”.

In reality, the EU’s Economic Partnership Agreements only served the purpose of facilitating access to markets and cheap commodities for European industry. What the world needed was not free trade but strongly controlled and regulated trade. Mabanza called on politicians to take the reasons that countries have to refuse entering Economic Partnership Agreements with the EU seriously.

Business has to respect human rights, too

“It is important that people working in our world-wide value chains in producing goods, such as in resource mining, earn a living wage,” said Eva-Maria Reinwald of the Südwind Institut, adding that they needed healthy working conditions, reasonable accommodation and fixed working hours and demanding that their human rights were respected.

As yet no international law agreement with binding effect exists that prescribes respect for human rights in the area of trade and commerce. Although the UN has formulated its Guiding Principles for Business and Human Rights, they are not binding, which means that those concerned cannot claim their rights. And violations of human rights are by no means exceptional. Reinwald referred to a 2015 study by the University of Maastricht that evaluated a Human Rights Watch website on which a total of 1,800 violations of human rights had been registered between 2005 and 2014. Eighty-seven of these accusations related to German companies. “Thus Germany ranked fifth among the countries violating human rights,” she explained.

A national plan of action for German companies

In December 2016, the German Federal Government adopted the National Action Plan on Business and Human Rights which governs how German companies also have to observe due diligence in protecting human rights abroad and what measures they have to take to protect human rights. The aim is that by 2020, 50 per cent of all companies with more than 500 employees will have to have introduced corresponding measures. However, civil society organisations criticise that nearly everything contained in the Action Plan is based on voluntariness. “Binding regulations are not even referred to for government companies,” Reinwald told the Congress.

However, things are moving at UN level. In June 2014, the UN Council on Human Rights adopted a resolution submitted by Ecuador and South Africa calling for the setting up of a working group with the mandate of drawing up an internationally binding agreement regulating the activities of transnational corporations and other companies with regard to human rights in accordance with international law. The first elements of such an agreement are to be presented in autumn 2017.