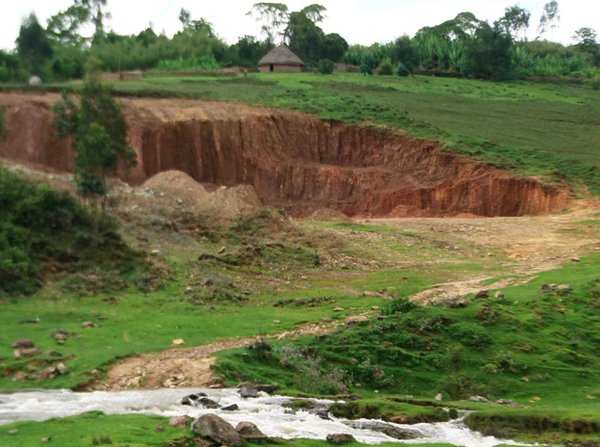 Ethiopia is among the countries which are highly affected by soil degradation.
Photo: © Oliver K. Kirui/ZEF

Global soil degradation is assuming dramatic proportions. If action to stem this trend is not taken very soon, the future resulting costs will be a multiple higher than those of countermeasures required right now, the Center for Development Research and the International Food Policy Research Institute warn.

Around 30 per cent of the Earth’s surface, representing the habitat of about 3.2 billion people, is affected by significant soil degradation. Over the last three years, across the world, 33 per cent of pastureland degraded, 25 per cent of arable land and 23 per cent of forest areas. World-wide, land degradation causes an annual loss of about 300 billion US dollars – 40-50 US dollars per capita and year and about 0.5 per cent of the 2007 global gross domestic product. Despite these costs and despite the crucial role that land plays in human welfare and development, investments in sustainable land management are low. This above all applies to developing countries, where people suffer most from the impact. As a study by the Center for Development Research (ZEF) at the University of Bonn, Germany, and the International Food Policy Research Institute presented in Berlin/Germany in mid-February shows, it is high time to act.

The study entitled “Economics of land degradation and improvement – a global assessment for sustainable development” reveals the cost of land degradation, analyses the drivers, and identifies strategies for sustainable land management. The Total Economic Value (TEV) approach, which assigns values to all ecosystem services and biodiversity, was applied in the analysis. It focuses on two kinds of land degradation: long-term loss of value of land ecosystem services due to land use and cover change (LUCC) and the use of land-degrading management practices on cropland and grazing lands that are not undergoing LUCC.

While land degradation-induced processes, such as soil fertility decline and biodiversity loss, act on local scales, they have regional and global implications. “Only about 46 per cent of the cost is borne by immediate land users, whereas the remaining 54 per cent is borne by the population at large,” said ZEF Director Joachim von Braun. Conversely, land users who invest in sustainable land management receive less than half of the benefits; the lion’s share goes to beneficiaries off the farm. And taking action pays its way. “Every dollar invested in restoration of degraded lands generates about five dollars in return,” von Braun maintained, quoting simulation results. The studies demonstrated that sustainable land management was most feasible where highly effective governments, strong local institutions, market access and secure land tenure were in place. Moreover, policies were called for that would provide incentives for land investments and/or the establishment of ecosystem services.

However, current policies were often following a different course. Matthias Meißner, an agricultural policy expert with World Wide Fund for Nature (WWF), Germany, pointed to fertiliser subsidies, which are provided in a number of countries, including in sub-Saharan Africa, a region which accounts for about a quarter and hence the largest share of the global cost of land degradation. “Subsidies may lead to higher yields in the short term. But in the long term, they have a negative impact on soil fertility,” Meißner explained, and he called on development co-operation to focus its activities on sustainable soil fertility.

Partly, this was already the case at his ministry, said BMZ Deputy Director-General Stefan Schmitz. In the context of the “One World – No Hunger” initiative, corresponding projects had been launched in Ethiopia, Kenya and India among others; 160,000 hectares of soil was to be rehabilitated in the course of the programme, also via local partners being advised on soil-water cycles, afforestation or the employment of natural fertiliser to redevelop soil fertility, Schmitz explained. “It does not make any sense to fight hunger through producing more food, if the basis for that production, the soil, gets lost at the same time”, Schmitz maintained.

Marita Wiggerthale, an agricultural expert with the relief organisation Oxfam, demanded that the reasons for soil degradation always be precisely analysed at local level. Here, a clear distinction could be made between industrial and smallholder agriculture. For example, a lack of advice on sustainable soil management was the main reason for many smallholders sticking to non-sustainable cultivating methods. Corresponding consulting and securing of their land titles had to be at the top of the agenda.

The question remains whether soil degradation is a matter of farm size and whether a global guiding concept can be derived from this for agriculture. “The 450 million smallholders are not per se the cause of soil degradation,” said Joachim von Braun, countering an often referred to assumption. He and his colleagues had been unable to find any significant link between the size of a farm and the extent of or trend in soil degradation in the course of the survey. Former executive director of the United Nations Environment Programme (UNEP) Klaus Töpfer stressed that the high level of capital intensity in agriculture is viewed with scepticism nowadays, and that enlarging farms through land consolidation, combined with a loss of biodiversity, is being questioned. “We can see that solutions are often getting smaller while networking is growing, which can also lead to very high levels of productivity,” Töpfer maintained.

The book is available for download (free of charge)