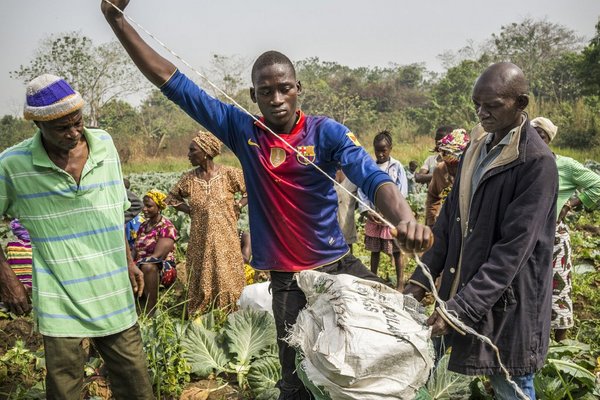 The role of agriculture in preventing conflict and enabling recovery was highlighted by FAO director at the TICAD conference in Kenya. A new initiative, the Initiative for Food and Nutrition Security in Africa (IFNA), was launched at the same conference.

TICAD takes place every five years and is co-organised by the Government of Japan, the United Nations Office of the Special Advisor on Africa (UN-OSAA), the United Nations Development Programme (UNDP), the African Union Commission (AUC) and the World Bank.

The conference –which brings together policy makers, UN agencies and financial institutions, among others -- aims to promote high-level policy dialogue between African leaders and their partners and mobilise support for African-owned development initiatives.

Food security and agriculture have an essential role to play in preventing conflicts and crises on the African continent, blunting their impacts and acting as engines for post-crisis recovery, stated FAO Director-General José Graziano da Silva at the conference.

"By supporting agriculture and rural development, we help create jobs, provide income and boost youth employment. This can help prevent distress migration and radicalisation, as well as mitigate disputes over depleted resources," he added.

The link between conflict prevention and development is of particular importance in the region, which is host to nearly 60 per cent of active UN Peacekeeping Missions. And whilst armed conflicts across Africa as a whole have decreased in recent years, this trend has been uneven across the continent.

A new nutrition initiative was launched at TICAD: the Initiative for Food and Nutrition Security in Africa (IFNA). It aims to accelerate international efforts to alleviate hunger and malnutrition on the African continent.

Over the last 25 years, the proportion of Africans facing hunger decreased from 28 to 20 per cent, despite a growing population - an achievement that can be largely attributed to a high level of commitment by the continent's leaders to tackling the issue.

The new initiative aims to build on these achievements with inclusive, people-cantered projects - projects that empower women and bring together the agriculture, health, education and private sectors to help build more resilient communities across Africa. This will be done with the collaboration of regional organisations including the New Partnership for Africa Development (NEPAD).

The initiative is also relevant in light of ongoing efforts to implement the recommendations coming out of the Second International Conference on Nutrition (ICN2) across Africa (Rome Declaration on Nutrition and Framework for Action), which will be boosted by the new nutrition initiative IFNA. In this regard, FAO joins forces with the World Health Organization (WHO), the United Nations Children's Rights & Emergency Relief Organization (UNICEF), the International Fund for Agricultural Development (IFAD) and other partners through the (ICN2) Steering Committee on Nutrition (SCN) for future action.