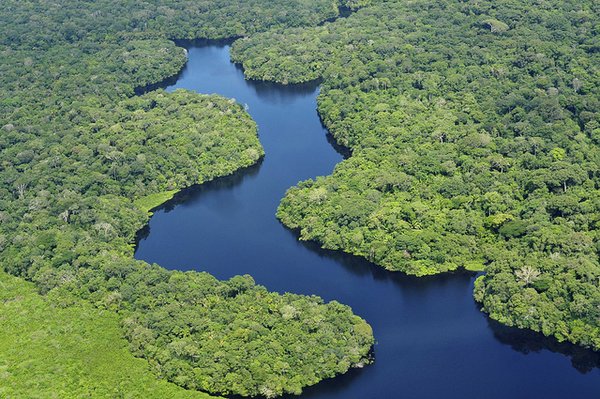 Aerial view of the Amazon Rainforest, near Manaus, the capital of the Brazilian state of Amazonas.
Photo: Neil Palmer (CIAT)

The success of Brazil’s Soy Moratorium

In 2006, following a report from Greenpeace and under pressure from consumers, large companies like McDonald's and Wal-Mart decided to stop using soy grown on cleared forestland in the Brazilian Amazon. This put pressure on commodity traders, such as Cargill, who in turn agreed to no longer purchase soy from farmers who cleared rain forest to expand soy fields.

The private sector agreement, a type of supply chain governance, is called the Soy Moratorium and it was intended to address the deforestation caused by soy production in the Amazon. In a new study to evaluate the agreement, published in January 2015 in Science, scientists show that the moratorium helped to drastically reduce the amount of deforestation linked to soy production in the region and was much better at curbing it than governmental policy alone.

Between 2001 and 2006, prior to the moratorium, soybean fields in the Brazilian Amazon expanded by 1 million hectares, or nearly 4,000 square miles, contributing to record deforestation rates. By 2014, after eight years of the moratorium, almost no additional forest was cleared to grow new soy, even though the soy production area had expanded another 1.3 million hectares. Farmers were planting on already cleared land.

The study found that government enforcement efforts capture only between 15 and 50 percent of illegal, large-scale deforestation. Even then, many factors make execution of fines and other penalties difficult. Meanwhile, the study shows that a small number of soy traders, like Cargill, ADM and Bunge, have a lot of power and control to influence land management decisions on the ground.

The study also found there is enough already-cleared, suitable land in the Amazon to allow the soy production area to expand six fold.