The State of the Global Partnership for Development Report 2014 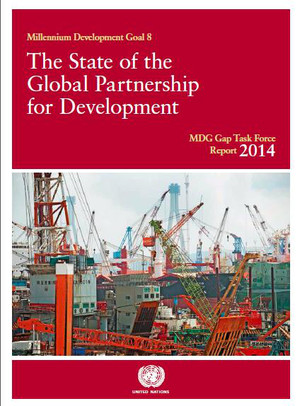 Targets for the Millennium Development Goals related to the global partnership to improve people’s lives and end poverty show mixed results on providing the poorest developing countries with greater access to aid, trade, debt relief, essential medicines and technologies, according to a new UN report launched at the United Nations Headquarters last September.

According to the State of the Global Partnership for Development –  MDG Gap task force report 2014, notable progress has been made towards achieving the goals set under MDG 8. Goal 8 was created as a call to developed countries to extend specific types of support to developing countries to help them achieve the other seven MDGs, which include targets on reducing poverty, hunger and child and maternal mortality, and on increasing access to education and environmental sustainability.

As positive examples, the report highlights an increase in official development assistance, a breakthrough in the 2013 World Trade Organization negotiations in Bali, an extension of duty-free and quota-free access to developed-country markets for least developed countries, and greater availability and falling costs of telecommunications in developing countries.

However, the report also emphasised the many challenges that remain. For instance, while official development assistance hit a record high, aid flows to some regions declined and total flows still fell short of commitments made by UN Member States, agricultural subsidies in Organisation for Economic Co-operation and Development (OECD) countries remain entrenched, small States continue to face longstanding debt sustainability challenges, and essential medicines continue to be unaffordable and insufficiently available in many countries.

Since 2007, the MDG Gap Task Force has examined progress and shortfalls in implementing the targets of Goal 8, to “develop a global partnership for development”. Each report focuses on the gap between commitments made and co-operation delivered, with the ultimate goal of helping the international community bridge the difference.

With the MDGs concluding in 2015, this report underscores the need for a renewed political commitment to development co-operation and to a coherent set of substantive policies for global development.