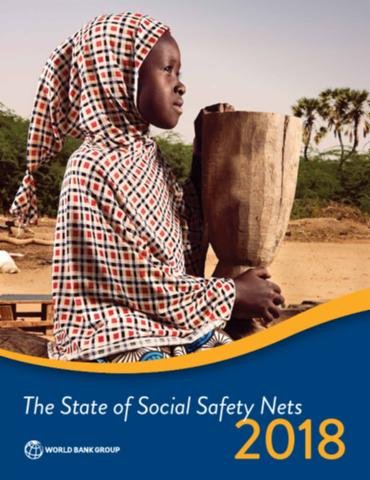 The State of Social Safety Nets 2018

The World Bank report The State of Social Safety Nets 2018 takes a look at social safety net programmes that exist globally. Although adoption of such programmes has increased in recent years, coverage remains inadequate.

The report The State of Social Safety Nets 2018 was published by the World Bank in April 2018. It is the third in a series of studies that monitor and report on the growth and coverage of social safety nets in the developing world.

According to this report, 36 per cent of the very poor who received safety net benefits escaped extreme poverty. The impact of social safety nets on poverty is measured based on available household data from 79 countries by comparing the welfare of the safety net beneficiaries to what it would have been had they not received such support.

Data from the report shows that safety nets – which include cash, in-kind transfers, social pensions, public works, and school feeding programmes targeted to poor and vulnerable households – also lower inequality, and reduce the poverty gap by about 45 per cent, even if they do not emerge from poverty. These positive effects of safety net transfers hold true for low and middle-income countries alike, according to the authors.

Despite the increased adoption of safety net programmes by countries in recent years, global coverage of poor and vulnerable people remains inadequate. About 2.5 billion people world-wide are covered by a social safety net 650 million of whom are in the poorest 20 per cent. However, only one out of five persons living in a low-income country benefits from a safety net. Furthermore, countries at high risk of natural disasters often have lower safety net coverage.

Spending as a percentage of GDP by region is as follows: Europe and Central Asia, 2.2 per cent; Sub-Saharan Africa, 1.5 per cent; Latin America and the Caribbean, 1.5 per cent; East Asia and Pacific, 1.1 per cent; Middle East and North Africa,1 per cent; South Asia, 0.9 per cent.

The report also looks at two thematic areas pertinent to managing risk and vulnerability, namely social assistance and aging, where it focuses on the role of old-age social pensions, and adaptive social protection, where it discusses shocks and how social safety net programmes can be adapted to better respond to them.