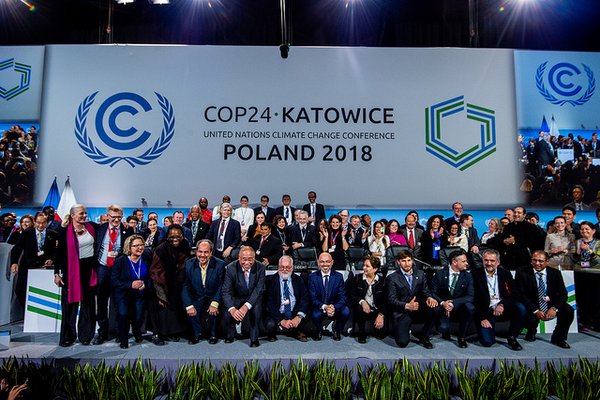 26th plenary meeting of the CMA (countries who have signed and ratified the Paris Agreement), Katowice, Poland, 15 December 2018.
Photo: ©cop24.gov.pl

The Paris Agreement gets a rule book

At COP24, the 197 parties of the UN Framework Convention on Climate Change (UNFCCC) gathered to agree on how they will achieve the Paris commitments. They adopted a “rule book” for the Paris Agreement, the ‘Katowice Climate Package’. Nevertheless, some questions still remain unsolved.

In the first weeks of December 2018, the 197 Parties to the UN Framework Convention on Climate Change (UNFCCC) debated at the COP24 meeting in Katowice, Poland on concrete action to implement the Paris Agreement. The very difficult negotiations meant that it was only possible to terminate them on 15 December – one day after the climate conference officially ended.

Three years ago, the countries agreed in Paris to take action to keep global temperature rises under 2°C above pre-industrial levels, and as close as possible to 1.5°C.  The Parties to the climate conference then set the 2018 COP24 meeting in Poland as the deadline for the adoption of a “rule book” to translate the Paris Agreement into action.

The difficulties encountered during the negotiations were the different realties of the parties. Some countries feel the need for global action more acutely than others: the small island nations, for example, and areas of extreme weather activity such as the Sahel or the Polar regions.

The various levels of economic and social development of countries had to be taken in account, especially when it comes to the financing of climate action. The actions and obligations of the 197 parties needed to be differentiated accordingly, known as “common but differentiated responsibilities”.

Following tough negotiations, the Governments have now adopted a set of guidelines for implementing the Paris Climate Change Agreement. The agreed ‘Katowice Climate Package’ is designed to operationalise the climate change regime contained in the Paris Agreement. Under the auspices of the United Nations Climate Change Secretariat, it aims to promote international cooperation and encourage greater ambition.

The Katowice package includes guidelines that will operationalise the transparency framework. It sets out how countries will provide information about their Nationally Determined Contributions (NDCs) that describe their domestic climate actions. This information includes mitigation and adaptation measures as well as details of financial support for climate action in developing countries.

• How to assess progress on the development and transfer of technology

The agreed guidelines mean that countries can now establish the national systems needed to implement the Paris Agreement as of 2020. The same will be done at the international level, according to UNFCCC.

But there are still some points that have to be clarified. The main issues still to be resolved concern the use of cooperative approaches, as well as the sustainable development mechanism, as contained in the Paris Agreement’s article 6. These would allow countries to meet a part of their domestic mitigation goals through the use of so-called “market mechanisms”.

Market mechanisms provide flexible instruments for reducing the costs of cutting emissions, such as carbon markets. The Paris Agreement recognises the need for global rules to safeguard the integrity of all countries’ efforts. These global rules are important to ensure that each tonne of emissions released into the atmosphere is accounted for and that progress towards the emission-limitation goals of the Paris Agreement can be accurately measured.

Consequently, of this, countries have agreed to finalise the details for market mechanisms in the coming year in view of adopting them at the next UN Climate Change Conference (COP25).

The ‘Talanoa Call for Action’

The closing session of the Talanoa Dialogue concluded 21 ministerial roundtables that brought together nearly 100 ministers and over 40 non-Party stakeholders. During the session, the Presidencies of this and last years’ UN Climate Change Conferences (COP24 and COP23) issued the ‘Talanoa Call for Action’ which calls for the mobilisation of societal actors to step up their efforts to meeting the global climate goals agreed in Paris in 2015.

Various financial announcements have been made since the beginning of COP 24, including by the World Bank, multilateral development banks, and the private sector. However, UN General Secretary Guterres urged developed nations to “scale up their contributions to jointly mobilise USD 100 billion annually by 2020”, as laid out three years ago in Paris.

The World Bank announced a major new set of climate targets for 2021-2025, doubling its current 5-year investments to around USD 200 billion in support for countries to take ambitious climate action. The new plan boosts support for adaptation and resilience, recognising how mounting climate change impacts on lives and livelihoods, especially in the world’s poorest countries.