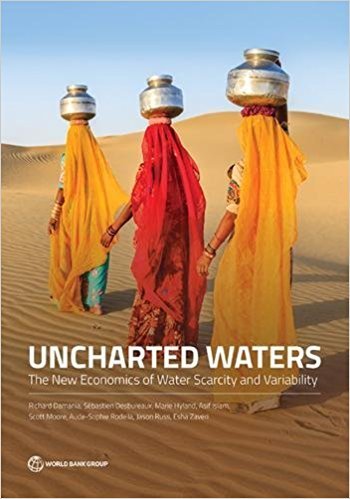 The new economics of water scarcity and variability

This report highlights the impacts of changing climate and erratic rainfalls on farms, firms and families. It offers proposals for how to tackle these challenges, calling for new policies, innovation and collaborations.

The report Uncharted Waters: The New Economics of Water Scarcity and Variability was published by the World Bank in October 2017.

It presents new evidence on how increasingly erratic rainfall impacts farms, firms and families.  It also shows that although floods and storm surges pose major threats, droughts are “misery in slow motion,” with impacts deeper and longer lasting than previously believed.

The report found that impacts caused by drought can cascade into unexpected areas. The impacts of erratic rainfall ripple through farms, firms and families, sometimes for generations. Many of the regions most affected by drought overlap with areas that are already facing large food deficits and are classified as fragile, heightening the urgency of finding solutions.

The authors recommend constructing new water storage and management infrastructure, paired with polices that control the demand for water.  Utilities responsible for water distribution in cities also need to be properly regulated to incentivize better performance and investment in network expansion, while also ensuring a fair market return.  The report also noted that when flood and droughts turn into economic shocks, safety nets must be put in place to ensure poor families can weather the storm.

Impact of drought on farms, firms and families

On farms, repeated years of below-average rainfall not only destroy crop yield -they force farmers to expand into nearby forests.  Whereas forests act as a climate stabilizer and help regulate water supplies, deforestation decreases water supply and exacerbates climate change.

For firms, the report calculates the economic costs of droughts as four times greater than those of floods.  A single water outage in an urban firm can reduce its revenue by more than 8 per cent. And if that firm is in the informal sector, as many are in the developing world, sales decline by 35 per cent, ruining livelihoods and stagnating urban economic growth.

For families, the effects of drought can span generations. The report finds that in rural Africa, women born during extreme droughts bear the marks throughout their lives, growing up mentally and physically stunted, undernourished and unwell because of crop losses.  Data shows that women born during droughts also have less education, fewer earnings, bear more children and are more likely to suffer from domestic violence. Their suffering is often passed on to the next generation, with their children more likely to be stunted and less healthy, perpetuating a vicious cycle of poverty.