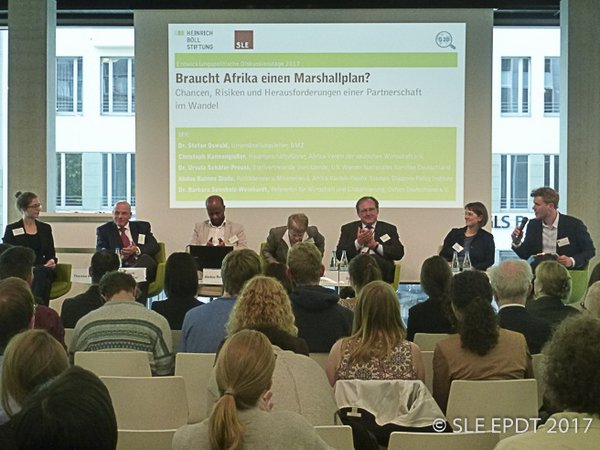 The debate on the sense and purpose of a 'Marshall Plan with Africa' has been in full swing.
Photo: ©SLE EPDT 2017

The Marshall Plan with Africa – well on track?

In January, Germany’s development minister Gerd Müller presented the outline of a ‘Marshall Plan with Africa’ as part of Germany’s G20 presidency in 2017. Development experts and civil society representatives discussed just how effective such a plan can be and what it ought to look like in Berlin/Germany in mid-May.

“Africa und Europa – a New Partnership for Development, Peace and the Future”. Under this title, Germany’s development ministry put forward its “Cornerstones for a Marshall Plan with Africa” for discussion in public in mid-January 2017. Since then, the debate on the sense and purpose of such a Marshall Plan has been in full swing. Both critical aspects and opportunities and proposals for improvements were discussed at the “Entwicklungspolitische Diskussionstage”, organised by the Centre for Rural Development (SLE), Humboldt-Universität zu Berlin, in co-operation with the Heinrich Böll Foundation in Berlin in mid-May.

Ursula Schäfer-Preuss, Deputy-Chair of UN Women Germany, criticises the omission of a gender-specific vision in the plan. Women were the drivers of achieving Agenda 2030 and the Sustainable Development Goals. Schäfer-Preuss referred to the statistics compiled by the UN Food and Agriculture Organization (FAO) according to which, if women in agriculture had the same opportunities as men, yields could be increased by 20 to 30 per cent and economic performance could be enhanced by 2.5 to 4 per cent, while the number of people suffering hunger could be reduced by 12 to 17 per cent. In order to ensure that marginalised groups could also be integrated in the process, true grassroots efforts were required so that things could be changed bottom up. “We know that this is tedious, but suitable instruments that have proven to be effective have long been available,” said Schäfer-Preuss, who would like to see a greater emphasis on the notion of partnership.

“Ever since the African countries gained independence, talks have always taken place with the same actors,” criticised Abdou Rahime Diallo of Diaspora Policy Institute. During the development of the Marshall Plan, no consultations had been held with the broad groups in society at local level, who after all were supposed to be the beneficiaries of the Plan. Here, Diallo sees parallels to the New Partnership for Africa’s Development (NEPAD). This was a further initiative that people were not familiar with, and here too, the economic aspects were coming more and more to the fore at the expense of the political and social aspects. The chief objective of the Marshall Plan was to address investors, whereas civil society was left out. Diallo would prefer to see the regional economic partnerships as negotiating partners instead of the African Union, “which is financed more than 70 per cent by Europa and the USA”.

The right choice of partners?

“To us, it is important to have the AU – the sole legitimate organisation from a government view – as a contact. However, it is indeed preferable to have concrete implementation in the hands of the regional communities, and then in those of the countries,” said Stefan Oswald, Head of the “Afghanistan and Pakistan” Department at Germany’s Federal Ministry for Economic Cooperation and Development (BMZ). Consultations had accordingly been held with the Southern African Development Community (SADC) and the East African Community (EAC). Oswald also reminded the meeting that the Marshall Plan had been presented as a benchmark paper for discussions and that its contents had clearly been derived from Agenda 63 – the framework that the African Union itself had adopted for a socio-economic transformation of the continent. Feedback from national and international civil society would of course flow into the debate.

Is “openness to reforms” the right criterion?

One of the crucial factors for co-operation in the context of the Marshall Plan is supposed to be countries’ “openness to reform”. So would fragile states and their inhabitants be shut out? “I have strong reservations here. We definitely ought to continue years of working together with these countries wherever possible,” Schäfer-Preuss maintained. Especially in countries like Sudan/South Sudan, many people were living in poverty and could not simply be left to their own devices.

“Of course, the type and extent of co-operation that we offer the different African countries also depends on how we can implement it and how it fits into the context,” Oswald responded. For example, he ruled out countries like Ethiopia, given its government’s extremely restrictive treatment of certain ethnic groups, as partners. Nevertheless, stabilisation efforts e.g. in Mali and Niger would be continued. Additionally, other instruments, such as transitional aid in emergencies or flanking measures in civil society co-operation would be retained, the BMZ representative ensured.

Which investments do we need?

Private investment is a key element of the Marshall Plan. It is needed to create jobs and also to diversify the economy. However, Diallo maintained that precisely the opposite was currently the case. For example, Chinese investors brought along their own labour, while the diversification of the continent’s economy had declined to the level of post-colonial times, especially in countries rich in natural resources. Each investment needed to be very carefully assessed in terms of what social policy impacts it was going to have in the countries concerned; frequently, local industry lost out in the end, turning self-sufficient regions into food importers.

Christoph Kannengießer, Chief Managing Director of the German-African Business Association, pointed out that from Germany in particular, the flow of Foreign Direct Investments in Africa tended to be rather modest at the moment, with the exception of the Republic of South Africa and some North African countries. Just two per cent of Germany’s foreign trade, corresponding to a value of 20 billion euros, is earned via business with Africa. “Fifty-four countries with 54 different market access regulations do not exactly offer attractive conditions for direct investments,” said Kannengießer. Ultimately, foreign investment could only contribute to the continent’s development through support being given to regional integration. However, a number of preconditions had to be fulfilled for enterprises, in particular medium-sized ones, to engage there: a certain level of political stability, legal certainty and a functional judicial and administrative system, reliable energy supply, some risk hedging and support in negotiations.

Kannengießer does not see any contradiction between entrepreneurial interests and sustainable development. German companies were being considered because one was aware that they were doing a lot for local development – for example in the fields of training and upgrading, integrating labour at local level education and training or complying with social and ecological standards. “Not only have we got a very critical audience in Germany that always keeps an eye on what we are doing, but we have also noticed that we can conduct our business more sustainably and, in the long run, more profitably if we observe standards in the markets we are operating in,” said the business representative.

Diallo was rather more sceptical, referring to the example of Sierra Leone, where the Belgian company Socfin has bought up large tracts of land on which oil palms are now being grown to supply the world market. Today, many local farmers are worse off than they were before the investments (also see the article “Those in darkness drop from sight”). He advocated promoting the social business approach more strongly in the Marshall Plan. In addition, he drew the attention of the participants to the Plan’s obvious asymmetry. Germany, with its 80 million inhabitants, was facing a continent with a current 1.3 billion people and the most rapidly growing population. “I think it would be better not to straightaway try to save all of Africa. It would be much more expedient to select perhaps three or four nations with which one could develop common plans,” Diallo maintained.

Making use of the Marshall Plan as an SDG instrument

At the end of the event, the discussants once again summarised what they thought a “Marshall Plan” with Africa should achieve: a partnership at eye level, greater involvement of civil society – above all in rural areas, and above all women and young people, making use of lessons learnt from past decades of development co-operation, initiating more political and democratisation activities in Africa and not putting so much emphasis on economic processes, involving the diaspora (bearing in mind that remittances constitute three to four times the amount of Official Development Assistance), und last, but not least, viewing the Marshall Plan from the angle of the Sustainable Development Goals and as an instrument for implementing them. This would for example also mean looking at the degree to which solutions for Germany could be found in co-operation with African societies.