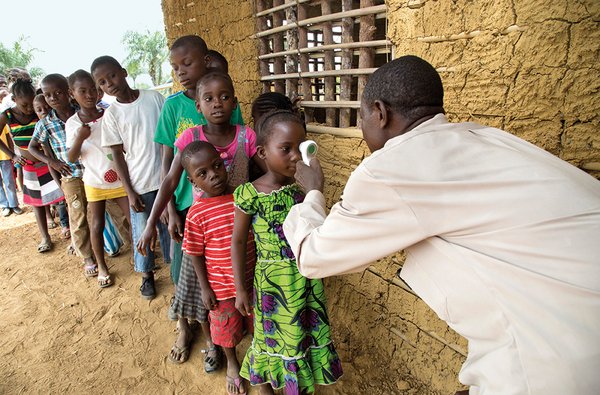 After re-opening in March 2015, all schools in Liberia are required to set up a body temperature check for all students and visitors.
Photo: K. Hiromi/Polaris/laif

The impact of Ebola on food security in West Africa

Not only has the Ebola epidemic cost many people’s lives. It also bears far-reaching consequences for the economies of the countries affected. Around a quarter more of the people are now affected by food insecurity than before the epidemic. This above all applies to the rural population, as the following evaluation of the situation shows.

Three West African countries, Liberia, Sierra Leone and Guinea (the so-called Mano River Region) have been hard hit by the outbreak of the human disease of Ebola, at the top of the agenda since July 2014. The losses of lives, the suffering of the people who came under quarantine, and the grief and crisis for the dependent family members are just one aspect of the emergency. The other aspect is its economic impact on the societies already under extreme stress. Everyone in these countries was affected by the shocks of a war-like situation. The main repercussion derives from aversion behaviour driven by a fear of contagion. These behavioural effects impact factor and commodity markets, labour input and production, and people’s livelihoods, and they have retarded economic growth.

All three West African nations are already poor, and they belong to the ten countries of the world with the lowest Human Development Index (HDI) (see Table below, in line 8). The Ebola outbreak makes them even poorer and people’s lives even more devastated. Sierra Leone and Liberia have both emerged from horrific civil wars. Their societies enjoyed high economic growth rates in pre-crisis times. Many good efforts to regain a functioning infrastructure and economy have been crippled. 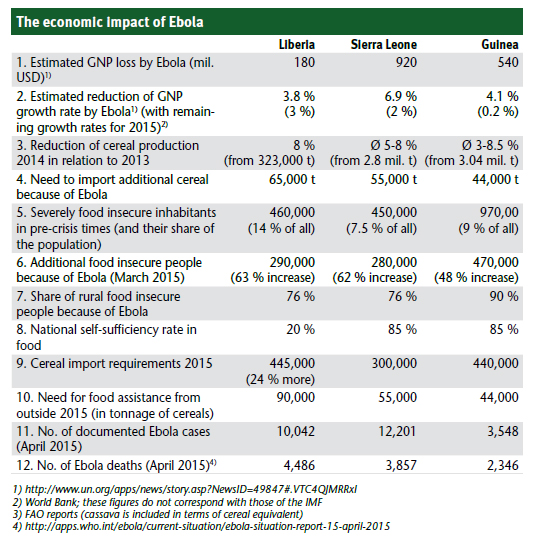 In order to estimate the impact of the disease, the UN Food and Agriculture Organization (FAO) and the World Food Programme (WFP), in collaboration with the governments and other partners, have actively carried out Rapid Assessments with field studies. Their collected figures have been inserted into an econometric model of Disease Impact on Agriculture Simulation (DIAS), a model developed by the FAO. It has been supplemented by the results of the WFP Shock Impact Simulation Model (SISMod-Light). These two sources have provided most of the figures in this article.

To quarantine the virus in the epicentres of the disease, the governments introduced road blocks manned by police and military, preventing the movement of farmers and labourers, as well as the supply of goods. Côte d’Ivoire and Senegal have imposed restrictions on the movement of people and goods, including border closures. Most airlines stopped their connections to the Mano River Region. Traders withdrew from linking farmers to the markets. The food markets in towns and even in rural areas ran down to a minuscule of normal supply for many months. Some temporary market closures took place by government in most affected areas to prevent crowds from meeting. Rural inhabitants of the most affected areas abandoned their farms and villages to escape the threat of infection. Banks and shops reduced their opening hours drastically to min-imise contact with clients. In the very important mining sector, on the rubber plantations and with other export sectors, work was disrupted because labourers feared to mingle with others. Ministries and public offices stopped working. The schools and universities suspended operation for more than six months. There was no business as usual any more in public life. Drastic income reductions, limited opportunities for petty business and price inflations for food on the markets had a general effect on people’s livelihoods.

Fiscal revenues declined by the magnitude of 4.7 per cent of GNP in Liberia and 1.8 per cent in Guinea and Sierra Leone each, as predicted by the World Bank. In 2013, before the outbreak, the economic growth rates were substantial, ranking Sierra Leone second and Liberia sixth among the top ten countries with the highest GDP growth in the world (albeit starting off with very low GDP base levels). The International Monetary Fund (IMF) had forecasted that GDP growth in 2014 would amount to 11.3 per cent, 5.9 per cent and 4.5 per cent for Sierra Leone, Liberia and Guinea respectively. In mid-August 2014, the IMF revised these estimates to 8.0 per cent, 2.5 per cent and 2.4 per cent accordingly. In absolute figures, these losses amount to 1.6 billion USD as foregone GNP for the three countries. Of the losses, the World Bank estimates that 500 million USD is directly attributable to eroded consumer and investor confidence and the disruption of mobility because of the epidemic.

Two factors came together that aggregated the impact of the crisis on food security. First, the timing. The outbreak of July/August 2014 happened in the peak season of agricultural planting, leaving fields unfarmed and the crops neglected. Liberia was most affected by this. Second, the regional epicentres of the disease happened to be some of the “grain baskets” of Liberia (Lofa and Margibi District; production decreased here in these months by 25 %), in Sierra Leone (Kailahun and Kenema, minus 10 to 25 %) and in Guinea (Guéckédou and N’zérékore: minus 8.5 %) (FAO). Overall, the rice harvest of October/November 2014 was about eight to twelve per cent less than in the previous years.

The shortfalls of the countries’ own cereals led to a rise in food prices in Liberia, but not so much in Sierra Leone, in the second half of 2014. In many markets the prices surged by 40 per cent. The breakdown of trade and transport was the main reason for this inflation. The FAO explains the lower yields by people’s fear of Ebola. Their insecurity about the transmission of the disease paralysed activities. This is true for farmers failing to go to the fieldwork and for the middlemen failing to deliver their trading services to the villages. The traditional community-based cooperative group work of the “Kuu”-system in Liberia, which carries out brushing and cleaning of agricultural plots, broke down completely. Yields decreased because agricultural inputs were hardly applied anymore, since credit availability had been significantly restricted.

Liberia is highly dependent on food imports, with a self-sufficiency of cereals of only 20 per cent (see Table below, line 8). The import capacity suffered considerably by the reduction of the export capacities through Ebola (mining and agriculture), and by the depreciation of the domestic currencies. The estimated additional import needs of cereals (see Table below, line 9) cannot be covered under normal commercial terms, with people lacking purchasing power. The necessary imports require international assistance, either as ODA, as credits or as physical food aid, mainly for free distribution to the most affected people. A voucher system for administrating entitlements would be needed. 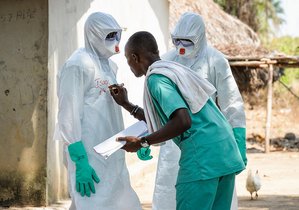 As one of the poorest areas of the world, the Mano River Region has always been characterised by substantial numbers of severely food insecure people. The number of hungry has been inflated by an estimated quarter through the impact of Ebola. Surprisingly, most of the additional severely food insecure people live in rural areas (see Table below, line 7). The number of people vulnerable to food insecurity in Liberia was an estimated 1.1 million in March 2015; in Sierra Leone, the respective number was 2.1 million, and in Guinea 2.9 million. (People with a level of calorie intake of less than 1,799 Kcal/day are “severely insecure”, while those with levels between 1,800 and 2,099 Kcal daily intake are just (moderately) “food insecure”. The borderline is 2,100 – 2,399 Kcal.)

From emergency to recovery

Since the beginning of 2015, it seems that the virus infections have been stalled. With increased awareness on Ebola, over time, people are losing their worst agony. Markets have reopened, and trade is showing signs of recovery. However, food insecurity still remains much higher than normal, since households were not yet able to replenish their food stocks for the May/June lean season. An FAO report indicates that over 1.2 million people in these three countries need immediate assistance to reduce acute malnutrition. Economic recovery will take time, and many families will still face problems as a result of the disease for long to come.

Rudolf Buntzel
Consultant; from 2011–2013 lecturer at the University of Liberia
Berlin, Germany
rudolf.buntzel@gmail.com

The research was initiated by the Fellowship of Christian Councils and Churches in West Africa (FECCIWA) and is part of an inception report of an ongoing project that also deals in a narrative way with stories and events in communities and markets in the affected countries.