Both the high consumption of blue water and the regional scarcity in the producing countries contribute to the large water scarcity footprint of rice.
Photo: Satyam Joshi/USAID

Our 1/20 issue of Rural21 featured the concept of the Water Footprint. Our author applied the concept in cooperation with TU Berlin for the European Union food and cotton imports, arriving at the result that more than 70 per cent of imports come from countries with high or moderate water scarcity.

Today, more than two billion people live in countries with high water stress, in other words, in a permanent state of limited access to clean water. Water stress means that locally, more water is drawn than can be regenerated via natural water cycles.

Half of the world's population – 3.6 billion people – currently live in areas with acute water shortage for at least one month each year. In other words, in these particular areas, water resources are not enough to provide the population with drinking water and food.

Increasing water stress also challenges Europe's “lifestyle”. Europe's water footprint – the total volume of water used to produce all goods consumed by European citizens – has been significantly outsourced to other parts of the world. In 2015, approximately eleven cubic square kilometres of ground and surface water was imported into the EU in this manner. Much of the rice, sugar cane and cotton imports comes from areas with significant water shortage or incipient water stress. This means that the water resources in situ are seriously exhausted and there is increasing competition over the available water.

To meet rising external demand, yields in exporting countries are often being increased by year-round irrigation. The doubling of the world's irrigated area over the past 50 years, combined with the intensive use of fertilisers, pesticides and high-performance seeds, has contributed to enormous increases in agricultural production; today, according to global estimates of the United Nations, around 40 per cent of the utilised agricultural area is for food, produced with the “support” of irrigation.

However, this leads to considerable environmental problems and excessive use of water resources. Today, many water shortage regions are forced to reduce irrigation and intensive monoculture production, restore waters and their ecosystems, and undo overuse and damage from intensive irrigation farming. In 2015, the United Nations stated water stress in 41 countries, compared to 36 in 1998. Ten countries used more than 100 per cent of their renewable freshwater resources. These were on the Arabian Peninsula, in North Africa and in Central Asia.

Once a country reaches a cut-off of more than 100 per cent, it begins to reduce its renewable groundwater resources by resorting to non-renewable groundwater from deeper layers of the Earth. Extraction of water from non-conventional water sources such as desalinated water is very energy-consuming and costly. Also, the purification and treatment of wastewater (grey water) is costly, and this water is currently only conditionally used as irrigation water. 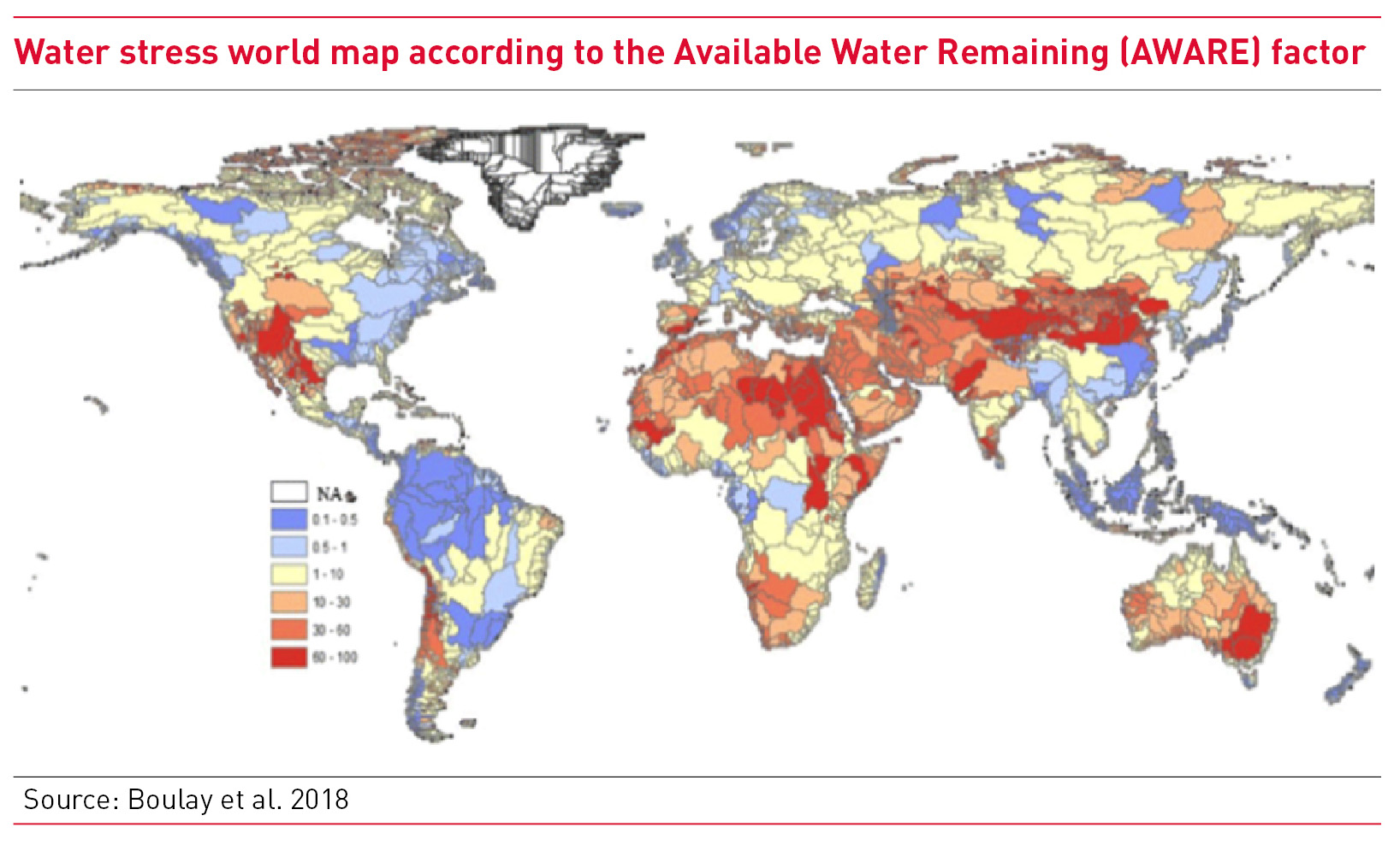 However, even in countries with an average low water scarcity (AWARE factor 0-20), such as Brazil, water scarcity problems can occur, as individual states (Minas Gerais, Espirito Santo) may be water short around a few months.

In a survey that we conducted for Brot für die Welt in 2019, our research focused on the Water Scarcity Footprint (WSF) caused by European agricultural imports in the producing countries. The import flows in 2015 were analysed and assessed with regard to their blue water consumption and in the context of local water shortages in the exporting countries (based on Chatham House data). For this purpose, the imports of blue water from different countries (m³) were multiplied by their country-specific water scarcity factor (m³ world equivalents/m³). The resulting scarcity-weighted water imports (m³world-eq.) allows a direct comparison of virtual water imports from different countries, thus identifying particularly relevant agricultural products and exporting countries. The virtual water data are from the Water Footprint Network databases for plant and animal products. National average values (water scarcity factors AWARE) were used to calculate the WSF.

Hotspots and problem products of the EU

The product categories cotton and nuts alone account for 50 per cent of the WSF of the agricultural products studied (see Figure). By contrast, the weight contribution of these product categories was only two per cent of total imports. The high contribution of cotton and nuts to the WSF results from very intensive irrigation and their supply from mainly water-scarce countries. 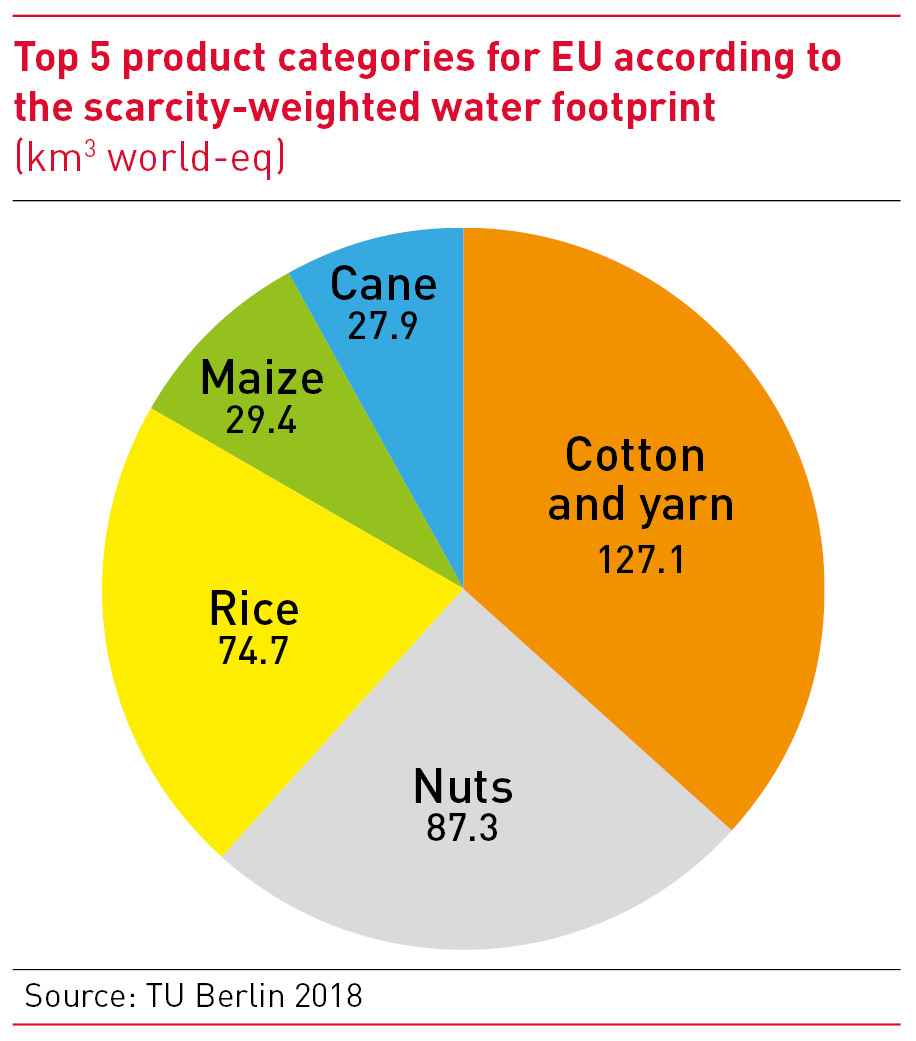 Cotton is grown mainly in Turkey, Egypt, India and Pakistan, countries suffering from high regional water scarcity. Nuts are imported to the EU chiefly from the US, Turkey and Iran, where water availability varies seasonally and includes regions with moderate to high water scarcity. Rice, whose imports account for 18 per cent of the WSF, is grown mainly with surface irrigation, which requires a large amount of water. Rice is considered one of the biggest water consumers of all crops. It is estimated that 30 per cent of the world's freshwater intake is destined for rice production. Both the high consumption of blue water and the regional scarcity in the producing countries contribute to the large WSF of rice. The largest WSF in terms of rice imports into the EU can be found in Pakistan (62 %), Egypt (17 %) and India (11 %). These countries are subject to fluctuations in water availability throughout the year.

The largest WSF of corn imports can be found in Ukraine (72 % of the total WSF) and in Russia (23 % of the total WSF). In Ukraine, the main growing areas for maize are located in the eastern and southern regions of the country, where precipitation is very low. Irrigation is the main activity here to ensure higher yields. According to FAO, between 2007 and 2012, the area for corn irrigation increased by 73 per cent. Russia has expanded its maize production, mainly in the southern part of the country, in the Volgograd region, which is considered to be semi-arid.

Soybeans have a significant impact compared to the other categories. The WSF caused by soybean imports is found mainly in the USA (98 %). Other major soybean exporters, such as Argentina and China, account for less than one per cent of the EU's total WSF. While in countries such as Argentina and Brazil, soybeans are predominantly produced in rain systems, 8.5 per cent of US soybeans are produced under artificial irrigation, with water consumption more than twice that of the world average. 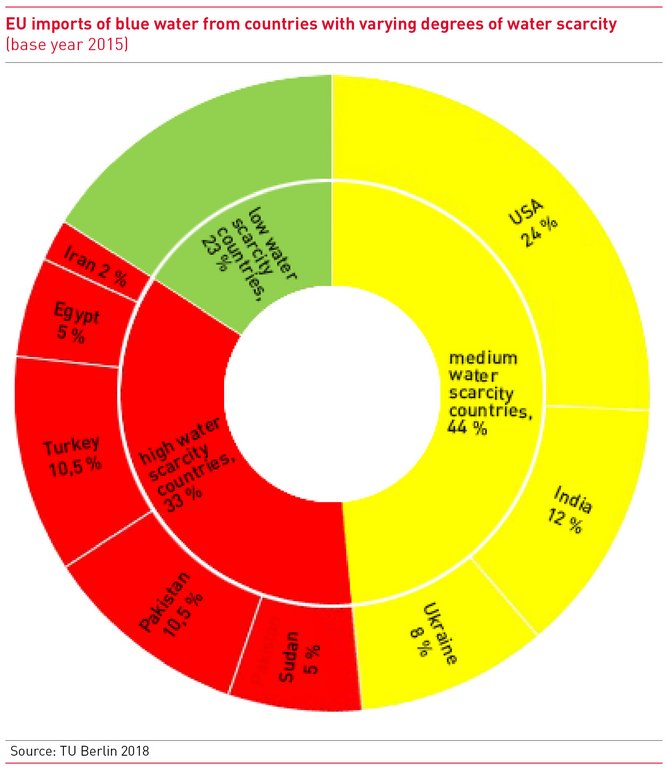 As part of the implementation of the SDGs, the EU should work to reduce water stress in the context of export production. This also includes data collection in the affected countries and regions, and helping to ensure regionally and locally efficient control mechanisms and effective participation of the various user groups in the award and exercise of water rights. In addition, bilateral and multilateral cooperation should focus on locally adapted measures such as increasing irrigation efficiency. Public administrations and water utilities in water-stressed and water-scarce regions must set and implement policies for investment addressing water shortages in their territories. Above all, improving agricultural productivity means using resources in agriculture more sustainably.

In the exporting countries, conditions must be created that lead to the distribution of resources being geared to the needs of local food security, taking into account the access rights and the voice of local users (SDG 6b). Mono-intensive cultivation in fragile ecosystems must be stopped, and the restoration and preservation of natural water cycles must be promoted. In increasingly water-stressed regions, the naturalisation of land should be promoted in cooperation with local people, such as in the coffee and eucalyptus growing areas in Brazil.

It is important to achieve a reorganisation of international water architecture that establishes committed measures against overuse, damage or pollution of groundwater, aquifers and surface waters. States are responsible for adapting national laws and regulations to United Nations declarations, resolutions or agreements. Since human rights are subject to higher regulatory standards, states must ensure the continued protection of human rights to water and environmental guarantees fulfil rights of peasants and other people working in rural areas, also against corporate agroindustrial interests and powers. The following activities are mandatory:

Ingo Gentes is a freelance independent Applied Researcher, Project Coordinator, Assessor (ex ante, mid term, ex post) of international water and socio-environmental projects and Assistant Teacher (Sociology of Law & Nature, Governance and participation, rural and legal anthropology, methodology of qualitative sciences) as well as Coach for German as a foreign language. He is socially engaged in several non-governmental organisations, among them the German Environmental Movement (Die Naturfreunde), the Union (VERDI) and the international platform Water Justice (Justicia Hídrica). He holds a PhD in Social and Political Science from Freie Universität Berlin.

The present article is based on a joint study of the author with the TU Berlin, which was financed and published by Brot für die Welt (2019). First results have been published in Finogenova et al. (2019). A German Version of article will be published in Zeitschrift für Umweltpolitik & Umweltrecht (ZfU), 2/2020:123–164

Chapagain, A. K. and Hoekstra, A. Y. (2010): The green, blue and grey water footprint of rice from both a production and consumption perspective, UNESCO-Institute for Water Education- Research Report 40, S. 1–62.

Climate resilient food systems for africa: from evidence to action