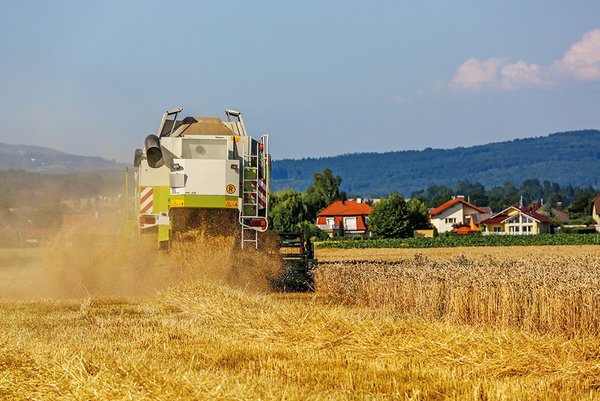 Even now, Europe does not have enough land to cover its demand for agricultural products. The transition to the bioeconomy massively increases this demand.
Photo: Bilderbox.com

Tailoring the bioeconomy to food security

Bioeconomy strategies can contribute to poverty reduction – provided that they are circumspectly designed. Binding regulations are needed guaranteeing that the human right to adequate food is not threatened. Sustainability standards only make sense if the primacy of food security is not only formally integrated in them but is also anchored by verifiable criteria.

A few years ago, the European Union and the United States of America took a crucial step towards the bioeconomy by deciding to introduce and promote biofuels. This political target has led to a broad public debate on “food before fuel”. While politicians, bioenergy associations and environmental and development organisations are still struggling for a compromise on biofuel quota, the use of biomass has increased almost unnoticed in other sectors. Here, possible impacts on global food security are seldom examined. For example those of bottles made of bioplastics gained from sugar cane. Or bio-dowels based on castor oil. Neither is the question raised how our cows are going to graze when rubber is gained from dandelion milk for our winter tyres in future. Of course we want to bid farewell to an economy centring on the environmentally harmful use of fossil resources. The use of biomass is an important element of an ecologically sustainable mode of economy – not only in the energy sector. But just like with biofuel, for any use of biomass for non-food purposes, it is essential to make an optimally accurate assessment of the global impacts and guarantee the primacy of food security. To this end, forward-looking and binding political guidelines are just as important as prudent entrepreneurial action.

Today, every third human being is still suffering from hunger – 842 million people world-wide. At least 70 per cent of them live on agriculture in the rural regions of the developing countries. Through the transition from the fossil economy to the bioeconomy, these regions, which are especially hard-hit by poverty and hunger, will tremendously gain in importance. Together with water, solar radiation, heat and cheap labour, their fertile soils offer ideal cultivation conditions for the production of biomass. Without the use of these resources, the implementation of the European and German bioeconomy strategies is hardly conceivable. Already today, Europe’s cropland is no longer sufficient, and the EU requires an additional 25 million hectares of agricultural area abroad to cover its demand for agricultural products (Noleppa, v. Witzke and Cartsburg 2013). This corresponds to the area of Great Britain. The transition to the bioeconomy is going to further raise the demand for agricultural commodities, and in developing countries in particular, it will have a massive impact on agricultural production based on smallholdings.

The implementation of the exaggerated biofuel targets has shown us that in spite of legal environmental provisions, fuel crops are not only exacerbating the excessive exploitation of nature but that indirectly, they have triggered severe social maldevelopments. In many places, land-grabbing in developing countries and strong increases in food prices are plunging poor people into hunger. In biofuel policy, it is in particular the social impacts that have been eclipsed for too long. This is one of the reasons why biofuels are seeing such a low level of acceptance in society. What counts now is to learn from these wrong decisions and developments and design the production of biomass especially in the developing countries in a manner that will ensure a contribution to food security and poverty reduction.

Prudently conceived bioeconomy strategies can contribute to poverty reduction both at global and local level. They can do so globally because in the EU or the USA, for example, less farm surpluses are accumulated that are sold to poorer countries at dumping prices and make smallholder agriculture there unprofitable. Also, the bioeconomy can contribute to combating global warming, which is particularly important for smallholders. They live in regions that are especially hard-hit by the consequences of climate change, without having caused it. Lastly, modern use of biomass points to options that developing countries can seek to largely leap-frog the fossil economy stage.
However, it is particularly important to take advantage of the demand for biomass to reduce poverty in poor rural regions. Across the world, more than 400 million smallholdings can be integrated in biomass production. This is precisely what failed in biofuel production. High demand has resulted in an expansion of plantations and largely excluded rural agriculture. What is needed is a bioeconomy policy promoting a gentle increase in the demand for biomass. Smallholders must have time to get reorganised, e.g. in producer groups and co-operatives. Cultivation methods and market access need to be improved. These processes take time, time needed to develop impoverished smallholdings towards farms whose production is economically viable and socially and ecologically sustainable.

Already in 2004, the United Nations agreed on guidelines for a right to adequate food containing a paragraph on “International co-operation and unilateral measures”, which also says that:

“States are strongly urged to take steps with a view to the avoidance of, and refrain from, any unilateral measure not in accordance with international law and the charter of the United Nations that impedes the full achievement of economic and social development by the populations of the affected countries and that hinders their progressive realization of the right to adequate food.”

A commitment can be derived from this appeal, which is supported by all UN members, to not only examine possible national impacts in using biomass for non-food purposes but also assess what effects they could have on other countries. The introduction of a “policy impact assessment on global food security” could ensure that possible desired and undesirable consequences of policies for global food security are explicitly debated in political parliamentary deliberation and decision-making processes before decisions are taken. In Germany, this would, for example, mean that the existing procedure of legislation impact assessment be extended by the component of “international responsibility”, with a special focus on possible consequences for food security. Moreover, taking the global dimension into account in legislation impact assessment would lead to greater coherence between all domestic and foreign policy fields.

The bioeconomy strategies of the EU (2012) and the German Federal Government (2013) ensure that the primacy of food security is taken into account. As yet, however, no scientifically based standards and benchmarks have been introduced that would allow for examining whether the human right to food is taken into account in the production and use of biomass. So far, provisions have only been made for a certification of biomass used for fuel purposes, i.e. certified palm oil has to be filled into the petrol tank while the non-certified oil is for on the plate (e.g. as margarine) or on the skin (e.g. in cosmetics). In addition, the biofuel criteria hardly consider social aspects. Appropriate legislation is necessary but is currently being planned neither at national nor at European level.

The transition to the bioeconomy contributes to the clear division between biomass being used for food, fodder, energy or industry being blurred, since the markets are increasingly overlapping. This is why a global biomass standard is required that regulates the production of all types of biomass for their various areas of use (food and fodder, energy and materials) at cross-country and cross sector level. Here, both ecological and economic and, above all, social sustainability criteria have to be integrated. Only then can it be ensured that non-food use of biomass does not endanger the human right to food. In introducing standards, it has to be ensured simultaneously that they do not turn into a development obstacle. Two risks must be considered in particular here:

Establishing food security as a binding criterion for sustainability

So far, only few proposals have been made on assessing food security aspects in the use of biomass. The Roundtable on Sustainable Biomaterials (RSB) has proposed a guideline for food security assessments as well as criteria for an improvement of the local food situation (2012). However, because of its extremely complex assessment methods, this comprehensive guideline has not found significant use in practice. Neither have the manuals issued by the Food and Agriculture Organization (FAO–BEFSCI) and the Global Bioenergy Partnership (GBEP) been applied practically. Moreover, existing standards tend to be more applicable for large-scale enterprises (incl. plantations) and do not consider the options that smallholders have for their implementation, so that there is a danger of systematically excluding smallholders. The demand for manageable food security criteria has been discussed from various angles in the context of the German Federal Government’s “Initiative Sustainable Supply of Raw Materials for the Industrial Use of Biomass” (INRO). Government authorities and certification agencies, research institutions, environmental and development NGOs, and in particular businesses have criticised this omission in the various standards and certification systems.

The Center for Development Research (ZEF) at the University of Bonn in Germany and Welthungerhilfe have set themselves the task of filling this gap and developing scientifically sound criteria for food security based on the human right to food and the four pillars of food security (availability, stability of supply, access and utilisation). In practice, this means considering and implementing the Voluntary Guidelines on the Human Right to Adequate Food.

The aim of the project is to provide manageable standards

The production of biomass has to meet the priorities of the people in the growing regions and contribute to adequate living standards in the long run. In an interdisciplinary context, development criteria are to be developed that consider the standards of science, civil society, politics and also businesses. The aim is not to introduce most demanding criteria overnight, but to be able to implement successively higher social standards.

More and more non-food products are being produced with agricultural raw materials. Biofuels policy has failed to perform the balancing act between non-food use of biomass and the creation of global food security. But it is precisely this balance that is needed if the transition to a bioeconomy is to be sustainable. The degree of taking the human right to adequate food into consideration both in policy design and in entrepreneurial action is going to be crucial to whether bioeconomy strategies will impede access to food for poor people or, in the favourable case, contribute to combating poverty.