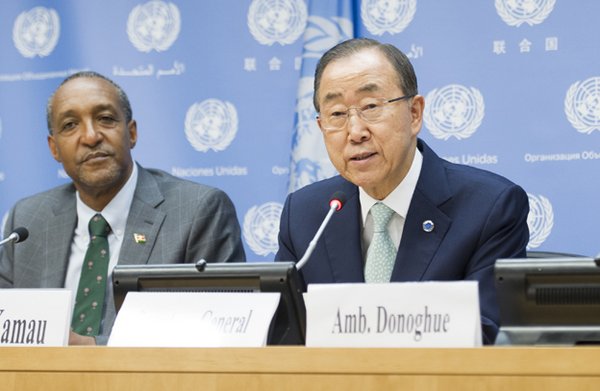 Secretary-General Ban Ki-moon (r.) addresses a press conference on the agreement achieved on 2 August on the outcome document of the United Nations Summit to adopt the post-2015 development agenda. Left to him: Macharia Kamau, Permanent Representative of the Republic of Kenya to the UN.
Photo: © UN Photo/M. Garten

The member states of the United Nations have reached agreement on the Sustainable Development Goals (SDGs) that are to be implemented by 2030. The Goals, which include the eradication of hunger and poverty, are to be approved by an international summit in late September.

The SDGs are to enter force on the 1st January 2016, and replace the Millennium Development Goals (MDGs), which were approved by the heads of state in 2000 and end this December. Areas that the 17 new Goals address in addition to hunger and poverty include sustainable development, climate change, water and sanitation, sustainable energy, gender equality, human rights, education, industrialisation and full employment.

UN Secretary-General Ban Ki-moon spoke in New York of a “People’s Agenda, a plan of action for ending poverty in all its dimensions, irreversibly, everywhere, and leaving no-one behind. It seeks to ensure peace and prosperity, and forge partnerships with people and planet at the core.” However, achieving the new goals comes at a price. The estimated 3.5 trillion to 5 trillion US dollars a year required implement the new agenda dwarfs even the hundreds of billions the UN has called for to finance development in the past. All 193 member states are expected to mobilise their resources to implement the Goals.

The go-ahead for the SDGs has been welcomed by several non-governmental organisations. The ONE campaign, a coalition of NGOs including Germany’s Bread for the World, Oxfam USA and WorldVision that combats poverty and disease in developing countries, stresses the potential the new agenda has in this area. The International Women’s Health Coalition expects the SDGs to be especially beneficial to women and girls. And the Worldwide Fund for Nature (WWF) emphasises the approach to commit all countries to take action towards the new goals. Comparing the SDGs to the MDGs, it also points out that the new Agenda recognises the links between sustainability of ecosystem services, poverty eradication, economic development and human wellbeing.

Jens Martens, Director of the Global Policy Forum, based in New York, USA, agrees that the new Agenda is unique in calling on both rich and poor countries to assume responsibilities. However, he regards financing the new goals as a critical issue. “Implementing the goals calls for fundamental changes in fiscal policy,” Martens argues. “In this respect, the new Agenda is vague. Without sufficient means, the Goals cannot trigger the transformation process that the Agenda refers to.”

Third World Network (TWN), a non-profit international network of organisations and individuals addressing development, developing countries and North-South affairs, also takes up the issue of financing. The Agenda refers to two main sources of finance. Private money will be provided via multi-stakeholder partnerships and processes like the Global Financing Facility, which was launched at the recent United Nations Financing for Development Conference in Addis Ababa, Ethiopia. The second chief source is domestic money from the developing countries. No new international money has been committed.

TWN criticises the lack of intergovernmental processes or governance models over the multi-stakeholder initiatives in the Agenda that would make them accountable and transparent. Bhumika Muchhala, a senior policy analyst with TWN, claims that decision-making in the Global Financing Facility, for example, will be done behind closed doors by a small group of major financial investors and private sector actors contributing to the Facility.