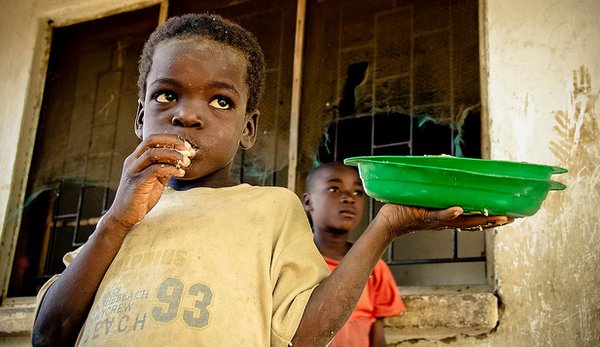 Millions of children are at risk from hunger.
Photo: © FMSC/Reach Now International (flickr)

Millions of children are at risk from hunger and diseases as a result of a strengthening El Niño, warns UNICEF. At the same time, scientists from ILRI urged to prepare for El-Niño-related Rift Valley fever epidemics in eastern Africa.

An estimated 11 million children are at risk from hunger, disease and lack of water in eastern and southern Africa as a result of a strengthening El Niño, which is also causing droughts and floods in parts of Asia, the Pacific and Latin America, UNICEF warned in November 2015.

The consequences could ripple through generations unless affected communities receive support amid crop failures and lack of access to drinking water that are leaving children malnourished and at risk of killer diseases, UNICEF said in report called A Wake Up Call: El Niño's Impact on Children.

Besides the immediate risks of death and injury, El Niño can lead to significant increases in diseases such as malaria, dengue fever, diarrhoea and cholera. When extreme weather deprives communities of their livelihoods, young children often suffer from undernutrition, which puts them at greater risk for illness, delayed mental development and premature death.

Recent climate predictions also suggest East Africa may be in line for an epidemic of Rift Valley fever – an infectious disease which can hit people, their livestock and livelihoods, and national economies hard, the International Livestock Research Institute (ILRI) warned in November 2015.

At least two of the most recent Rift Valley fever epidemics in East Africa—those in 1997-98 and 2006-07—were associated with El Niño weather patterns, with Kenya suffering losses amounting to USD 32 million.

Given the strong predictions of an El Niño occurrence and the established association between El Niño and Rift Valley fever risk, countries in the Horn of Africa need to start preparing to manage the developing risk.

In particular, public education on the linkages between the expected weather patterns and disease risk is vital to minimize human exposure to the disease should an epidemic occur.

Countries that are most affected by El Niño include:

El Niño is a climate pattern linked to the warming of surface waters in the Pacific Ocean, which can
have a profound effect on weather patterns around the world. El Niño events tend to happen every two to seven years.

Download the report: A Wake Up Call: El Niño's Impact on Children