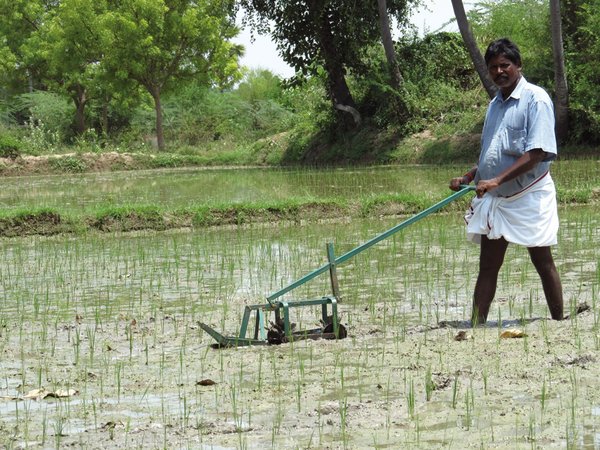 A farmer using a Konoweeder on his SRI field.
Photo: S. Rajeesh

SRI – the solution for small farmers in India?

Despite criticisms, the System of Rice Intensification (SRI) is gaining popularity among small and medium farmers in India not just because it has high potential in increasing rice yield, but also because it uses much less seed and water.

Rice is the staple food for the majority of the population in developing countries, and for India, this grain contributes 65 per cent of the total food grain production in the country. Researchers have constantly been working towards developing better and efficient grain production techniques that will not just produce a good yield but also use smaller quantities of natural resources in the process. The System of Rice Intensification (SRI) is emerging as a potential alternative to traditional flooded rice cultivation. In a country like India, where it takes about 70 per cent of the country's groundwater to produce this rice, opting for a technology that uses much less water makes perfect sense. Water is increasingly becoming the single most limiting factor in the production of food grain, especially in rain-fed locations, and despite irrigation, use of pest-resistant high-yielding varieties and high inputs of fertilisers and pesticides, rice yield is plateauing.

Paddy cultivation in India has always been traditional, and farmers believe that rice is an aquatic plant and grows best in standing water. While this is not the case, it can survive in water. Under SRI, paddy fields are not flooded but kept moist in the vegetative phase. Later stages require that only an inch of water is maintained, suggesting that just about half as much water as normally applied in irrigated rice is required. So when SRI was introduced, it was received with plenty of cynicism because it deflated all the myths of cultivating rice.

While agreeing on some of the points raised by critics like Achim Dobermann, Deputy Director General Research, International Rice Research Institute (IRRI), on uncertainties regarding the effectiveness of SRI and his opinion that it is just an existing system of conventional agricultural practices, R S Shanthakumar Hopper clarifies: “Fluctuating results in yield do exist because SRI has different connotations for different land types, but these limitations do not mean that it can be written off. Effectiveness lies in good land and water management.” Hopper stresses that, “We have to look at SRI in the context of climate change; it works excellently in rain-fed areas!”

Dr Hopper is Programme Director with M S Swaminathan Research Foundation (MSSRF) and heads the JRD Tata Eco-technology Centre, a not-for-profit Institute that specialises in the use of science and technology in an attempt to sustain human livelihood and, in the process, conserve nature. The Centre conducts research and development in areas of food security, biotechnology, etc.

Farmers in India still swear by the conventional methods of cultivating grain that involves initial ploughing, and then smoothing the field using fertiliser consisting of cow dung. The seeds are transplanted by hand, and care is taken so that the soil remains wet and the crop remains submerged at all times.

Contrary to the popular view that higher rice yield is only possible with high investment in seed, irrigation and big doses of fertilisers and pesticides, the SRI method of cultivation produces higher yields with less seed, less water and an emphasis on organic manure.

SRI: Six practices to be followed without any compromise for the best results

Planting single seedling: Planting seedlings singly very carefully and gently rather than in clumps of many seedlings.

Transplanting at wider spacing: Spacing them widely, at least 25 x 25 cm from plant to plant and as well as row to row, resulting in the spread of roots and aquiring more nutrients from the soil. This causes more tillers to be produced, and hence more grains.

Keeping soil moist: Keeping the soil moist but not continuously flooded. Draining out excess water since there is no need to maintain standing water.

Use of organic manure: Green/ organic manure or compost to improve soil quality and fertility, soil aeration and microbial activity.

SRI, a combination of several practices (see Box), is simply changes in nursery management, the time of transplanting the seedling, as well as water and weed management. It is very similar to the conventional method of cultivating the rice crop but emphasises specific agronomic exercises in the process. Thus, it is more a system of cultivating the rice crop. Several field practices have been developed around these components to suit land and water quality as well as availability.

“This system of cultivating rice has already helped millions of farmers to at least double their yield if not anything else,” says R. Rengalakshmi, Principal Coordinator, Gender & Grassroots Institutions with MSSRF. She adds that MSSRF has been promoting the SRI method in villages in the States of Tamil Nadu and Orissa since 2000, and that “acceptance has been encouraging, but not without tremendous effort to prove that the technique actually brings excellent results.”

Formal experimentation on SRI in India started in 2002–03. The method is rapidly gaining ground, with State Governments supporting it in Tamil Nadu, Andhra Pradesh, West Bengal, Jharkhand, Orissa, Chhattisgarh and Gujarat. “SRI is working well in Tamil Nadu because farmers get a package subsidy, mainly for seeds, if they use the technique”, Rengalakshmi says.

“It’s not meant for high irrigated areas or low lands,” Dr Hopper says. “It is not as good a success story if you implement SRI in paddy fields in the plains.” Rice cultivation in the hills of Orissa is another good example of how SRI works in highlands. Sakuntala Sabaro of the Saora Tribe, from Tumulo village, Gajapati District, Orissa, was instrumental in changing the mindset of the Tumulo farmers towards adopting SRI, freeing them from their low-yield perennial problem. Sakuntala’s fields were on the hilly regions, and she sowed on terraced land using SRI principles. “I saw three times the yield when compared to the conventional method of cultivating rice,” she confirms. It was her success that motivated about 25 farmers to adopt SRI in Tumulo village.

How SRI benefits the small and marginal farmer

With support in the form of subsidies from State Governments, farmers across India are more than willing to at least experiment with the technique. Farmers in Sorapet village in Pondicherry took to SRI after much convincing. Ponnurajan Manickam owns four acres of land, Sambasivam Varadhan about three and Anand Arumugam around two acres. These small farmers have all been cultivating rice using the SRI technique for close to two years now. Sorapet is a water-sufficient village, so SRI is possible for more than one season. “Last season, I used just three kilograms of seed instead of my usual 50 kilograms for one acre in conventional rice cultivation,” reveals farmer Sambasivam, “yet there was an excellent yield!”

Seventy-seven-year-old Rajaram Reddiar was the first farmer in Sorapet village to start cultivating rice using SRI in 2004. “Every four days a till should sprout, and finally there should be anything between 30 and 50 tills,” he informs. “That’s when the farmer can benefit from this system of paddy cultivation.” He says that he is doing well only because he cultivates SRI on one acre of land and gives it undivided attention. “It’s really impossible to use the SRI principles on large lands because the system is too technical and labour- intensive,” he explains.

Many marginal farmers have also turned to SRI in rain-fed villages such as Thalingji, Naivaipatti and Keelaennai. Plot sizes average about one half to two acres, and most of them barely cultivate enough for self-consumption, let alone to sell in the market. The season lasts for about six months when there is rainfall, and for the rest of the year, farmers leave their villages to work as casual labourers in cities or with landlords.

In SRI fewer plants per unit area are required when compared to conventional paddy cultivation:
SRI encourages organic manure, so less money is spent on fertilisers and plant protection chemicals. The farmers usually cultivate sun hemp and then mow it down just before it begins to flower. This is a good source of green manure. Since weeding by hand is tedious and expensive, most farmers opt for a hand weeder (Konoweeder). Periodical weeding not only removes weeds but also cuts the rice crop roots, allowing new roots to grow, thus resulting in more tills, with the crop receiving nutrients from deeper layers of the soil.
Committed man-days for transplanting and weeding are expensive. But with the recent introduction of a Transplanter, a device for quick and efficient replanting of seedlings, the farmer need only pay 4,200 Rupees (approx. 60 euro) per acre, i.e. half of what he or she spends on manual transplanting. The Transplanter is privately owned, and booking in advance is required.

Mindset of farmers –  a challenge

Principles of applying a minimum quantity of water and the individual transplanting of very young seedlings in a square pattern are opposed to traditional practice. Farmers find it difficult to change over easily.
Ras Vettai, a small farmer from  T Malaipattai village in Pudukottai District, Tamil Nadu, confesses: “I cultivated rice using SRI in 2010 and was happy with the results, but did not continue this in 2011 because the process required continuous crop care, and I found it difficult.” This year, however, Ras has planted a nursery for SRI but has also prepared a bed of rice seed for conventional cultivation. “I know that SRI is a good technique and brings good yield, but for generations, my family has been with conventional rice growing, and it has never let us down either,” he smiles. “Neither does it require too much care. I can plant and leave the field for days. There are just too many restrictions in SRI.”

There are many farmers like Ras Vettai who find it difficult to fully adopt SRI. Most of them are stuck between the two technologies and end up applying both methods of cultivating rice. SRI concepts and practices have continued to evolve in rain-fed conditions. Reluctance is not because of farmers not believing in SRI, but because the system requires sincere commitment to the technique and precise following of instructions in the given time periods.

The real challenge comes during the transplanting stage, and farmers are not used to keeping to precise measurements. Transplanting the seedlings singly with their roots intact, while the seed sac is still attached, is another area of reluctance. Farmers in India have traditionally replanted in bunches.

Conventionally, women do the replanting, simply using their hand to dig a deep enough space to accommodate the rice seedlings bunched together. But SRI requires that the seedling be placed at 1–2 cm in the ground at the appropriate point on the planting grid.

A manual weeder is then operated at intervals of 10–12 days after replanting. This is a welcome change from traditional hand weeding, although conventionally, weeding is not done so often. The root zone is kept moist and not submerged for SRI, another challenge for the farmer.

Under excellent management, even 100 fertile tillers per plant can be achieved; however, the pros and cons of SRI are still being debated. In the meantime, State Governments in India are encouraging farmers via subsidies to try out SRI in a small way and be convinced of the benefits before going full-fledged into this system of rice cultivation.