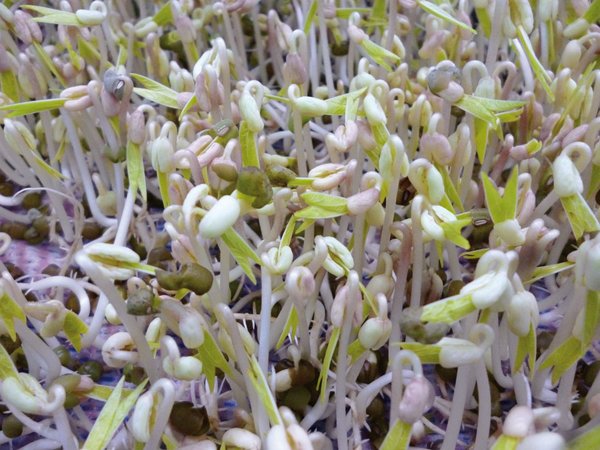 Sprouts and microgreens for a nutritious diet

Recent studies have shown that modern breeding for high yield, visual appearance and long shelf life led to an unintentional decline in taste and the content of essential nutrients in vegetables. AVRDC – The World Vegetable Center is studying whether traditional vegetables are more nutritious than modern varieties and whether early growth stages of these vegetables offer consumers a higher content of phytonutrients.

Diet-related diseases such as obesity, diabetes, cardiovascular disease, hypertension, stroke, and cancer are escalating in developed and developing countries due to imbalanced food consumption patterns and have become a major burden for the public health sector. Health experts are convinced of the multiple benefits of consuming vegetables and fruits and the urgency to take preventive action to control diet-related diseases. The World Health Organization recommends that consumers eat at least 400 grams of fruit and vegetables a day, while the World Cancer Research Fund would like to see this threshold level raised to 600 grams per day. As fruit and vegetables, especially traditional vegetables, are rich sources of vitamins, micronutrients and antioxidants, encouraging frequent consumption of these crops is a good strategy to combat micronutrient deficiency. But are modern vegetable varieties really nutrient-dense?

Recent studies have shown that breeding for high yield, visual appearance and long shelf life may lead to an unintentional decline in taste and the content of some essential nutrients. This was the case for wheat grain (Fan et al. 2008), potato tubers (White et al. 2009) and a number of horticultural crops (Davis et al. 2004). Studies undertaken by AVRDC have shown that traditional vegetables have a much higher density of essential phytonutrients than global vegetables like tomato and cabbage (Yang and Keding 2009). There are also reports in the literature that early growth stages of vegetable crops have higher nutrient density than fully grown vegetables (Xiao et al. 2012).

Through a new project funded by the Council of Agriculture of Taiwan, AVRDC is studying the levels of essential micronutrients and consumer preferences of selected legume crops (mungbean, soybean) and traditional vegetables (amaranth, mustard, radish) at different growth and consumption stages: (a) sprouts, (b) microgreens (seedlings harvested when the first true leaves appear) and (c) fully grown plants. The comparison includes land­races from AVRDC’s genebank and modern cultivars available commercially. Should this research prove that local vegetable varieties have higher nutrient levels than modern cultivars of the same crop species and that sprouts and microgreens are characterised by a higher phytonutrient content than fully grown vegetables, this specialty produce would then be an ideal vehicle to deliver exceptional flavour and taste, and high phytonutrient content to consumers with micronutrient deficiencies. As sprouts and microgreens are usually consumed raw, there is no loss or degradation of heat-sensitive micronutrients through food processing. An additional advantage of sprouts and microgreens is the fact that they can easily be grown in urban or peri-urban settings where land is always a limiting factor.

AVRDC also worked on simple production schemes for small-scale production of sprouts and microgreens. The findings can be summarised as follows:

Sprouts are grown in the dark in water. Microgreens are produced under light, either in soil or soil substitutes derived from organic or inorganic substrates. Another alternative for microgreen production is the use of troughs with hydroponic nutrient film from which plants can be easily pulled for harvest and eaten whole with roots.

Microgreens require a lower seed density than sprouts. One or two days after germination, the seedlings are grown under light with good air circulation and normal humidity levels. These conditions make microgreens less prone to bacterial contamination than sprouts. Seed must be kept moist at all times to facilitate complete germination. Clear plastic is a good cover for microgreen containers during seedling emergence and provides a mini-greenhouse effect. Once the seedlings have fully emerged (2–3 days), the plastic cover is removed.

Morning hours are best for harvesting the tender sprouts and microgreens and only the amount required for the daily meal should be collected as levels of vitamins decline with storage. Sprouts and microgreens can also be stored in a refrigerator for several days up to one week. Microgreens are larger than sprouts, but smaller than baby vegetables or baby greens. Compared with sprouts, microgreens have superior flavour and aroma and present a wider range of textures and colours, which are attributable to the difference in growing conditions.

The results obtained in the project will be validated in a second set of trials scheduled for 2014 to be able to assess seasonal effects and to confirm the observed trends. The consolidated findings will then be disseminated through scientific and promotional articles, press releases, trainings and field days to enhance awareness of decision-makers and the general public with regard to the enormous potential of sprouts and microgreens to contribute to healthier and more diverse diets.