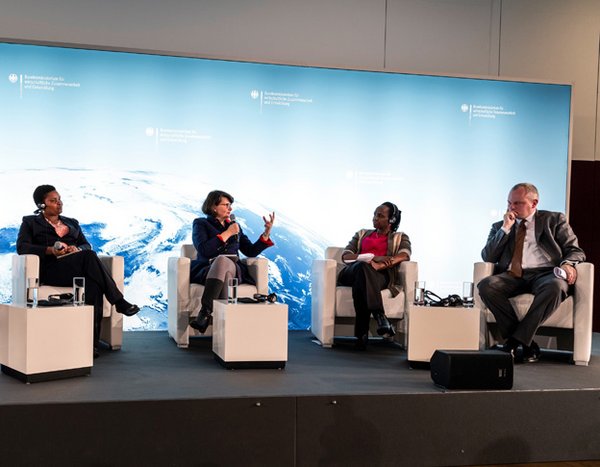 Solutions by Africans for Africans

The Alliance for a Green Revolution in Africa (AGRA) has announced in its strategy for 2017–2021 to “support 30 million smallholder farm households in eleven countries to increase their incomes and improve their food security”. At its annual Board Meeting in the beginning of December 2018, the members discussed strategies for growth and productivity in Africa with representatives of German politics and industry.

The call for a “uniquely African green revolution” by former UN Secretary General Kofi Annan resulted in the founding of the Alliance for a Green Revolution in Africa (AGRA) in 2006. This year’s Board Meeting of the organisation was held in Berlin/Germany. At the invitation of Germany’s Development Ministry, the Board Members discussed the potentials of Africa’s rural areas and options to raise them with representatives from politics and business. One aim was to attract investments to the continent.

Strive Masiyiwa, an entrepreneur from Zimbabwe and Agra Board Chair, reminded the meeting of two convictions held by Annan that reflected the work of AGRA: the fact that “the hoe belongs to the middle ages” and the need to overcome high youth unemployment on the continent in order to prevent the emergence of an entire generation of economic migrants. These were demands that were also referred to by Maria Flachsbarth, Parliamentary State Secretary at the German Development Ministry, as cornerstones of German development co-operation for the transformation of African agriculture.

“Profit must be generated locally”

Young African farmers saw themselves as entrepreneurs and needed good training, financing, mechanisation and smart farming solutions, Flachsbarth stressed. In addition to promoting innovation and productivity, infrastructure development and supporting professional associations and networkers (“farmers know best what they need”), it was important to expand trade. Africa had a mere two-per-cent share of world trade, and only 14 per cent of goods produced in the continent were part of inner-African trade. “Profit must be generated locally,” said Flachsbarth.

What is the unique African way?

“The way we do business has to reflect the uniqueness of the continent,” Agnes Kalibata, AGRA President, maintained. Whereas, for example, two crops were enough for the success of the Green Revolution in India, the African green revolution had to consider the extremely different global environment on the continent. This was why here, the organisation was doing research on 18 commodities, including millet, cowpeas and beans. It was important for the development of the sector to increase the value of the commodities and the return on investment in labour, Kalibata claimed.

Maria Isabel Andrade, AGRA Board Member and recipient of the World Food Prize 2016, stressed the importance of plant breeding, especially when it came to combating malnutrition – a phenomenon affecting two billion people world-wide. Forty-four per cent of children in Africa suffered from micronutrient deficiencies which prevented them from reaching their full potential, Andrade explained. One way to address this was biofortification, enriching crops with specific nutrients via plant breeding. For example, 22 varieties of orange-fleshed sweet potato were developed between 2011 and 2016 that were not only fortified with beta carotene, a vitamin A precursor, but were above all drought-tolerant. A mere 100 grams of these sweet potatoes would be enough to cover an individual’s vitamin A requirements for five days. Today, 4.5 million households in 14 African countries are receiving biofortified varieties. However, plant breeding was a tedious venture, which was why AGRA had developed an accelerated breeding scheme in co-operation with a German breeding company. In the coming year, a variety with an enhanced zinc content was to be worked on.

Of risks and role models

AGRA officials would like to see more of these collaborative efforts. However, Stefan Liebing, Chairman of the German-African Business Association, displayed a more reserved attitude. Especially for German medium-sized businesses, the risks that investments in the African continent entailed were very high. In Nigeria, for example, more than 100 German firms were selling machinery, but investors were needed to invest in factories or other major plants there. In order to convince more than 400,000 businesses holding the potential to invest in Africa that this was really worthwhile, success stories of entrepreneurs were required. Moreover, they needed safeguarding from the risks they would be facing, Liebig noted. Whether and how the investment fund totalling one billion euros announced by German Federal Chancellor Angela Merkel in late October 2018 would really be made use of by the small and medium-sized enterprises it was intended for remained to be seen.

The Alliance for a Green Revolution in Africa (AGRA) was established by the Bill & Melinda Gates Foundation and the Rockefeller Foundation in 2006. According to the organisation, its work primarily focuses on smallholder farmers. Instead of replicating food production strategies from Asia or Latin America, it is pursuing a uniquely African green revolution tailored to the needs and aspirations of the diverse continent, recognising the importance of sustainability as called for by the late Kofi Annan in 2006. According to AGRA, thanks to its efforts during the last twelve years, over 15 million farm families now have access to inputs, training, financing, and markets. The organisation has also supported the establishment of local African agriculture business, including nurturing 112 African seed companies. Co-operation with scientists has resulted in the generating of over 650 new crops with traits specifically selected for local growing conditions. For more information: AGRA Website