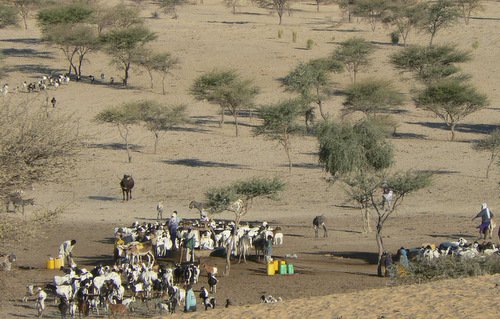 An estimated 2 billion people, 90 per cent of whom are in developing countries, live in drylands.
Photo: © Dining for Women/Flickr.com

Snapshot on trees in the world's drylands

A detailed snapshot on trees, forests and land use in the world's drylands is provided by a new FAO study.

Trees are present with hugely varying densities on almost one-third of the world's 6.1 billion hectares of drylands, which cover an area more than twice the size of Africa. Almost 18 per cent of this area contains forests. These are some findings by a study of the Food and Agriculture Organization of the United Nations (FAO). The study's preliminary findings were published in July 2016. The full report will be launched later this year.

An estimated 2 billion people, 90 per cent of whom are in developing countries, live in drylands. Recent studies have indicated the need to restore these areas to cope with the effects of drought, desertification and land degradation.
Until now, there has been little statistically based knowledge on dryland trees - particularly those growing outside forests - despite their vital importance to humans and the environment.

The leaves and fruit of trees are sources of food for people and fodder for animals; their wood provides fuel for cooking and heating and can be a source of income for poor households; trees protect soils, crops and animals from the sun and winds, while forests are often rich in biodiversity.

The study indicates that grassland constitutes 31 per cent of land use in drylands, forests 18 per cent, cropland 14 per cent, wetland 2 per cent and human settlements 1 per cent. The largest portion, 34 per cent, which is categorised as "other land", consists largely of bare soil and rock.

Some preliminary findings of the FAO Global Drylands Assessment:

Trees outside forests are present on 1.9 billion hectares of drylands (31 per cent of the global drylands area), if all land with more than 0 per cent crown cover is included. Thirty per cent of croplands and grasslands have at least some crown cover, as do 60 per cent of lands classified as settlements.