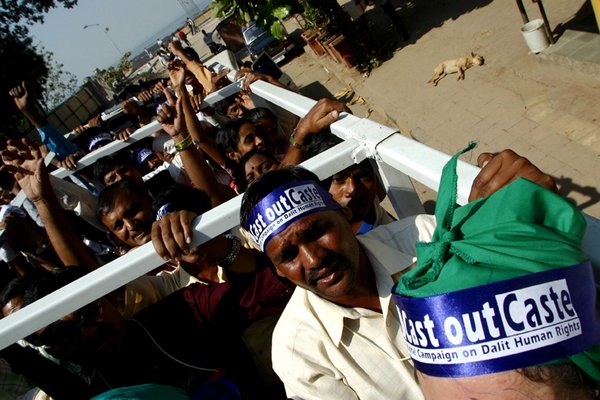 Protest against the caste system in Bombay.
Photo: © M. Nascimento/laif

Civil society organisations are seeing their activities increasingly curbed by governments. Actors from the Böll Foundation’s partner countries reported on how this global trend is reflected in day-to-day civil society practice.

There are reports from many countries that civil society organisations are seeing their activities increasingly curbed by governments. More and more often, activists campaigning for human rights, social justice or environmental protection are faced with open or indirect threats. This development, which is often referred to as shrinking space or closing space, has long ceased to be a phenomenon observed solely in authoritarian regimes, as was demonstrated at an event organised by the Heinrich Böll Foundation in Berlin/Germany.

“There is nothing new about civil society being faced with repression,” said Böll Foundation Chair Barbara Unmüßig, opening the event in late April 2016. Unmüßig maintained that there were almost daily incidents of civil society actors being put under pressure and intimidated by governments. This was happening via a wide range of channels: via malicious campaigns in media forced into line (with the representatives of civil society often being referred to as “Western agents” violating local values or inciting people to do so), but often also via laws. Unmüßig stated that more than 60 laws were in force world-wide governing the activities of NGOs. However, anti-terror laws were also increasingly being used to take action against undesirable actors. Or strict media laws were being adopted to prevent any form of networking. State repression was also practised via secret services, the police or private security firms.

These measures above all target human rights activists, but also women’s rights campaigners and environmental activists. Individuals are delegitimised, persecuted, arrested, and in the worst case, murdered, like Honduran environmental activist Berta Cáceres recently. Cáceres had engaged involved in campaigns against dam projects in indigenous settlement areas.
According to Barbara Unmüßig, one of the reasons for this development is changes in global power relations. With the emerging economies, new actors have appeared on the scene who seek to decide for themselves how they want to handle civil society. In addition, the economic elites of several countries are perceiving threats to their power status and are looking for pretexts to nip any protest or new organisations in the bud. “Numerous governments can no longer remember that they must also comply with international law, which forbids action against civil society,” Unmüßig commented.

Actors from the Böll Foundation’s partner countries reported on how this global trend is reflected in day-to-day civil society practice. Henri Tiphagne is a lawyer and is Executive Director of the human rights organisation People’s Watch in the Indian Federal State of Tamil Nadu. He is supporting efforts to subject India to the Universal Periodic Review (UPR), a tool introduced in 2007 by the UN Human Rights Council to assess the human rights situation in all 193 UN member countries. Following a journey on which he had accompanied Margaret Sekaggya, former UN Special Rapporteur on the situation of human rights defenders and Executive Director of the Human Rights Centre Uganda, his organisation’s office was inspected, and in July 2012, the organisation lost its registered NGO status. The banking accounts were repeatedly sequestered, 100 staff had to be dismissed, and the equipment had to be sold. The then Indian government justified its action by referring to the law on foreign funding of NGOs.

In addition to restricting the freedom of association and freedom of assembly, closing down the Internet and the social media is a further frequently resorted to means of preventing communication in civil society, as Margaret Sekaggya demonstrated with the example of Uganda. During the Presidential elections in February, the Government simply imposed a social media ban rendering Facebook, Twitter and Whatsapp inaccessible for three days. The government maintained that the measure was aimed at eliminating “security risks” and checking the “forwarding of misinformation”. In Kenya, too, the use of social media has made much progress, which the current government is taking advantage of, according to Gladwell Otieno, Director of the Africa Centre for Open Governance. Initially, teams of young people were used to support the election campaign via the social media. And precisely these young people were now being officially integrated in the government to take action against civil society by using these media, Otieno explained.

Amnesty International’s Secretary General Selmin Çaliskan explained what happens when civil society loses more and more rights and is depoliticised. Non-governmental organisations are then unable to exercise their important watchdog role, for in order to draw attention to violations of rights, they have to be independent.  In addition, a key advisory body is no longer available to politics, for the NGO representatives provide valuable expertise. And civil society is an important forum for various frequently marginalised groups that are without a political lobby and without money and therefore unable to make themselves heard. “Ultimately, the oppression of peaceful participation is going to result in political instability and violent conflict,” Çaliskan maintains. Human rights and political rights must not be pitted against each other for the sake of not embarrassing friendly governments or not jeopardising economic partners.

Towards the conclusion of the event, Henri Tiphagne demonstrated that the United Nations still had to do its homework as well. The International Dalit Solidarity Network (IDSN), which advocates for Dalit human rights, has now been applying in vain for eight years for a consultative status at the United Nations Economic and Social Council (ECOSOC). Early in June, the UN Committee on NGOs deferred the application for the 18th time because India came up with two more questions to IDSN. Since 2008, India had asked 77 questions, many of them repetitive and previously responded to, Tiphagne explained. Without ECOSOC status, NGOs cannot present statements or organise side events at UN forums.