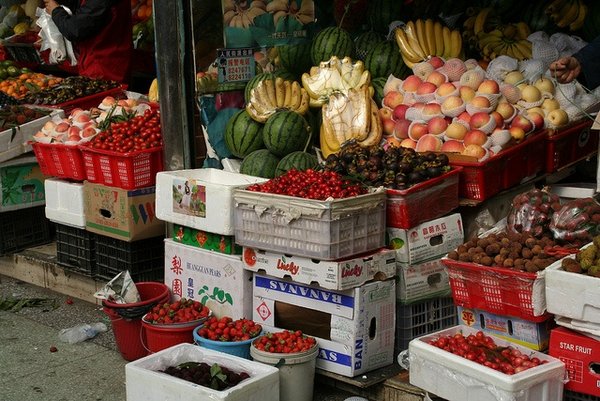 Urbanisation is making rapid progress in China. Already, there are 170 cities with more than a million inhabitants. Many urban consumers buy their food straight from the agricultural wholesale markets. Increasingly, however, they are opting for direct links with the farmers.

With its more than 1.3 billion inhabitants, China is one of the most important markets for agricultural products. The 20 per cent of the global population living there have to manage with just ten per cent of global farmland and six per cent of the Earth’s water reserves. Nevertheless, the country has more or less maintained its own food supplies. Grain for human consumption is grown almost exclusively in China.

With 162 million hectares of arable land, 17 per cent of the country’s total area is used for agriculture, and grain is grown in two thirds of it. At 50 per cent, the degree of mechanisation equals that of agriculture in industrialised countries. Therefore, the biggest requirement for modernisation that China had defined in the agricultural sector was in the area of engineering and management, said Niu Dun, Permanent Representative of the People’s Republic of China to the Food and Agriculture Organization (FAO), at the China Forum held by the Global Forum for Food and Agriculture (GFFA) in Berlin/Germany in mid-January.

In the Middle Kingdom, there are 170 cities with more than a million inhabitants. Alone the metropolitan area of Shanghai is home to 23 million people. At the same time, during the last ten years, around 900,000 villages have disappeared. China seeks to turn migrant workers into city-dwellers and is opting for increasing urbanisation.

According to the Chairman of the Agricultural Wholesale Markets Association, Ma Zengjun, wholesale markets channel the flow of food into the city. He maintains that their significance in terms of food supplies for the urban population is growing whereas that of the food retail trade is lagging behind in comparison. Alone Beijing has more than 100 wholesale markets, and there are 4,000 throughout the country as a whole.

Here, consumers can also buy their supplies. Logistics will be one of the challenges in the future. As Ma Zengjun explains, the difference to Europe is that “the Chinese use their mouths to eat and the Europeans their brains”. Chinese people love diversity, which they will only find in the wholesale market. Fewer than ten varieties of lettuce in a supermarket are regarded as a “small range”.

It was not just the scandal caused by milk contaminated with melamine in 2008 that deeply rocked the confidence of the Chinese in local products. Environmental pollution has also become a major topic. This is why an opposition movement has emerged in the cities seeking to promote closer links between smallholders and consumers with Community Supported Agriculture (CSA). Shi San, Director of Shared Harvest Ecological Agriculture in Beijing, reports that urban-dwellers are even prepared to travel up to 40 kilometres by bus in order to get out of the city to obtain “better” food.

People rent around 30 square metres of land on farms and grow their food there themselves or have their plants looked after by “their” farmers. What motivates them to do this is that in their own lots, the farmers use no pesticides or fertilisers. These are only applied on the land reserved for marketing. CSA products also attract customers in the retail sector. Shi San maintains that they are between 50 and 100 per cent more expensive than conventional food but 50 to 60 per cent cheaper than organic products.

Even though CSA co-operatives are able to provide food for up to 800 people, supplies for the urban population continue to depend on the major enterprises. Various projects have demonstrated that Chinese farmers are also able to produce more quality at better prices using just half of the usual input. The German-Chinese Agricultural Centre opened last year plays a key role in this context. To Dr Franz-Georg von Busse, Chairman of the German Agribusiness Alliance, this is a signal for both sides. Von Busse maintains that sharing information and services can promote the modernisation of Chinese agriculture without leading to harmful side-effects. For example, the engineering firm aquagroup AG is running experimental fields for organic farming in order to minimise the use of copper against fungal diseases in plant cultivation. New products and crop rotation have reduced copper applied in the smallholders’ demonstration fields, covering a total area of 400 hectares, from 3,000 to 300 grams per hectare.

New land management systems, agricultural engineering and irrigation methods affect not only the multitude of smallholders but also agriculture in the north of the country, with its large farms. China has recognised agriculture as a driver of growth and prosperity in rural areas and is pursuing a policy of “rural reconstruction”, says Kasper Thormod Nielsen, Commercial Director of the Danish dairy producer Arla Foods.

However, the GFFA Forum has also demonstrated that food security is a dominant topic in China. Agriculture can only gain acceptance again among the urban population by restoring consumer confidence. In 2011, China developed traceability systems for meat and vegetarian products and still has to improve its checks. Ma Zengjun promises that wholesale markets are going to play a major role in this context.