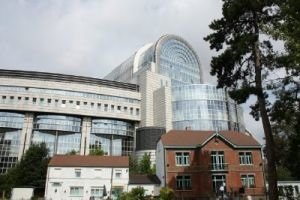 Back side of the European Parliament.
Photo: Roland Krieg

To mark World Food Day, the 16th October, the European Parliament’s Committee on Development and Cooperation invited experts to discuss the topic of food security and migration. The meeting highlighted just how diverse the reasons for migration are and how important an integrated policy is for rural regions in order to create prospects for people to stay.

According to the United Nations report “The State of Food Security and Nutrition in the World 2017”, released last September, food insecurity is once again on the increase, with 815 million people going hungry. In detail, it refers to conflicts and wars as drivers of the trend in combating hunger, which has reversed again for the first time in ten years. Alone between 2015 and 2017, the number of people suffering hunger in conflict regions had risen from 80 to more than 108 million people, Arif Husain of the World Food Program (WFP) told the Members of the European Parliament at its Committee on Development and Cooperation, which discussed the link between hunger and migration in mid-October.

Hardly more than ten crises had triggered the new dimension. In Syria, for example, after civil war had broken out, people migrated three to five times within Syria before they sought refuge in neighbouring Lebanon. Only the continuing inactivity of the international community caused the people to then set off for Europe in 2015. According to Husain, there is a finance gap in humanitarian aid resulting in 40 per cent of demand not being covered. While aid is increasing in absolute terms, demand is growing even faster. Husain warns that should the crisis situation prevail, the Agenda Sustainability Goals will not be achieved within the remaining 13 years.

According to Paulina Bizzotto Molina, in the Sustainable Food Systems Team of the European Centre for Development Policy Management (ECDPM), the armed conflicts are shifting the topic of migration exclusively into the focus of security policy. However, she maintains, migration belongs to development. The lack of employment, insufficient income and the absence of social security for people are reasons for migration that chiefly remains in their own country. This can be remedied by the development goals aimed at countering structural weaknesses, such as those addressing education and environmental protection, while jobs have to be created in the cities. These are elements of an intelligent policy, Molina argues. Donors ought to develop regional institutions and make use of those already available.

Cristina Amaral, who heads the UN Food and Agriculture Organization’s liaison office with the EU, added that it was above all young men from rural areas who joined external migration, while the women were left behind, resulting in a long-term feminisation of agriculture. A territorial development approach had to create a bridge between the urban and the rural sectors, Amaral demanded, with policies for rural regions having to be addressed in all policy departments.

Amaral calls for a reorientation of agriculture as a development goal. World-wide, 85 per cent of smallholders are farming less than two hectares of land. While these smallholdings have a higher soil and water use intensity, their labour productivity is very low, and has to be raised given the limited natural resources available. This in turn would require changes in farming methods, which could enable the development of a value chain reaching towards networking with the cities.