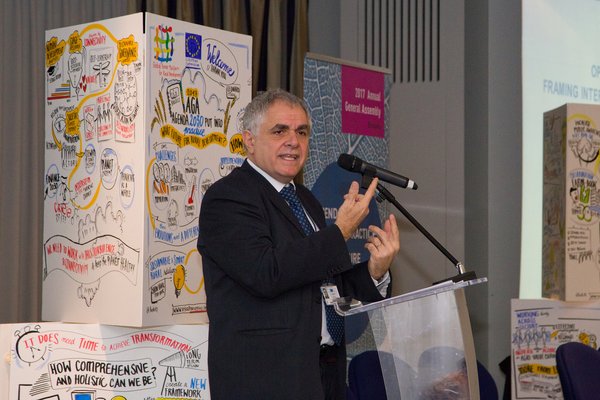 Rural development in the light of the Agenda 2030

This year’s Annual General Assembly (AGA) of the Global Donor Platform for Rural Development focused on the transformation of rural development in the light of the Sustainable Development Goals. The organisers of AGA define rural transformation as a process of change in rural areas that is to be not only economic, but also social, cultural, political and environmental.

Early in February 2017, the Annual General Assembly (AGA) of the members, partners and friends of the Global Donor Platform for Rural Development was held in the Belgian capital of Brussels. Around 100 representatives of the platform gathered at the AGA 2017, among them representatives of the World Bank, the German Federal Ministry for Economic Cooperation and Development (BMZ), USAID and the World Trade Organization (WTO).

The AGA participants embarked on a journey into the future, and, from the future perspective of 2030, they discussed the dynamics, drivers and uncertainties of structural transformation, also against the background of the Sustainable Development Goals, referred to as well as Agenda 2030.

And for many participants, this view initially appears to be rather promising. The population has continued to grow up to 2030, and food production has assumed ever greater importance. After decades of stagnation, many African countries can at last demonstrate good economic growth.

A further positive trend that the participants identified from their 2030 perspective was that the number of smallholders integrated in value chains had increased. This above all applied to the cocoa und cotton value chains. However, a considerable development potential still existed here, above all with regard to the production of niche articles and in organic agriculture.

As positive as the forecast for 2030 may seem at first glance, the challenges are still enormous.

The future prospects for Africa’s rural regions centred on the drastic increase in the number of young people and their expectations of their livelihoods, the growing importance of secondary cities, financing food systems, access for smallholders to value chains and markets and, last but not least, the major topic of training and further education in a rural context.

Responding to the question of what the farmer of 2030 could look like, the panel members maintained that she would be mainly female and elderly. If life in rural areas didn’t become more attractive for young people in the near future, i.e. if modern technology, financial services and new jobs outside agriculture were not introduced, young men in particular would continue to leave their villages, seeking better income and better living conditions. With these prospects, the two Co-chairs of the Global Donor Platform, Shantanu Mathur of the International Fund for Agricultural Development (IFAD) and Mauro Ghirotti of the Italian Agency for Development Cooperation outlined their view of the future.

As yet, development co-operation has not focused on the important role of secondary cities, where people from the surrounding regions can find schools, health centres as well as banks, shops, restaurants or cinemas and other entertainment. And not only the big agglomerations but also small towns are important markets and locations for small and medium-sized industries with a corresponding demand for jobs outside the agricultural sector.

The role of women in the agricultural sector was also being underestimated. Beatrice Byarugaba of Uganda’s Ministry of Agriculture and Esther Mwaura-Muiru of the Kenyan women’s movement Groots are reckoning with  a major share of family farms in East Africa being managed by women by 2030. At the conference, they above all demanded practically oriented extension services, especially for women farmers. They urgently required consulting tailored to their needs, Mwaura-Muiru stressed, criticising that the government extension services usually only employed consultants holding a university degree who were not familiar with the problems small farms were facing, let alone with those of women farmers.

A viable agriculture requires a range of business and social financial services that are adapted to rural conditions. Addressing the participants of the Annual Assembly in Brussels, Roberto Ridolfi, Director for Sustainable Growth and Development of the EU Commission, demanded that donors had to provide the necessary enabling environment for this. In the context of the New Consensus for Development“, which was to be presented in May, the EU intended to provide new financial instruments for rural areas in African countries via a development fund, said Ridolfi in Brussels.

In order to ensure that financial support really reached the rural households, it was necessary to co-operate with local banks and enhance the professional skills of bank staff at local level. Furthermore, in keeping with Agenda 2030, there was an urgent need to create access for the inhabitants of rural regions to social security systems such as health and life insurance as well as insurance against natural disasters, the conference participants demanded.

More information on the Global Donor Platform for Rural Development