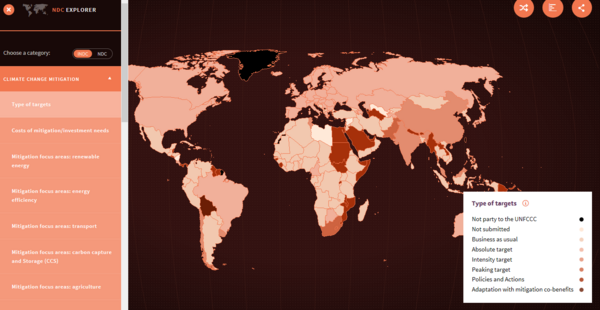 A new online tool has been developed for international climate policy. The NDC Explorer can be used to compare efforts to combat climate change across the world.

In 2013, the United Nations Framework Convention on Climate Change (UNFCCC) called on individual countries to come up with national contributions to counter temperature rise and the effects of climate change. A total of 163 countries submitted climate plans, referred to as (Intended) Nationally Determined Contributions or (I)NTDs, stating their strategies. The (I)NDCs have become a key instrument in implementing the Paris Agreement, negotiated by 195 countries in the French capital in 2015 and have since been signed by all participating parties.

The NDC Explorer can be used to measure the (I)NDCs in 60 different categories, ranging from emissions through adaptation to climate financing. It allows data to be visualised with bar charts. (I)NDCs can be compared according to regions and income groups, and individual views of the tool’s world map as well as the bar charts can be downloaded for presentations and publications.

The new tool was developed by a team of 16 researchers representing four different organisations and headed by Peter Pauw of the Environmental Policy and Natural Resources Management Department at the German Development Institute (DIE), based in Bonn. The scientists have started to feed their analysis of all (I)NDCs into a data bank to make them available to everyone seeking to actively contribute to combating climate change. The researchers have co-operated with the African Centre for Technology Studies (ACTS), the Stockholm Environment Institute (SEI) and the UNFCCC in developing the tool, and they have been supported by the German Federal Ministry for Economic Cooperation and Development (BMZ).

“NDCs are key instruments to achieve the objectives of the Paris Agreement and to move towards a low-emission and climate resilient future,” says Claudio Forner, Team Lead, Mitigation Support, of the UNFCCC Secretariat. “Understanding NDCs and navigating the information that is communicated in NDCs is critical for their implementation and will help to enhance the ambition of global efforts over time. The new NDC explorer provides easy access to all INDCs and NDCs and will allow stakeholders to navigate through the information that has been communicated by governments and to look at it from different perspectives.”