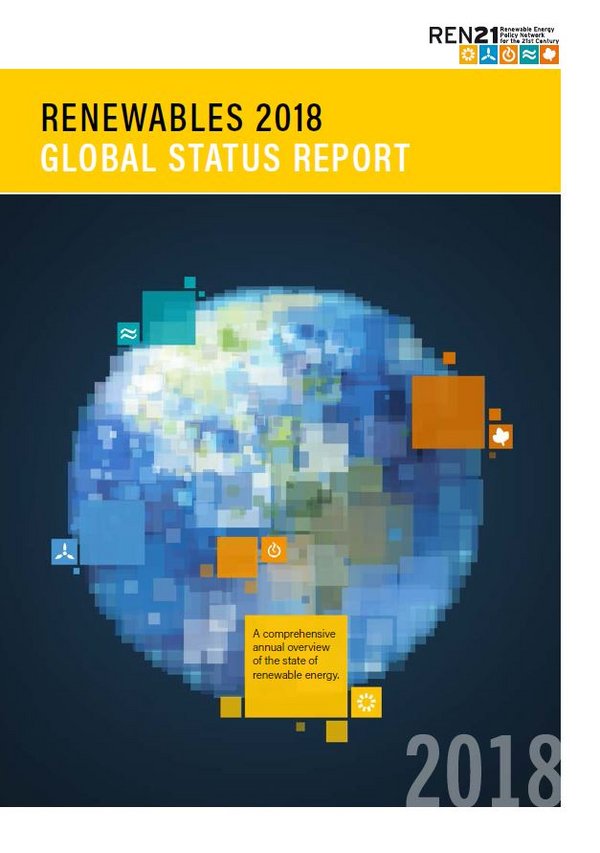 The global network REN21, with over 900 international experts, has published the Renewables 2018 Global Status Report. Key findings are that innovations towards a renewable energy future exist, but and not fast enough to reduce emissions in accordance with the Paris Agreement.

In 2017, renewable power accounted for 70 per cent of net additions to global power generating capacity, but global energy-related carbon dioxide emissions rose by 1.4 per cent, after three years of holding steady. The increase in carbon emissions was the result of robust global economic growth (of 3.7 per cent), lower fossil fuel prices and weaker energy efficiency efforts.

This year’s Renewables 2018 Global Status Report reveals two realities: one in which a revolution in the power sector is driving rapid change towards a renewable energy future, and another in which the overall transition is not advancing with the speed needed. While momentum in the power sector is positive, it will not on its own deliver the emissions reductions demanded by the Paris Agreement or the aspirations of Sustainable Development Goal 7 – ensuring access to affordable, reliable, sustainable and modern energy for all.

The heating, cooling and transport sectors, which together account for about 80 per cent of global total final energy demand, are lagging behind.

But the news is not all bad. Renewable power generation capacity saw its largest annual increase ever with an estimated 178 gigawatts added globally. New solar photovoltaic generating capacity alone was greater than additions in coal, natural gas and nuclear power combined.

And while China, Europe and the United States accounted for nearly 75 per cent of the global investment in renewable power and fuels, 2017 saw significant investment in developing country markets. When measured per GDP unit, the Marshall Islands, Rwanda, the Solomon Islands, Guinea-Bissau and many other developing countries are investing as much as or more in renewables than developed and emerging economies. These positive developments need to be scaled up for a global energy transition.

Corporate sourcing of renewable power is also on the rise. Initially, many companies saw the adoption of renewable energy solutions mainly as an act of corporate social responsibility. Significant reductions in renewable energy costs, however, as well as maturing market and policy environments, have made renewables cost-competitive and attractive sources of energy in their own right. As this year’s report shows, corporate renewable energy sourcing has moved beyond the United States and Europe and is now found in countries such as Burkina Faso, Chile, China, Egypt, Ghana, India, Japan, Mexico, Namibia and Thailand.

Tracking the evolution of small-scale solutions

Better reporting is needed to reflect the myriad developments happening on a small scale and in end-use sectors. Grassroots efforts, decentralised solutions, innovation, start-ups, off-grid applications, and solar thermal and other activities are not visible when reporting at the global level, yet collectively, they make a significant contribution. These developments offer opportunities for scaling up and furthering the transition in the energy system. Collecting data and tracking the evolution of small-scale solutions as well as how renewables are being used in key sectors such as transport and agriculture must be a new priority.