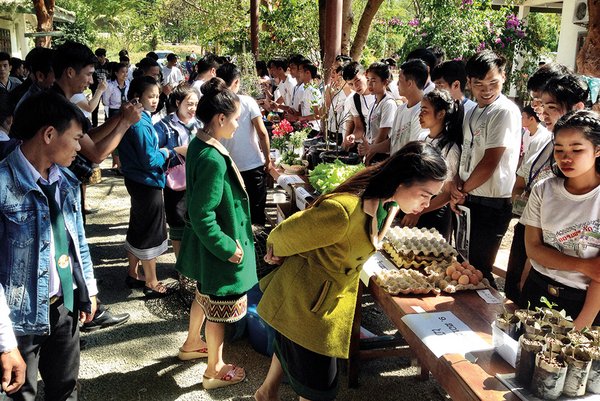 The participants of the competition presenting their prototypes.
Photo: Andrew Bartlett

Rural advisory services cannot (and should not) tell young people what to do; but they can point to options and then support them in implementing the paths they themselves have chosen. One of these paths is agricultural entrepreneurship – a very young concept for Laos. Our authors give an account of initial experiences.

The national census for Laos shows that approximately one million people between the ages of 15 and 24 live in rural areas. Representing roughly 15 per cent of the total population of this land-locked country in South East Asia, rural youth are crucial to the future of agriculture, but mostly ignored by development programmes. The rapid transition from subsistence to commercial agriculture in Laos has been accompanied by increased connectivity (e.g. roads, phones, social media), which has brought both opportunities and problems for young people.

Compared to their parents, rural youth are better informed, increasingly mobile, and have access to a wider range of products. But they are also more exposed to the threat of trafficking, drugs, and debt, and are more likely to leave the village.

The Lao Upland Rural Advisory Service (LURAS) is a Swiss-funded programme implemented by Helvetas and the Department of Agricultural Extension and Cooperatives. In 2015, LURAS carried out focus group discussions as part of baseline studies in a number of mountainous villages. In all locations, parents said they did not want their children to continue in farming. Villagers repeatedly stated that farming was hard and dirty work, with uncertain returns. They see themselves as having low social status and few opportunities for advancement. The lack among villagers of self-esteem or a positive vision for the future of farming is worrying regarding agricultural development efforts in Laos. However, the LURAS study also finds that most farmers in the uplands now want to send their children to school, which was not the case a few years ago. Parents see that the value of education is to ensure that children can get a job outside of the village and send money back home.

Children share the aspirations of their parents. As part of a recent documentary supported by LURAS, interviews were conducted with young people across the country. Nearly all of them would like to get jobs with the government (army, teachers, officials, etc.), which is seen as a secure source of income. However, in reality, most of them are likely to end up in far more precarious forms of employment such as unskilled labourers on plantations, in construction and factories, or in parts of the service sector. If work is not available in Laos, young people often seek employment across the border in Thailand.

The aspirations of the young generation count

The future of smallholder farming and the economy of the Lao uplands depends on the options open to rural youth. Development programmes such as LURAS cannot stop the tide of young people leaving rural areas, but they can help ensure that sufficient numbers remain with the skills and motivation crucial to the long-term viability of smallholder farming and a healthy rural economy.

Evidence suggests that the children of farmers in the uplands of Laos want to escape drudgery, earn cash and get access to the products of a modern life. And like all young people, they also want greater independence, self-respect and a chance to do something different from their parents. But should rural advisory services be helping young people become better farmers, or should they be helping them get out of farming?

Perhaps the answer is to help them acquire knowledge and skills allowing them to make better choices for themselves that are safe and decent, productive and rewarding, wherever they decide to go.

If government and the development partners want to create a green rural economy, agricultural development programmes will have to focus more on rural job creation and enterprise development, and support initiatives that young people plan and manage themselves. This is a challenging task, but for farming communities to remain a viable and vibrant part of Lao society, rural youth need local opportunities to earn money, be creative and enjoy themselves.

‘Agripreneurship’ – a new idea for Laos

The agripreneur concept, bringing together farming and entrepreneurship, has been part of agricultural extension services in countries as diverse as Nepal, Nigeria and the USA for some years. The Global Forum on Agricultural Research (GFAR) has been piloting a Young Agripreneurs Project (YAP). The Global Forum on Rural Advisory Services (GFRAS) recently produced training modules on agripreneurship. This is a very new idea for Laos, where agribusiness is dominated by petty traders and big investors, with very little happening in the middle, where micro-enterprises could add value to local produce. LURAS staff believe that this is where the opportunities for rural youth lie.

Agricultural colleges are an ideal launch pad for students and graduates seeking to develop their own agribusiness. These prospective agripreneurs can learn about business planning and develop prototypes of new products in a relatively risk-free environment. With this in mind, LURAS joined forces with other organisations in 2016 to launch the AGREE scheme at the Northern Agriculture and Forestry College (NAFC) in Luang Prabang. AGREE stands for ‘Agripreneurs for Green Rural Enterprises and Economy’. The focus on green agribusiness reflects the government’s policy of promoting clean, safe and sustainable agriculture.

In collaboration with the private company Enterprise Development Consultants (EDC), the first stage of the AGREE scheme was designed and managed as a competition between teams of students. This approach generated a high level of enthusiasm and creativity. And the fact that Helvetas has for some years been supporting capacity-building at the college meant that a critical mass of capable and willing teachers was already in place. The competition started with proposals from 52 teams, twelve of which were selected to attend a series of weekend workshops. Products developed by the finalists included out-of-season limes, frozen frogs’ legs, vermiculture compost, egg trays made from recycled paper, ornamental plants and rice-fish farming. The winning team of students received 800 US dollars for developing a business plan and prototype for herbal tea made from the flower of the butterfly pea (known as dok angsan in the Lao language).

However, the partner organisations face a tougher challenge in the second stage of AGREE, during which graduates are mentored while launching their business in the home locality. Small grants will certainly help get these agripreneurs started, but equally important are partnerships with more experienced producers and processors, and backstopping in the form of an AGREE hotline and social media group.

What we are learning

The AGREE scheme in Laos is little more than a year old, but Helvetas has already learned some valuable lessons about promoting agricultural entrepreneurship among young people: