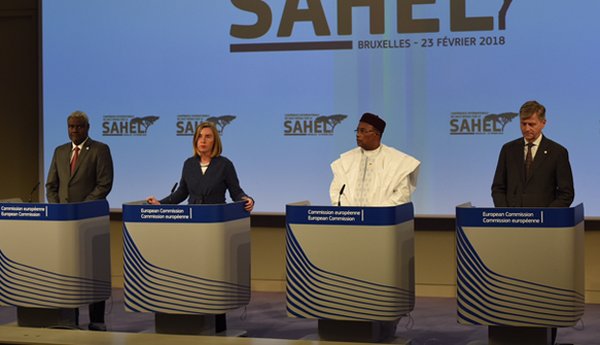 At a High Level Conference with the Burkina Faso, Mali, Mauretania, Niger and Chad, known as the G5 Sahel countries, in late February 2018, the European Union agreed to provide a further 414 million euros for peacekeeping for their Joint Security Force.

In 2014, Burkina Faso, Mali, Mauretania, Niger and the Republic of Chad founded the “G5 of the Sahel Zone” group. The aim was to achieve closer co-operation to jointly take on the challenges the countries are facing, including extreme poverty, terrorism and human trafficking. The EU supports the G5 and has earmarked eight billion euros for development co-operation between 2014 and 2020. At a High Level Conference in late February 2018, it reiterated its commitment to help the G5 countries of the Sahel Zone with creating the preconditions for more stability in the region. A further 414 million euros was agreed for the support of the G5 Sahel countries’ Joint Security Force.

In particular, support is to be provided for the peace process in Mali. Here, one of the projects (PROJES) aims to promote stabilisation and socioeconomic recovery by strengthening the supply and access to basic services. PROJES – the French acronym for “Youth and Stabilisation Programme” – is to complement notably PARSEC, the “Programme d’Appui au Renforcement de la Sécurité dans les Régions de Mopti et Gao et à la gestion des zones frontalières”, run by Deutsche Gesellschaft für Internationale Zusammenarbeit (GIZ). It is intended to enable the Malian government to restructure its domestic security forces and re-establish the rule of law in insecure areas. A budget totalling 30 million euros has been earmarked for this.

Employment is the top priority

Further national strategies were agreed to implement the multitude of tasks at the Conference. The focus will be on the fields of infrastructure, resilience and human development. A further six billion euros was pledged for the 2018 to 2022 period by the Sahel Alliance of five EU countries, the EU itself, the African Development Bank and the United Nations Development Program (UNDP). The top priority is to develop employment by creating a million jobs for young people and linking a further 1.4 million households to the electricity grid.

The G5 countries noted that security measures would not be successful without overall development and without the return of government services in fragile regions.

The Conference was held under the umbrella of the European Union, the United Nations, the African Union (AU) and the G5 Sahel Countries.