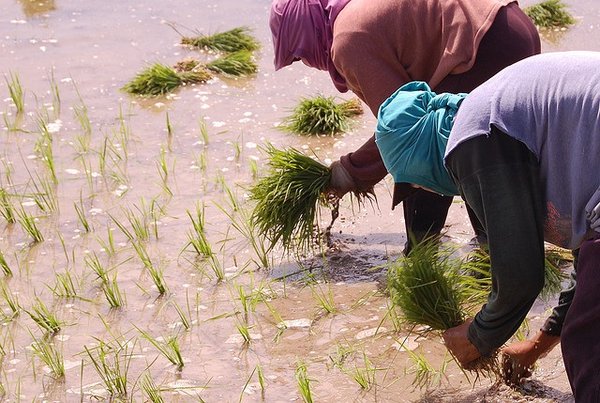 The Better Rice Initiative (BRIA) of the German Food Partnership is aimed at a better integration of smallholders in value chains in Thailand, Indonesia, Vietnam and the Philippines.
Photo: © S. Ciencia/flickr.com

Partnerships and the private sector in the post-2015 process – on the right track?

Multi-stakeholder initiatives are a good alternative to promote sustainable development with the aid of market economy solutions, according to some. Others claim that they bear the danger of governments shirking their responsibility and the needs of the local population being neglected. A discussion round.

One of the core elements in the Post-2015 Agenda is a global partnership for sustainable development in which government, private sector and civil society actors assume common responsibility. Is this partnership approach based on voluntary regulations suitable for contributing to solving the global problems? And which role can and should private business play in this context? A conference held jointly by the organisations Forum Environment and Development and Brot für die Welt in Berlin/Germany in late February 2015 addressed these key issues.

What development and for whom?

It is true that the private sector has long been involved in developing the rules for international cooperation. And also, more and more governments have been opting for coalitions with the private sector in their development cooperation – coalitions, which as a rule include transnational corporations and often leave out local business, as Antonio Tujan, Founding Chairman of the Peoples’ Coalition on Food Sovereignty and Managing Director of the Philippine-based organisation IBON International, criticises.
He summarised the danger that many civil society organisations see in this state of affairs: influencing public policy, undermining of governance and the implementation of measures and projects that bypass the needs of the local population. In the field of health, for example, concentrating on combating HIV/AIDS results in neglecting measures against other diseases that are often more important for individual countries (such as malaria in Rwanda) or the setting up of basic health infrastructure (such as hospital building in Ghana), Tujan maintains.

In agriculture, local business structures, such as the large public corporations for seed production and distribution that have traditionally operated in Bangladesh and India, are destroyed as multinational corporations take over activities, the all too familiar consequence being that many farmers are no longer allowed to plant their own seed. Tujan also views growing concentration processes like the tying up of supermarkets with agro-multinationals critically. In the Philippines, several thousand hectares of asparagus are grown to be sold by Japanese supermarkets. “We don’t eat asparagus,” Tujan told the meeting. If partnerships were established, a clear set of rules had to apply for them including partnership equality, democratic country ownership, inclusivity and participation, and transparency.

Neither a panacea nor the work of the devil

The question whether partnerships make sense in the first place ran like a common thread through the event. Here, according to Julian Havers, Advisor on the Sector Programme Post-2015 Agenda at Deutsche Gesellschaft für Internationale Zusammenarbeit (GIZ), one has to distinguish between the overarching “Global partnership for sustainable development”, as established in the Post-2015 Process, and based on voluntariness and joint responsibility, and individual partnerships, e.g. between the public and the private sector.

Marianne Beisheim of the Berlin-based German Institute for International and Security Affairs has taken a look at what makes such partnerships successful; to this end, she examined 21 out of a total of 348 development partnerships registered with the UN Commission on Sustainable Development (CSD). It appears that PPP projects only show success if they dispose of a minimum of bindingness, precise rules and control mechanisms. Above all, sufficient incentives in the shape of a prospective win-win situation have to be in place for all partners. Neither should participation – above all that of the local population – remain just an empty word.

All in all, however, there are mixed results, Beisheim maintains, quoting a further survey of all 348 projects: “One third of the projects only exist on paper, one third have at least done something, and one third have done something that makes sense.” Klaus Schilder, a consultant on development financing at the church relief organisation Misereor, spoke out in favour of binding standards for enterprises engaging in partnerships at UN level. In addition, human rights impact assessments should be compulsory.

GFP put to the test

The German Food Partnership (GFP), created in 2013, was discussed as an example of partnerships with the agricultural sector. Unlike with many other partnerships, it also involves medium-sized enterprises, as Martin Märkl, Senior Sustainable Development Manager of Bayer CropScience and GFP Co-Spokesman, stressed in Berlin. He referred to the example of the Better Rice Initiative (BRIA), which is aimed at a better integration of smallholders in value chains in Thailand, Indonesia, Vietnam and the Philippines.

Märkl explained the big problems that the rice sector was facing in Asia: poor income levels, a lack of young farmers, and a partly disastrous environmental impact. In the countries involved, BRIA is to ensure stable markets and sustainable production. In addition, gaps arising from the withdrawal of government extension services are to be filled – even if it is not up to the private sector to assume government responsibilities, as Märkl stresses, adding that: “Our consulting is product-neutral.”

David Hachfeld, an economics and globalisation adviser with Oxfam Germany, voiced his criticism of the GFP, maintaining that the concepts were designed for a certain target group, but not together with it. “Representatives of farmers, who ought to be centre stage, were at none of the GFP meetings,” Hachfeld said. He also criticised the technology-based approach of the initiative and the fact that with it, the German Federal Government was forfeiting far too much scope for action. Hachfeld called for seeking cooperation with companies in the countries themselves in the respective projects rather than pinning hopes on the “usual suspects”, the transnational corporations. For there was agreement among the participants in the debate on at least one issue: neither partnerships nor the private sector are bad per se.