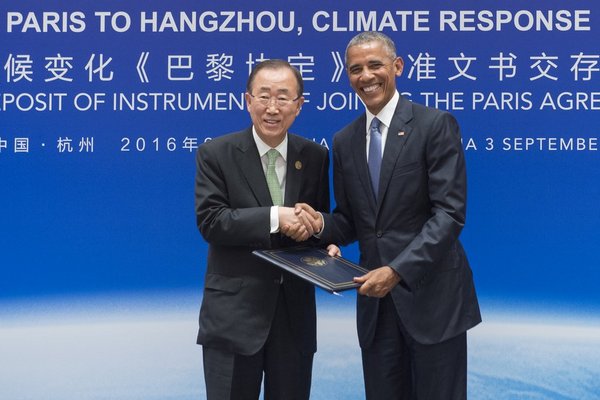 The Paris Agreement on climate change moved closer toward entering into force in 2016 as 31 more countries joined the agreement in September 2016 at a special event hosted by United Nations Secretary-General Ban Ki-moon.

Several large emitting countries which had not yet completed their domestic approval processes in time for the event also announced they were committed to joining the agreement this year.

The Paris Agreement will enter into force 30 days after 55 countries, representing 55 per cent of global emissions, deposit their instruments of ratification, acceptance or accession with the Secretary-General.

In early September, the world’s two largest emitters, China and the USA, joined the Agreement, providing considerable impetus for other countries to quickly complete their domestic ratification or approval processes.

The Indian Prime Minister Narendra Modi announced in late September at an event of his Bharatiya Janata Party that India would ratify the Paris agreement on 2 October 2016, the birthday of Mahatma Gandhi. India is the world’s third largest producer of greenhouse gas, after the USA and China.

On 22 April this year, 175 world leaders signed the Paris Agreement, the most to ever sign a treaty on a single day. By the end of September 2016, 190 will have signed the Agreement.